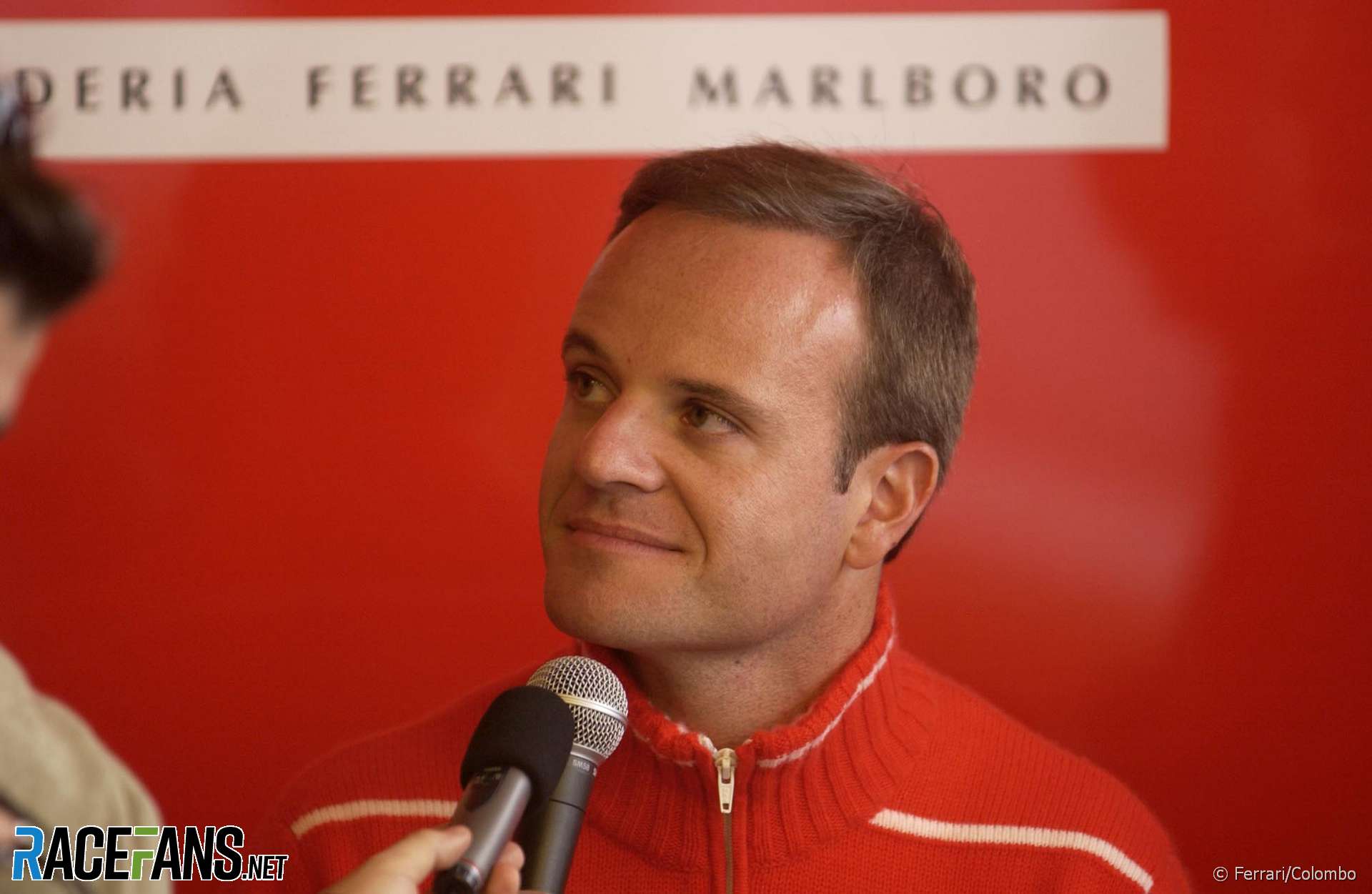 Rubens Barrichello is the most experienced F1 driver of all time. When he left the sport at the end of 2011 he had started 322 races.

He began karting in 1981, aged nine, and two years later became Brazilian Junior Karting Champion. From 1986-88 he won the Sao Paulo city and Brazilian National Karting titles every year, and set his sights on a career in motor racing.

He arrived in Europe in 1990, and won the GM Formula Opel Lotus Euroseries with the Draco team. That led to a switch to Formula Three with top team West Surrey Racing for 1991, thanks to his backing from food company Arisco.

Barrichello came out on top in a closely-fought championship that swung in his favour when rival David Coulthard suffered car problems in the penultimate round.

Barrichello’s next step was Formula 3000, where he finished second on his debut at Silverstone, with fastest lap, for the Il Barone Rampante team. Another second at Barcelona put him in the lead of the championship but Barrichello was to suffer a major crash at Enna. He spun off the very fast lakeside circuit and crashed into a rescue truck – mercifully his car was travelling backwards at the time.

The team also lost momentum with a mid-season switch of engine suppliers from Judd to Cosworth, as much for political reasons (they were hoping to switch to F1) as for competitiveness. Barrichello ended the year third over all with 27 points, the championship won by fellow rookie Luca Badoer with Andrea Montermini second.

Impressed by Barrichello’s progress through the ranks, Eddie Jordan signed him in November 1992 – the deal being sweetened further by $2m in backing from Arisco. Barrichello made his F1 debut in 1993, aged 20 years and 10 months.

Chronic unreliability made it difficult for Barrichello to shine and with five different drivers occupying the second seat the young Barrichello found himself thrust into the role of de facto team leader. He impressed with a fine drive in the wet at Donington Park and was poised to score third place when the car ran out of fuel six laps short of the finish.

The 1994 season began brightly – Barrichello was fourth at home in Interlagos and scored his maiden podium finish the following weekend in the Pacific Grand Prix. But he was devastated by the loss of Ayrton Senna at the next race, on the same weekend that Barrichello himself had a lucky escape from a violent accident.

Now Barrichello was F1’s leading Brazilian. Later that year he capitalised on rainy weather at Spa-Francorchamps to score his first pole position. Unreliability struck once again it that race but Barrichello ended the year with a fine fourth in Adelaide leaving him sixth in the world championship.

Jordan attracted a supply of Peugeot engines for 1995 and now Barrichello had a car that he could count on being good enough for points finishes – when it held together. His first points finish of the year came at round six – Montreal – where he finished a career-best second.

At the end of the year Irvine left to join Ferrari while Barrichello hung one one more year at Jordan, to be partnered by Martin Brundle. Reliability improved and points came more regularly, with Barrichello out-scoring his experienced team mate in his final season by 14 points to eight.

But now Barrichello was looking at a move elsewhere and he took up a quite different challenge for 1997 – joining the brand new Stewart Grand Prix team headed by three-times world champion Jackie Stewart. He gave the team its first podium finish with a magnificent second in the wet in Monaco, but this was the lone highlight of a year blighted by unreliability.

The following season was a wasted year with a chronically unreliable and uncompetitive car. But Stewart made a quantum leap forward for 1999 and Barrichello found himself in the sort of situations where with a bit more luck (Melbourne) or reliability (Interlagos) he could win races. But when the best opportunity to take a win came along it was team mate Johnny Herbert that delivered the maiden win for Stewart at the Nurburgring, with Barrichello third.

At the end of 1999 Barrichello was linked to a move to Ferrari, replacing Irvine alongside Michael Schumacher. Many questioned whether Barrichello was mentally tough enough to cope with Schumacher as a team mate.

Whether it was right for Barrichello or not he certainly chose the right moment to leave Stewart – the team was taken over by Ford and transformed into Jaguar, and saw a rapid reversal in fortunes.

There is no question that Schumacher was Ferrari’s primary concern, but in his time at the team Barrichello took the chance to win several races, even if some of them were gifts from Schumacher in season when he won the title earlier than usual.

Barrichello’s first win came in his first season for Ferrari and it was blessed by inspiration as well as fortune. He started a poor 18th at the Hockenheimring and was put on an aggressive two-stop strategy in a bid to help him move up the field.

The race swung in his favour when a former Mercedes employee with a grudge against the company ran onto the circuit in a bid to disrupt the Mercedes-powered McLaren’s races. That he did – his dangerous one-man track invasion caused the race stewards to send out the safety car, allowing Barrichello to complete one of his pit stops without losing track position. Barrichello then made a ballsy gamble to stay on-track on slick tyres despite a late-race rain shower and took an emotional win.

He ended the year fourth overall with 62 points to the victorious Schumacher’s 108. Although Barrichello was third in 2001 the gulf between him and Schumacher yawned wider – Schumacher scoring 123 points to Barrichello’s 56.

However Barrichello had gifted second place to Schumacher on team boss Jean Todt’s orders at Austria. The Brazilian was unhappy but afterwards told the press he would not be ordered to do the same if he were leading a race. But at the same venue in 2002 exactly that happened – Barrichello let Schumacher past within sight of the flag having led him all week, and the disgusted crowd booed the two drivers.

Although unrepentant, Ferrari took care to leave Barrichello in the lead to take a deserved win at the Nurburgring having once again led Schumacher. His team mate won the title again and then handed Barrichello victory at Indianapolis, in a bizarre last-lap fix that left the crowd as bemused as the Austrians had been angry. Barrichello was second to Schumacher at the end of the season, 144-77.

In 2003 Barrichello won twice, both times on merit, and his victory at Silverstone was magnificent. Oddly it once again followed the appearance of a spectator on the track, this time an Irish priest, but Barrichello ran riot after the restart, passing a string of cars and putting a consummate move on Kimi Raikkonen to win. His second victory of the year at Suzuka confirmed Schumacher as champion for the sixth time.

If it looked as though Barrichello was getting on terms with Schumacher, 2004 proved this was not the case. Schumacher won 12 of the first 13 races and cruised to title number seven, with Barrichello again collecting some perfunctory wins after the championship had been settled.

In 2005 the Ferrari juggernaut was halted, as much by a rules change as improvement by their rivals. Although the pair only fought for a victory at the farcical non-event at Indianapolis (Schumacher prevailed) Barrichello finally grew weary of his subservient position and was visibly unhappy when Schumacher put a brusque pass on him at the last lap at Monte-Carlo.

He signed to drive for Honda (previously BAR) alongside Jenson Button for 2006. It was an uneven season for the Brazilian, who tended to struggle with the car, while team mate Button had a strong end to the year, winning in Hungary. The team had a nightmare 2007 and Barrichello, now in his 15th season, failed to score at all.

In 2008 Barrichello became the longest-serving Grand Prix driver of all time, surpassing Riccardo Patrese’s record for the most Grand Prix starts. The new Honda was just as bad as its predecessor, but Barrichello impressed with some excellent performances including third place at Silverstone in the rain.

Barrichello wasn’t able to keep pace with Button in the opening part of the season and this cost him dearly as Button racked up six wins with none going to Barrichello’s side of the garage.

But the Brazilian driver got on terms with the car and ended a four-and-a-half year win drought by taking the European Grand Prix at Valencia. He added a second win at Monza, holding Button at bay throughout the race.

When he qualified on pole position at home for the penultimate race of the season with Button 14th it looked as though Barrichello was on course to pull off a major championship update. But it didn’t work out that way.

While Barrichello slipped down the running order Button raced into the points. A puncture for Barrichello put the result beyond doubt, and Button claimed the championship.

A change of teams beckoned for 2010 and Barrichello was announced as a Williams driver alongside rookie Nico Hulkenberg.

The car improved throughout the year and although Barrichello never reached the podium he scored points on several occasions. He also passed another milestone, becoming the first driver to start 300 Grands Prix.

But the team’s performance slumped disastrously in 2011. Barrichello scored points just twice and never made it into the top ten in qualifying – unlike new team mate Pastor Maldonado.

Bruno Senna took his place at the team for 2012.

After losing his seat in F1 Barrichello moved to IndyCar with the KV Racing team in 2012.