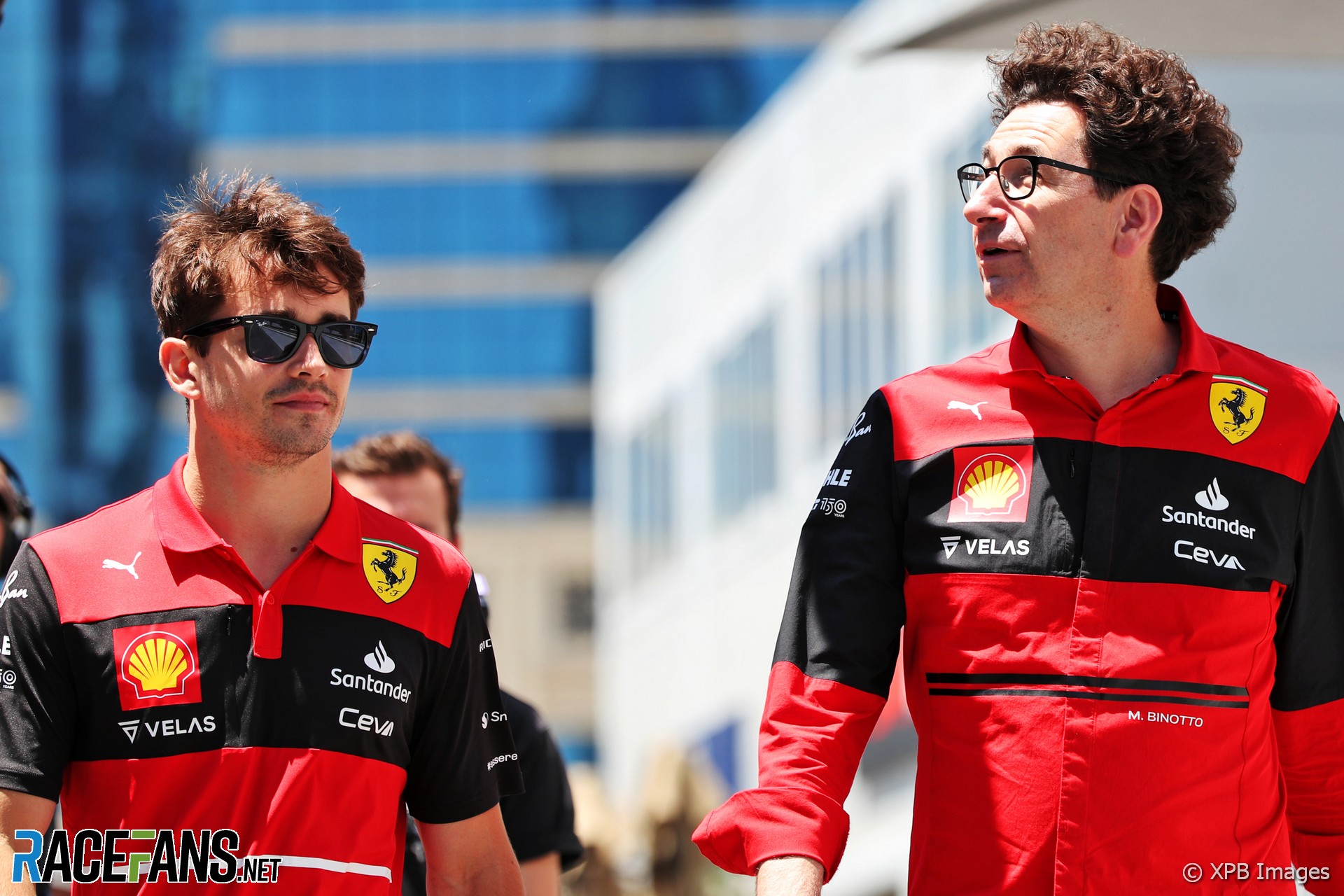 In the round-up: Charles Leclerc publicly thanked Ferrari team principal Mattia Binotto following the announcement he will step down from the team.

Leclerc thanked Binotto in a post on social media yesterday after Ferrari announced the team principal had offered his resignation.

“Thanks for everything, Mattia,” said Leclerc, who joined Ferrari in 2019, Binotto’s first year in charge of the team.

“We spent four very intense years together, of great satisfaction and also, inevitably, of moments that put us to the test,” he continued.

“My esteem and respect for you have never failed, and we have always worked with all the dedication to achieve the same goals. Good luck for everything.”

Ocon says “it’s good” Alonso is moving on from Alpine

Alpine’s Esteban Ocon says he shouldered much more of the workload than his departing team mate this year.

In a recent interview with regional news outlet Ouest France, Esteban Ocon talked about his relationship with team mate Fernando Alonso and their contributions to the team.

The pair spent two seasons together at Alpine but Alonso is moving to Aston Martin for 2023. Alonso outscored his team mate last year, although Ocon picked up the team’s first win and became their higher-scoring driver this season.

Alonso’s time at the team ended with several tricky race weekends. He tangled with Ocon at the Brazilian Grand Prix following which Alonso said he was looking forward to leaving the team.

“Of course, I was disappointed by his comments in the press and not internally,” Ocon said to Ouest France. “We didn’t have any discussions about any of that. I will keep the respect I have for him.

“It’s good that he’s going to Aston Martin and that we’re going our separate ways. Honestly, the work was 98% on my back and 2% on his. I was overworked. I did all the development on the simulator, the marketing trips.”

The Formula 1-supporting Formula 2 and Formula 3 championships will get their 2023 track action underway on 14th-16th February next year with three days of pre-season testing at the Bahrain International Circuit.

he track will be the venue of the opening round of both series just over two weeks later, and will mark the first official appearance in both series of the new PHM Racing by Charouz squad, formed by German Formula 4 team PHM Racing buying out the entry and assets of current F2 and F3 squad Charouz Racing System.

Pabst Racing has retained Jordan Missig and DEForce Racing have promoted Bijoy Garg full-time to USF Pro 2000 for the 2023 season.

USFP2000, previously known as Indy Pro 2000, sits below Indy Lights on the IndyCar support bill and provides a scholarship to its champion that guarantees them promotion to the next level.

Missig came 11th in USFP2000 this year with a best finish of sixth, having arrived in the series as a Formula Regional Americas race-winner, while Garg contested the final two rounds of this season having stepped up from USF2000 where he had stood on the podium twice in 2022.

Do the math: Many statistics show 2022 IndyCar season was special (IndyCar)

'If it seemed the 2022 IndyCar season was one of the most competitive seasons ever, statistics bear that out. From the total number of passes to five venues posting passing records to the amount of track activity across all on-track sessions, this season was certainly one to remember.'

'IndyCar has a new rear attenuator in the works that will be implemented heading into 2023. Together, IndyCar and its chassis supplier Dallara have developed a redesigned unit that has been commissioned to improve crushability and further reduce the forces transmitted into the cockpit in rearward impacts.'

'A throttle-based P2P system made its debut at last month’s Boost Mobile Gold Coast 500. Then, drivers were allowed a discrete number of activations per race whereas, for Adelaide, they will be limited only by a 90-second time allocation in each encounter, somewhat similar to how IndyCar uses the system.'

'The Supercorso put the icing on the cake for the 40th anniversary of the ACI Sport Federal School. After four intense days of tests and evaluations, inside and outside the cockpit, the iconic event for the Youth Project of the Automobile Club of Italy concluded at Vallelunga, comparing six young drivers from karting to offer them a great training opportunity and indicate one of them as a new promise in the four-wheeled sport.'

'Mercedes junior Andrea Kimi Antonelli has undergone surgery on his injured wrist as he aims to get back to testing before his planned Formula Regional debut next January.'

In our team’s shoes: Alfa Romeo F1 Team and Accelleron launch auction items for Save the Children (Sauber)

'Alfa Romeo F1 Team is teaming up with Accelleron to give fans an opportunity to be in Valtteri Bottas’s and Zhou Guanyu’s shoes – literally – and raise funds in support of Save the Children, the world’s leading children’s rights organisation and the team’s official charity partner.'

Earlier this year I visited the Wat Sakraeo Orphanage. We designed a helmet for the Singapore Grand Prix & auctioned it off to raise funds for essential work that needed to be done. Due to the helmet & many other donations through the year, we’ve managed to raise almost £100,000. pic.twitter.com/ppmi9NNlx8

The Next Gen Racer scholarship is a unique and accessible annual opportunity for talented racing drivers to secure a fully-funded seat for the ERA Championship Series Europe. We are pleased to announce the seven shortlisted candidates for the 2022-23 scholarship. 1/3 pic.twitter.com/K2whyz3e0u

See how some of our drivers describe themselves in one word (or more).#INDYNXT // @FirestoneRacing pic.twitter.com/oYMvQLrkjS

"I have never and will never keep my 'transness' secret, so everyone knew, but I was surprised to see there was absolutely no judgement, publicly at least." 🏳️‍⚧️

This month's Spotlight Article is with Alice Maclachlan, a trans kart racer.. with some exciting news to share! 👀 pic.twitter.com/KA1VbVD9KF

Mattia Binotto’s resignation from his position as Ferrari’s team principal was confirmed on Tuesday after weeks of speculation, and the arrival of the news actually led to more speculation on the reasons behind his departure and whether it was a personal decision or one pushed by Ferrari following a year of underperformance.

Binotto was both a victim and an enabler of the toxic blame culture at Ferrari.

He was often quite willing to throw his team under the bus when things didn’t go right. It was a learned behaviour from decades of being a company man. That meant that no-one in the team was willing to make bold calls. They knew if they were wrong, they would be blamed. How many times did we hear the engineers asking the driver’s opinions on strategy?

Eventually, the number of indecisive moments piles up so that the only common denominator is the team principal.

The Scuderia works best when outsiders run the show. People that don’t care what the Italian media says. People that will have their team member’s backs and empower them.
DavidS

Don’t miss anything from RaceFans – get a daily digest of our coverage in your inbox. Sign up for the free RaceFans email Newsletter here: