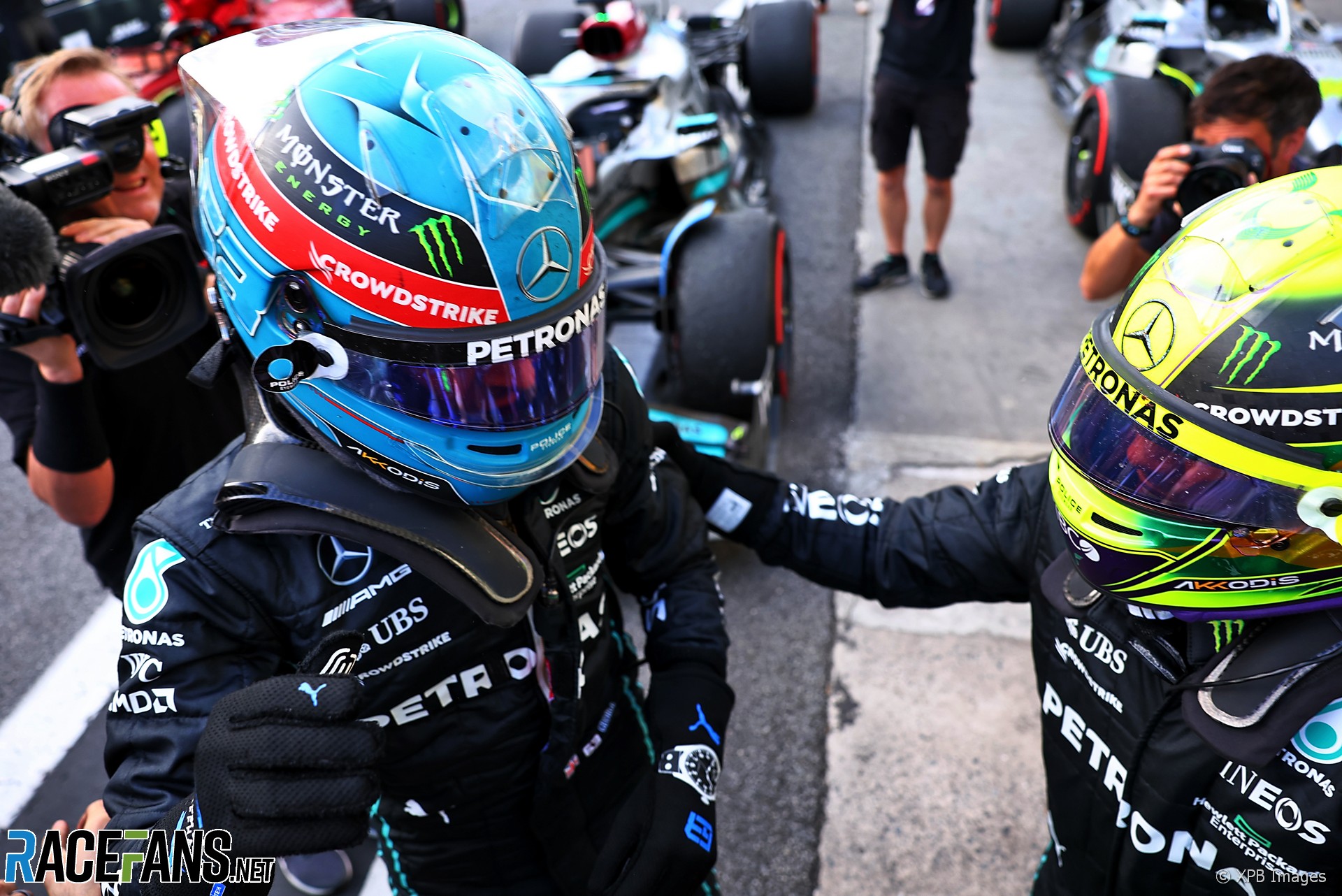 Brazilian Grand Prix sprint race winner George Russell admits he was surprised by his pace after he caught and passed Max Verstappen to secure pole position.

Russell overtook Verstappen to win the sprint race after an intense multi-lap duel with the Red Bull driver. He used soft tyres to catch Verstappen, who started the race on the medium tyre compound, after the pair passed Kevin Magnussen in the early laps.

The Mercedes driver eventually took the lead on his third attempt at overtaking the world champion into Descida do Lago, which he admitted he hadn’t expected would happen.

“I think we were confident that we could finish second and we thought Max would probably have quite an easy run, to be honest,” he said. “We knew that if we weren’t ahead of him at turn one it was going to be very difficult to just stay ahead of him. I started attacking in the early laps and I thought once he gets some temperature in his tyres, he’ll be away.”

It was Russell’s first sprint race victory of his career and Mercedes’ first sprint race win of the season. Russell said the result reflected the effort Mercedes had put in to bring themselves into contention at the front after a challenging season.

“It was incredible,” Russell said. “I wasn’t expecting to have that much pace, but I think it goes to show all the hard work everybody’s putting in and the progress we as a team have made in these last three races since Austin.

“The car’s been feeling really great. Obviously it’s difficult to know how Max would’ve got on had he been on the soft tyres, but nevertheless, standing here is a great feeling.”

Russell had to fight hard to get ahead of Verstappen, who fended off his attacks for multiple laps before the Mercedes driver used DRS to pass him on the run to turn four.

“I think it’s a little bit difficult, because obviously this is a sprint race and you’ve got to manage that risk-reward.” Russell said. “So even though I was dying to get that victory, I didn’t want to risk it too much and end up with no points and start at the back. But we made it stick third time lucky.”

Russell won the sprint race by four seconds from Carlos Sainz Jnr and team mate Lewis Hamilton in third. However, Sainz will serve a five second power unit grid penalty ahead of tomorrow’s grand prix, meaning it will be an all-Mercedes front row for the grand prix.

“It’s crazy to think we’re both starting on the front row,” he said. “Lewis did a great job coming from P8. So it’s going to be exciting.

“I’m sure Max is going to be flying tomorrow, coming through the pack, but we’re in a luxury position that we can maybe split the strategy and go for a win.”