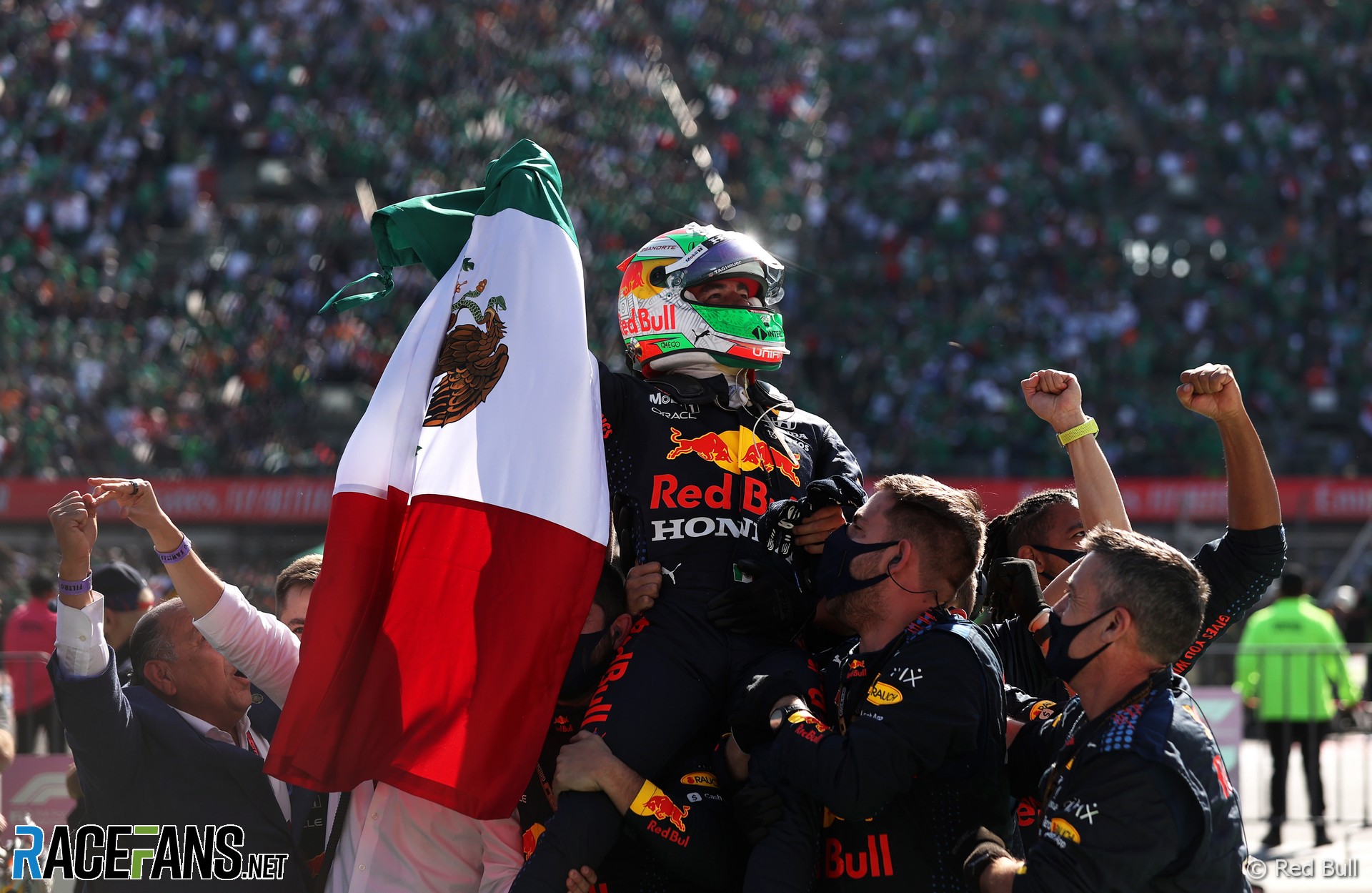 The Autodromo Hermanos Rodriguez hosts the Mexican Grand Prix for the 22nd time this weekend.

But after Mexico’s own Sergio Perez claimed the first home podium here last year, can the local fans dream of a victory this season?

Here are the talking points for the Mexican Grand Prix.

A possible home win for Perez?

Six drivers in the history of Formula 1 have taken a start in a grand prix with the flag of Mexico emblazoned on their cars. Earlier this season, Red Bull driver Perez surpassed Pedro Rodriguez as the most successful grand prix driver of all time by winning the Monaco Grand Prix, his third career win.

While team mate Max Verstappen has romped to a second consecutive world championship title, Perez is locked in a battle with Charles Leclerc to secure second place in the drivers’ championship over the final three rounds of the season.

Despite Verstappen’s dominance this season, Perez heads to Mexico City knowing that he has the best opportunity any Mexican driver has ever had to win their home grand prix. While Verstappen has stated he has no intentions of moving over to allow his team mate to win in Mexico should the pair find themselves leading this weekend’s race – and why should he – there is one factor besides the enormous support he can expect which may give Perez a useful home advantage.

Last weekend, Perez took his fifth new engine of the 2022 season and served a five-place grid penalty after qualifying. Verstappen is already using his fifth power unit of the championship, having taken it before the Belgian Grand Prix at Spa where he won from 14th on the grid. With the risk that Verstappen may not be able to get to the end of the year with another power unit and the Mexican circuit having by far the longest straight and highest top speeds of the season, Red Bull may choose to give the champion a fresh power unit for the final three rounds.

If they do, that could give Perez a major head start and leave him with the responsibility of fighting with the Ferraris. At least, until Verstappen recovers through the field, as he has done so many times already this season…

An all-time record for Verstappen?

After the 2022 season began so competitively, it’s remarkable how Verstappen and Red Bull appeared to turn the championship around and deliver win after win over the final three quarters of the year. With both championships now safely secured, there are still three rounds left for the pair to further extend their dominance over their rivals.

With his 13th victory last weekend in the USA, Verstappen drew equal with Mick Schumacher and Sebastian Vettel on top of the list for most victories achieved in a single season. With three races still remaining, it feels that the matter of Verstappen breaking the record is not a case of ‘if’ but ‘when’.

Having overcome grid penalties, spins and poor pit stops to win grands prix this year, it would be hard to see why Verstappen could not set a new all-time benchmark for wins in a season in Mexico.

Will Alonso get his points back?

Alpine’s effort to overturn the FIA’s decision to give Fernando Alonso the penalty which cost him seventh place in last Sunday’s United States Grand Prix will be debated by the stewards tomorrow. This initial hearing is only to decide whether their protest is admissible – if the stewards decide not, matters will go no further.

On the face of it, Alpine’s chances don’t look good. They intend to challenge whether the stewards were correcting in accepting the original protest by Haas which led to Alonso’s penalty. Alpine pointed out that it was not submitted on time, but the International Sporting Code makes allowances for situations where teams are not able to submit protests within the time limit, and the stewards cited this clause when they penalised Alonso.

In a social media post on Monday the two-times world champion said “this decision will dictate if we are going in the right direction for the future”. However it’s entirely possible the protest will be dismissed on procedural grounds and the thorny issue of whether Alonso should be retroactively punished because his team did not call him into the pits to remove a loose mirror will not be addressed.

Mexico City is one of the highest major cities on the planet by attitude. Sitting 2,200 metres above sea level, the slightly thinner air at this level has a significant impact on the performance of cars.

In practical terms, the thinner air translates to reduced drag. This is particularly noticeable at the very top of the speed range. Although the kilometre-long front straight is not as long as Baku’s and downforce levels not quite as low as Monza, Mexico does produce the highest speeds seen all season.

Last year, pole winner Valtteri Bottas and Mercedes team mate Lewis Hamilton almost breached 350km/h at the end of the main straight in Q3 – the fastest non-slipstream assisted speed of the entire season. Mercedes are hoping the altitude could work in favour of their W13 this weekend, says team principal Toto Wolff, as they continue to look for that elusive win and halt Red Bull’s run of eight consecutive victories.

“I need to bite my tongue because sometimes this year, I’ve said we should be looking good at a particular track and then we didn’t – and the other way around,” admitted Wolff. “So on paper, Mexico looks good. Our draggy car should be effective in the thin air. And it’s good that it’s coming next week already. So I hope we can give them a run for their money.”

Gasly edges towards a suspension

Pierre Gasly and the FIA race stewards are not seeing eye-to-eye lately. A series of incidents at the Japanese and United States grands prix have led to Gasly’s penalty points haul mount up rapidly.

Back at Suzuka, a frightening incident involving a crane released on track in heavily wet conditions left Gasly and many of his peers furious. But despite an FIA report into the incident determining that there had been “procedural issues” on behalf of race control, Gasly was also the subject of criticism for his “reckless” driving under Safety Car and red flag conditions, highlighted by how the Japanese Grand Prix stewards penalised him with two penalty points on his superlicence.

That left him on a total of nine – three away from the 12 that would result in an instant one race suspension. However, Gasly had two further points wiped from his record before the US grand prix, as the two he received from a collision with Alonso at the start of last year’s Turkish Grand Prix expired on October 10th. That was, until Gasly earned the attention of the stewards once again in Austin when he fell more than 10 car lengths behind Lando Norris during a Safety Car period, earning another two points on his superlicence.

That put Gasly right back to nine once more. All nine of these were acquired this season, the first of which was handed out at the Spanish Grand Prix in May. That means that Gasly effectively has only a three-point limit for the next ten races, stretching until the end of next year’s Emilia-Romagna Grand Prix. With 16 of this season’s 20 drivers carrying at least one penalty point on their superlicence and 11 of those on at least three points, it will certainly be a challenge for Gasly to stay squeaky clean over the next 10 race weekends and avoid the ignominy of being the first ever Formula 1 driver to earn a race ban for reaching the maximum penalty point threshold.

The United States will have only its third full-time F1 driver in 30 years next year when Williams promote junior driver Logan Sargeant from Formula 2 up to their second race seat alongside Alexander Albon for the 2023 season. While the move is dependent on him securing the final points needed to earn a superlicence in the final F2 round in Abu Dhabi, it is almost certain that Sargeant will reach the magic number he requires.

Sargeant was one of five drivers to get a run in last Friday’s first practice session for the US GP, alongside fellow rookies Alex Palou, Theo Pourchaire, Robert Shwartzman and experienced driver Antonio Giovinazzi. Sargeant was taking part in a grand prix session for the first time, getting a taste of the new ground effect era of cars that he will likely be driving for next season.

This Friday, he will step back into the FW44 for the second consecutive weekend. If Sargeant completes 24 laps, he will cover the 100km necessary to earn a second bonus superlicence point to add to the first he earned at the Circuit of the Americas.

As with last weekend, Friday’s second practice session will also take a different format. In the USA, the second of the day’s two sessions was extended to 90 minutes with teams running prototype 2023 tyres to test for the series’ supplier Pirelli.

After testing the harder compounds made available, teams will again have an extended session on Friday this weekend in Mexico where they will test the softer compounds. Having taken almost 10 race distances’ worth of data last Friday, Pirelli will be hopeful of gathering a similar level of feedback in Mexico as they continue to develop next year’s range of tyres.

Are you going to the Mexican Grand Prix?

If you’re heading to Mexico for this weekend’s race, we want to hear from you:

Who do you think will be the team to beat in the Mexican Grand Prix? Have your say below.