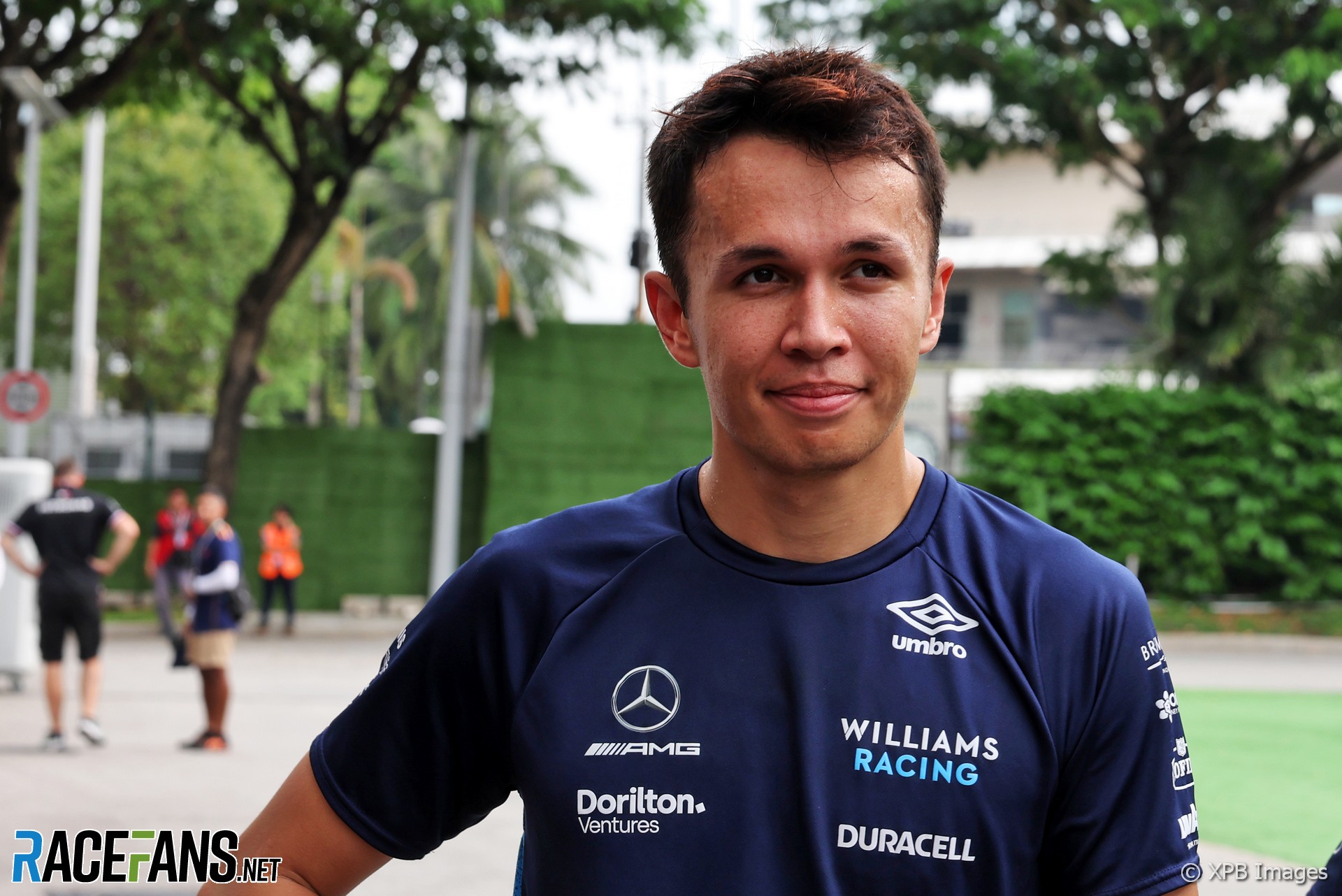 Alexander Albon admitted he wasn’t certain he would be able to return to action this weekend after experiencing complications arising from surgery two weeks ago.

The Williams driver was forced to miss the Italian Grand Prix after developing appendicitis. He underwent surgery on Saturday but suffered respiratory failure and had to be taken to intensive care.

Being sedated had a physical impact on Albon, in addition to the surgery itself, and created extra uncertainty over when he could return to racing.

“It was more kind of bed recovery to begin with,” Albon explained during the FIA press conference in Singapore today.

“It’s quite a tricky one because you’re basically waiting for your lungs to recover. And at the same time, your body can’t move as well as it normally can. So you can’t just jump back into normal training, you have to slowly build into it. So it was kind of starting Monday last week when we really started to push it and see what we can do.

“I treated it like a nine-to-five job, training and recovery. Of course, recovery is really important, basically throwing everything [at it], and day by day I was getting better and better.”

Despite his rate of improvement, Albon was unsure whether he would be able to race in Singapore. It is widely regarded as the toughest race on the calendar due to the bumpy, punishing track and combination of high ambient temperatures and humidity.

“I got to a point where the recovery was going really well and I don’t think we truthfully had in mind Singapore on the cards,” he admitted. “But just with the speed of the recovery, it was definitely a possible thing.

“We sat long and hard to think about it, shall we do it or not, and I feel like I am ready. Of course we have to wait until FP1 tomorrow to see where it’s at because driving around here is a bit of a different beast.”

The operation Albon had on his appendix is usually straightforward, he said. “It’s a relatively simple procedure. I think it only takes a couple of hours to be operated on. But obviously you don’t understand time when you’re sedated.”

It was only when he came around that he discovered the operation had proved more complicated than expected. “When I did wake up, I thought that was the procedure finished. It was only they said, ‘well, you actually have gone through a little bit more than that’.”

However the consequences of his respiratory problem proved less severe than was initially feared. “I was supposed to be in an induced sedation for two or three days, but in the end my lungs cleared out within 12 hours, so I was already up pretty much shortly after.”

Albon says he won’t know until practice whether he will be fit enough to do Sunday’s two-hour race.

“Mainly we’re looking at long runs [in practice]. The short runs, [for] anyone, it’s quite a comfortable thing to be able to drive these cars. But by FP2 especially you do get a really good idea of how it’s going to feel on your body for the race.

“I’m not planning to not race, I’m planning to be there, and truthfully I feel pretty confident in my body, but of course nothing quite compares it to the actual toll of driving these cars.”

Despite being forced to miss a race, Albon said the disruption to his season was not as bad as it could have been. “In terms of setbacks, it’s a small one really,” he reflected.

“I’ve missed out on a race. I’ve been very lucky I’ve had very good doctors around me who were in Italy to get me back into a good place. So I feel very fortunate.”