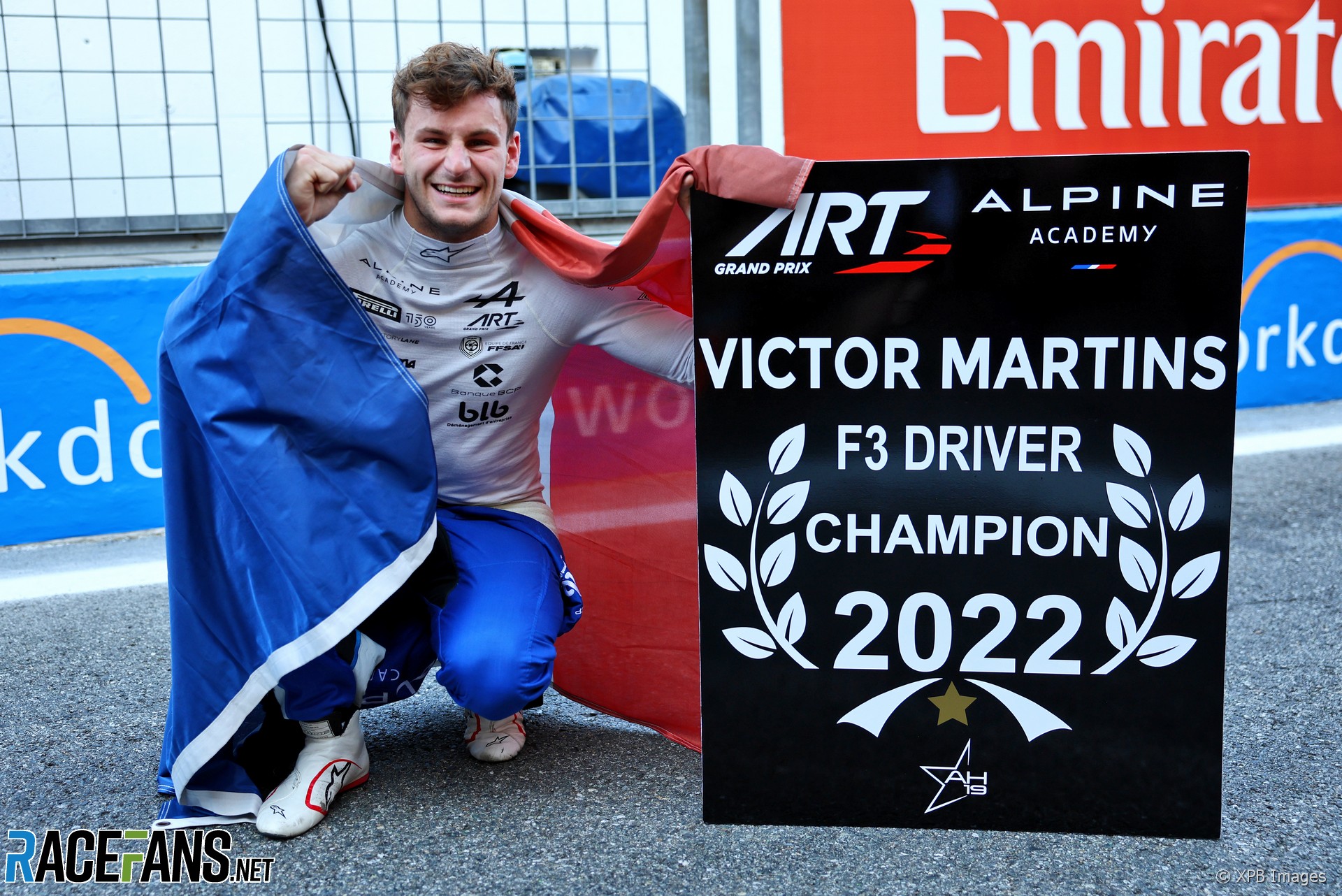 Victor Martins narrowly emerged the FIA Formula 3 champion under a red flag as the final race of the season did not reach full distance.

Martins held a slim six point lead coming into the final race. He had a total of 127 points to Isack Hadjar’s 121, with Oliver Bearman’s enormous charge up the grid in yesterday’s sprint race putting him on 114, only 13 points off Martins. Mathematically still in contention remained Zane Maloney and Roman Stanek, both on 109 and Arthur Leclerc with 101 points.

Alexander Smolyar had taken pole, Maloney alongside him on the front row and Stanek and Martins on the second. Leclerc started fifth, while a crash during qualifying had put Hadjar well back in 16th.

Maloney snatched the lead on the first lap, relegating Smolyar to second with Martins behind him. Meanwhile Bearman and Leclerc went two-wide, nearly colliding. Eventually Leclerc relented, tucking in behind Bearman after the Roggia chicane.

David Vidales, enduring a miserable final weekend of the year, made lap one contact with Rafael Villagomez, both of their races ending in the gravel on the entry to the first Lesmo, prompting a Safety Car to be immediately called.

The race restarted on lap four, Maloney taking a very early restart and almost managing to break the tow to Smolyar. However, Smolyar out-braked Maloney into turn one, barely holding onto it through the first chicane and allowing Martins through past first Maloney and then into the lead.

On lap seven, Martins was shown a black-and-white flag as a final warning for weaving on the straight.

Maloney managed to take the lead via a DRS pass just befor a turn one cluster that narrowly avoided seeing any cars retire on lap nine. Stanek and Leclerc ended up having to weave around the runoff after squeezing Smolyar, who began dropping down the order with what he reported as broken suspension. Bearman moved up to third and Martins made the wise choice to avoid taking damage, losing the race lead but keeping the championship advantage.

Martins did not resist a move from Bearman too hard, on lap 12. Although holding on to third meant he was safe from Bearman, he had to finish fourth in order to win the title if Bearman moved into the win.

Bearman attempted a pass for the lead on lap 16 but Maloney defended, with Bearman being forced to take the shortcut through the chicane and stay behind. Shortly after, a Safety Car was called after Kush Maini and Brad Benavides crashed out of the second Lesmo, both cars ending up on the grass and in the wall on the inside.

There was a red flag called with five laps to go, in order to clear Maini and Benavides’ cars. During the red flag, Martins was issued a five-second time penalty for four track limits violations, putting his championship seemingly under threat for the final four laps.

However, shortly afterwards, the race director announced that the race would not be resumed. Confusion reigned in the pit lane as neither Martins, his team or the other drivers were aware how the championship would be decided.

Eventually, Jonny Edgar and William Alatalo also received five-second time penalties for track limit violations. Alatalo had been initially promoted to third by Martins’ penalty, his own penalty subsequently putting Jak Crawford on the podium and Martins back to fourth.