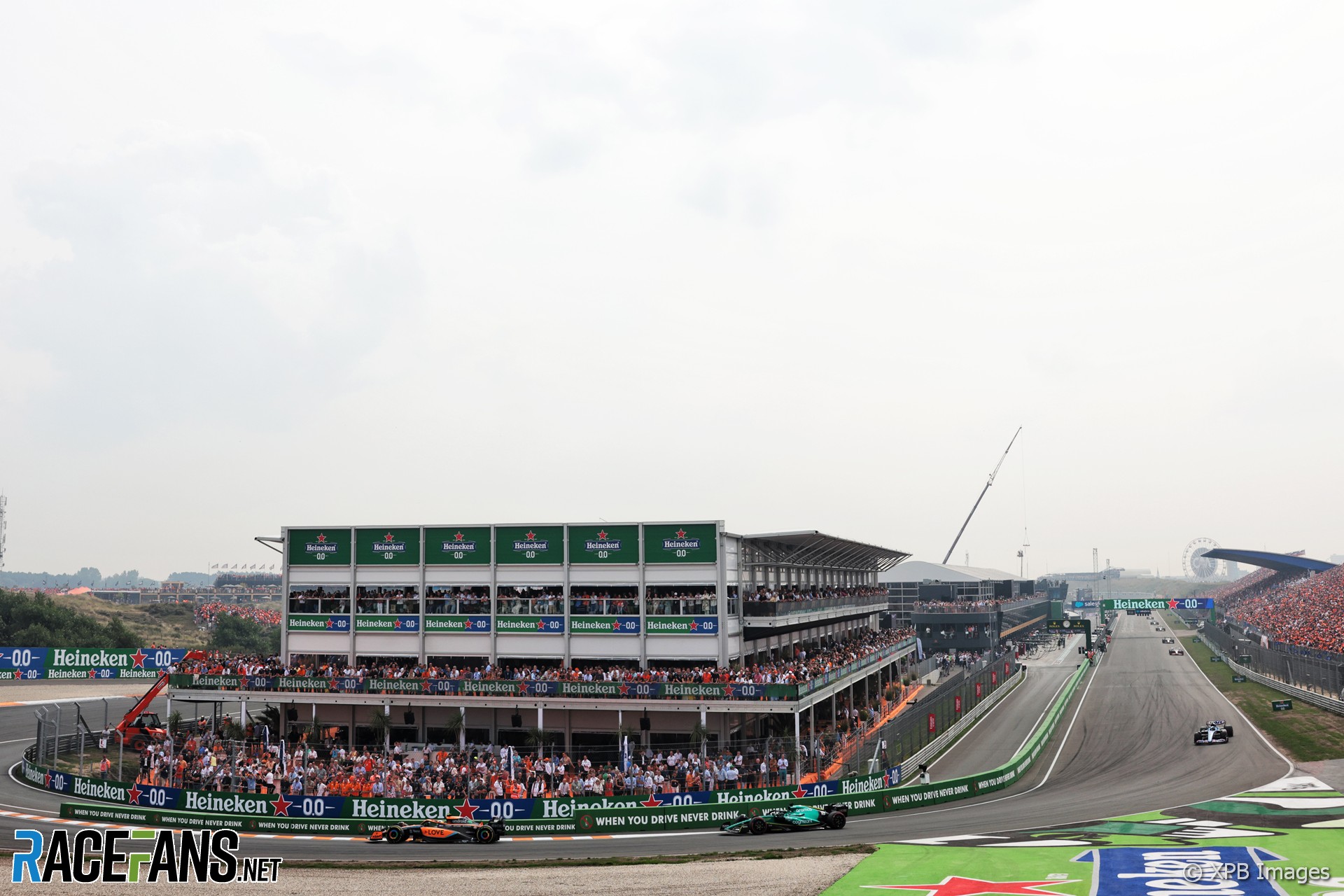 In the round-up: Lando Norris says the first turn at Zandvoort needs to be changed to increase the chance of overtaking

Norris calls for Zandvoort to revise turn one

Norris started and finished seven in last weekend’s Dutch Grand Prix. Despite the extension to the DRS zone approaching the opening corner, Tarzan, he said “Safety Cars, the VSCs and tyre strategies and people boxing and not boxing” were all that led to changes of position.

In order to improve the racing at the track, Norris said “they need to change turn one, it’s quite simple.”

“They need to make turn one a much bigger braking zone, a much tighter corner, and that will provide more opportunities and a longer DRS zone,” Norris explained.

“Turn one is just too short a braking zone. It’s too quick and therefore you just can’t brake past someone or anything. It’s so easy just to defend into one and then come back, close the door and stay ahead. So for me, they need to change turn one.”

Andre Lotterer will partner Jake Dennis at Andretti Autosport in Formula E next season. He has raced for Porsche in the series since 2019 and will continue to represent the brand in sportscars where he will assist in development of its new hypercar.

However the team have replaced him with Antonio Felix da Costa in FE. Lotterer’s Andretti move ties in with the team switching from BMW to Porsche powertrains for 2023.

“I’m excited to be joining Andretti for season nine and the start of the Gen3 era,” said Lotterer. “Working together with Jake will be a great combination to continue to push the team to the front of the field in FE.”

Da Costa was also Lotterer’s replacement when he left DS Techeetah for Porsche three years ago.

Red Bull’s leading junior driver in Formula 2, Liam Lawson, says the team’s pursuit of IndyCar star Colton Herta for a seat at AlphaTauri in the 2023 F1 season “doesn’t change a lot” for him.

F2 sophomore Lawson has had an increased role within Red Bull this year, becoming the team’s reserve driver in addition to AlphaTauri’s, and making his F1 free practice debut with the latter at the Belgian Grand Prix.

Lawson is currently fifth in the F2 standings with three sprint race wins, and came ninth in the series last year after winning his debut race. There are three other Red Bull juniors in F2 who, like Lawson, are aiming to race for AlphaTauri if Pierre Gasly leaves for Alpine.

“At the moment it’s just discussions and from my side it doesn’t change a lot for me,” Lawson said of the Herta rumours. “I’m still focused on delivering the best job in F2 that I can and trying to finish this year strongly.

“It hasn’t been the sort of season we had hoped for. But I guess talk in F1 at the moment is all discussion at the moment, and from from my side I’ll wait to find out what is sort of decided for me, but right now it’s just focusing on F2.”

'Home races don't get much better than that for MP Motorsport. In the sprint race, Clement Novalak claimed his first podium, whilst on Sunday, Felipe Drugovich put one hand on the title with his fifth win of 2022. As the Dutch team reigned triumphant and returned to the top of the teams' championship, we handed guest column duties over to team principal Sander Dorsman.'

Newgarden to ‘go for broke’ in IndyCar finale (Speedcafe)

'Josef Newgarden says he is set to “go for broke” in a bid to win the IndyCar Series at this weekend’s Laguna Seca finale. The Team Penske driver slipped to 20 points back from Will Power after starting the Portland weekend only three in arrears.'

Ferrari’s championship challenge is over, but at this rate they’ll get overtaken by Mercedes too (The Times)

'Another weekend, another set of Ferrari blunders that have become all too common this year. The season had started with them as genuine title contenders — the fastest car, a super-quick driver in Charles Leclerc and early wins to set themselves up as the ones to beat.'

'There’s been plenty of times that I’ve been critical of Red Bull’s approach to drivers, and there have been multiple occasions where Marko has been a little too quick to open his mouth before thinking about how what he’s saying could be taken – most recently with some comments about Sergio Perez’s heritage that he quickly learned were not acceptable. But one thing that is refreshing about the Red Bull advisor is that if you ask him a question, he’ll give you a straight answer.'

'Benjamin Pedersen finished the job Sunday in the Indy Lights Grand Prix of Portland with victory, while Linus Lundqvist still has a bit of work to do to reach his ultimate goal: the title.'

'Following the conclusion of season eight, Venturi Grand Prix announces its transition to the Monaco Sports Group with immediate effect. This name change heralds the start of an exciting new era for FE and precedes the team’s title and powertrain partnership with Maserati.'

'Fernando Barrichello, son of Rubens, then lost momentum and that allowed Felipe Barrichello Bartz to pass him back. The three, led by Nicolas Giaffone, finished in the same order as they started, making it a family celebration at the podium.'

STATEMENT : An update on the condition of Colin White and Mike Brown following the serious incident in the Millers Oils Ginetta GT4 SuperCup at Thruxton on Sunday 28th August.

Ginetta wish Colin and Mike all the best on their roads to recovery. pic.twitter.com/5PcOMTvaWa

The FIA’s Formula 3 championship has organised a private test at Magny-Cours for four female racers, as the latest initiative to try to get a woman onto the series’ grid.

Encouraging to see all the efforts being made to encourage more women into all aspects of motorsports. You definitely notice more women in the garages in F1 these days. One day, when they are on a level playing field, these efforts will no longer be necessary. But until that day comes, I applaud what’s being done.

The idea that a woman can’t physically compete with a man in a racing car is utter rubbish. Some of the male racers around the world are tiny. It’s all about determination.
Shimks

Happy birthday to Stephen and F1Sauber!