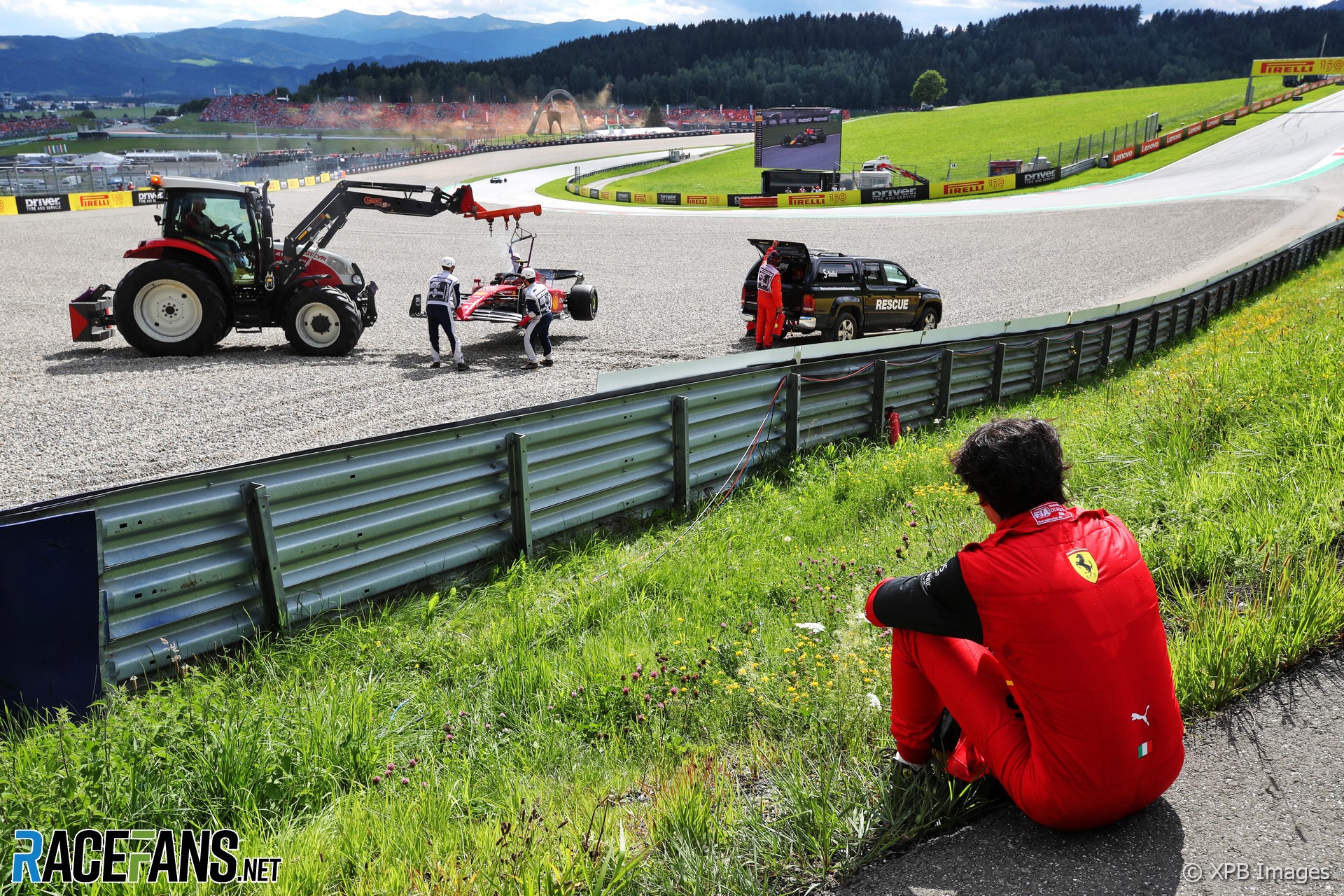 In the round-up: Red Bull team principal Christian Horner says Ferrari’s reliability concerns are of no comfort to his team as they compete for this year’s world championship titles.

Carlos Sainz Jnr suffered the latest in a series of reliability failures for Ferrari in last week’s Austrian Grand Prix.

But asked if Ferrari’s recent reliability concerns gave Red Bull cause for optimism in their championship, Horner said “not really.”

“We’re not too focussed on them and that,” Horner continued. “We can’t control or contribute to that in any way. I think that we’ve got to focus on ourselves and on just getting the best out of our own package.

Horner says Red Bull are conscious that Ferrari could have secured a one-two victory last weekend in Austria had Sainz not suffered a power unit failure. “They had a very strong car – they could have could have well finished first and second. Up until about lap 12, the weekend had gone pretty well in terms of the pole position and the sprint victory. But, unfortunately, that tyre deg just hit us pretty hard.”

New York crash ‘one of my strongest’ – Di Grassi

Lucas di Grassi labelled the race ending crash he was involved in at the end of the first New York EPrix as one of the biggest he had experienced in his motorsport career.

Di Grassi was running in second behind Nick Cassidy when rain began to fall with around ten minutes remaining in the race. Sudden high levels of standing water along the back straight caused Cassidy, Di Grassi and Stoffel Vandoorne to aquaplane off the track and into the turn six barriers, with Di Grassi’s Venturi hitting Cassidy’s Envision before both were struck by the Mercedes.

“It was well over 15G, I would say. I’m fully bruised – my neck, my hands, my legs – but I’m okay. It just shows that when you’re aquaplaning, there’s nothing really you can do. I’m happy that they put [out] the red flag and they reversed the result of the race, because it was the fairest thing to do. I’m happy with the points, but unhappy that the car is completely in pieces and the mechanics will have to work very, very hard to put the car together for tomorrow.”

Graham Rahal says salaries for IndyCar drivers are “definitely getting better” after recent seasons where some drivers would not be paid more than expenses for competing in the series.

Controversy erupted over Alex Palou’s future this week with both Ganassi and McLaren claiming to have rights to his services for 2023. Rahal says that the driver market in IndyCar is becoming more financially competitive.

“I also think five, six, seven, eight years ago it was way too low. There were a bunch of guys in the series that weren’t even getting paid – basically their expenses to live and that’s it. I think that it was just kind of out of line.

“I think still as a series generally clearly we don’t play as many games as baseball or whatever. When you see some of the salaries that are announced in those major sports, you could literally fund multiple race cars for years off what some of these guys are making.”

Last week fifty girls had the trip of a lifetime!🙌

As part of our aim to create a positive impact within our community and to improve diversity, equity, and inclusion within motorsport, we were delighted to welcome fifty girls to the factory for a @GirlsOnTrackUK activity day! pic.twitter.com/DfWZha9TXV

Home GP prep 💪 Have a good weekend everybody 😎 pic.twitter.com/8kUm8rAlTW

Sorry, Fernando! Alonso is wrong after his moans about F1's predictability (Mail)

"Zooming out to see the bigger picture, this is not just a two-horse race. This is the best of the best jostling and tussling around every corner and straight to triumph. This is a long slog of a season, where one mistake can lead to heartbreak. Yes, the end result may be predictable - but the journey getting there really is not."

"A judge in Sao Paulo has ordered an investigation into his comments after a human rights group pressed charges against the former racer for causing moral damage to black and LGBTQ+ people. The charges include a claim for Piquet to pay around £1.5m in damages."

"The level is so high in Formula E that if you don’t perform at your 100% best, the team and myself, you don’t come away with any points at all. You have to absolutely nail it to finish top 10 in this championship. Wherever you finish in the race this year, that’s probably where you deserve to finish."

"We're back with some new content that answers your questions, such as: do Romain Grosjean and Lewis Hamilton get along? Based on Google search queries, I have compiled a list of questions frequently asked about myself, Romain Grosjean."

It took a long time for Mick to get going in F1, he has had around 30 races before hitting the mark, a lot longer than many other drivers ever got. But going by his F3 and F2 form, once he hits the mark he stays at that level, so he might actually be a very capable F1 driver now. Magnussen has done great this year.
Kpcart