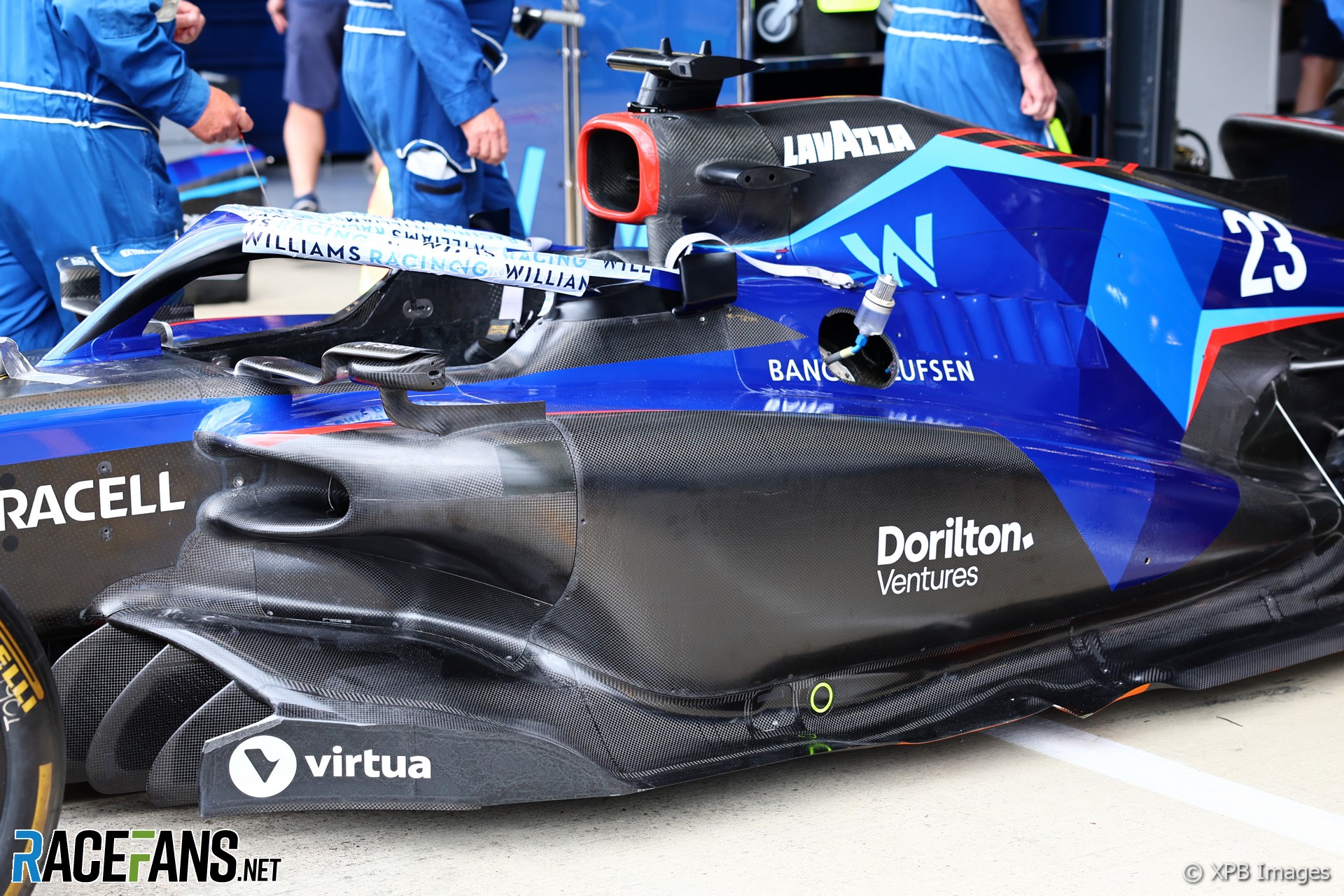 Alexander Albon has high hopes for the improvement Williams will make from its first major upgrade of the season, but admits it may take a while to get the most out of.

The team has brought an upgrade package for Albon’s car only to this weekend’s British Grand Prix. He said the new car is closer to Red Bull’s in design.

“As you’ve seen, everyone’s been going towards a certain concept,” said Albon. “Everyone started a bit different and it’s either the kind of the Ferrari concept or the Red Bull concept that seems to be adopted and our one looks more like the Red Bull car. But I wouldn’t call it a like-for-like.”

Williams are languishing at the bottom of the standings after the first nine races. Albon said “a lot of work” has gone into the upgrade. “This is a big update. There isn’t many things on the car have the same part as two weeks ago. So it’s pretty big.”

However he dismissed rumours the team expects to gain as much as a second per lap from the revised aerodynamics.

“It’s hard to say what we’ll do,” he said. “I think a second is very… if we took that, we would be very, very happy. But until we drive the car we won’t really know.”

He said it may take more than one race for the team to unlock the performance from their revised car.

“I think what you’ll see especially on Friday is us trying to figure out how to deal with the car and see what what we can do in terms of ride height windows and balance tuning, whatever it may be. Because we might end up on Friday with a very different car and it will take a bit of time to get used to.

“Maybe not even this weekend, it might take a bit more than that. So there’s no numbers on it, I think it would be silly to do that, but we obviously are hoping for a very good improvement.”

The team wasn’t able to build enough parts in order for Nicholas Latifi to also run the upgrade, said Albon.

“Obviously Silverstone’s close and the guys have worked really hard,” he said. “The car was ready very late and that’s a testament to everyone working hard at the factory.

“It’s a much-needed upgrade, of course. Whether it works as amazing as it could or whatever it may be, it’s been a real team effort to get it here.

“There’s still things coming in not just for this race, but even to Austria and beyond that I think we’ll hopefully have a bit more of a better base package that we can start still developing some improvement.”

He admitted he will have to take it easy at first due to the team’s limited stock of parts. “As you can see with one car, it’s going to be tricky in a way,” he said. “I’m not going to be pushing flat out in turn nine [Copse] on the first lap that’s for sure. We’ll make sure to be steady on it.”

Albon hopes the upgrade will move them closer towards the rest of the midfield after rivals such as Aston Martin moved ahead of them in recent races.

“In terms of positioning, obviously we want to be fighting more into Q2, more into the midfield, more into the points,” he said. “A very good weekend for us right now, when we put it all together, is at the very bottom of the points-slash-P11, P12.

“So realistically speaking, on paper, we are not quick enough, we know that, and there is a little bit of a gap even to the ninth-fastest car. Especially with the Astons now making that step that they’ve done, it left us behind a little bit.

“If we can get back into that group – you see it every weekend, there’s always a different car getting into Q3 in that midfield pack – of course if we can have opportunities where we can fight in them positions that’s really what we need, we need to be in front of the others in the constructors’ championship.”