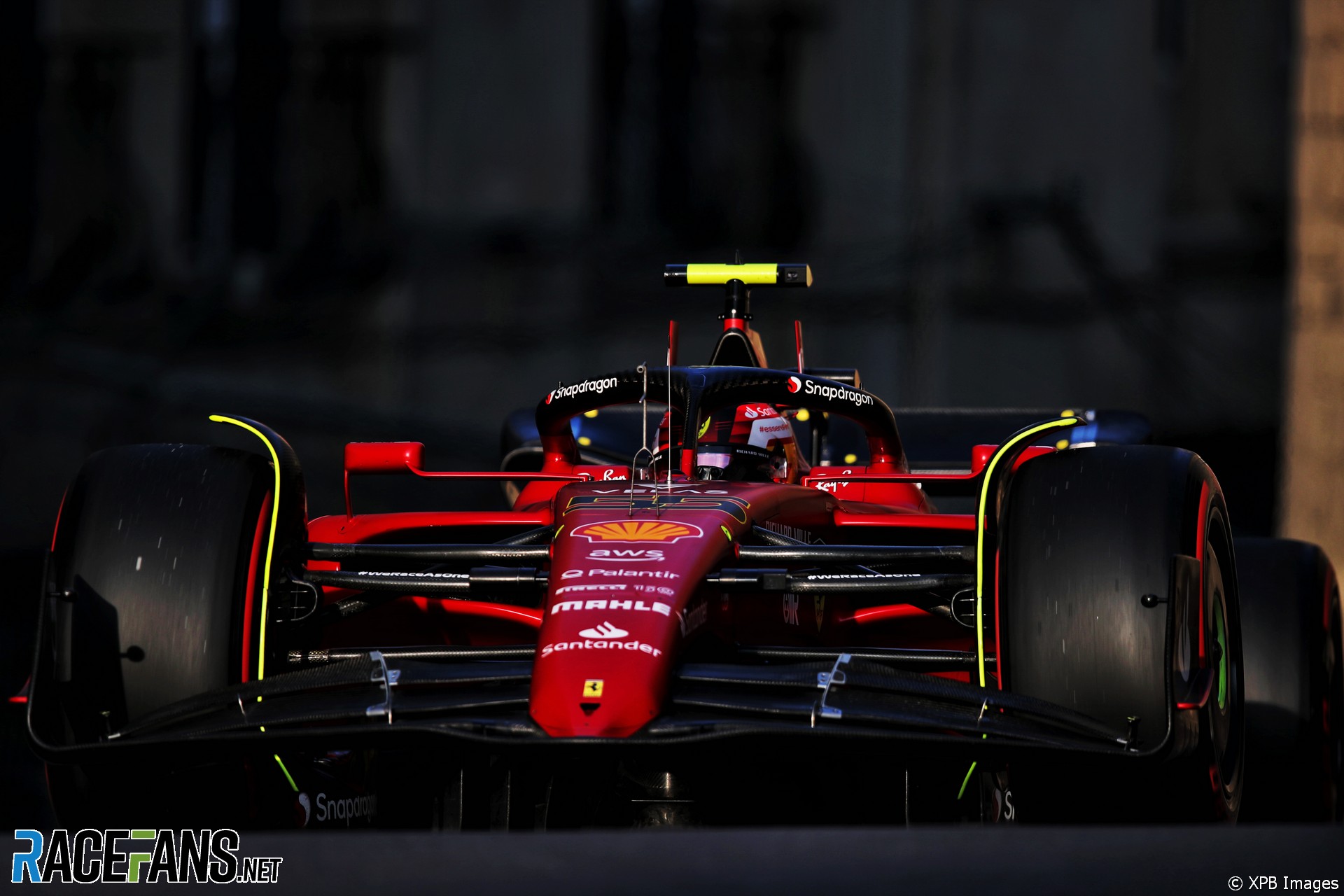 Formula 1 drivers have raised concerns over the possible long-term effects of the porpoising many of them are suffering in their cars this year.

Eight races into the season, several teams are still experiencing the phenomenon. It has arisen due to the different approaches they have taken to the new technical regulations introduced for 2022 which allowed teams to generate more downforce using their cars’ floors.

The severity of the problem varies from team to team. Some largely avoid it, others encounter it but are still able to race competitively, while others find it restricts their performance.

The severity of the porpoising also differs from track to track. Baku’s long and bumpy straights have made the problem especially severe for some teams: Mick Schumacher even suffered a water leak which caused a stoppage during first practice.

Carlos Sainz Jnr said he “suffered a lot with this” in his Ferrari on Friday, while team mate Charles Leclerc did not. “I had for some reason a car, or a floor, that was porpoising and bottoming a lot more than the other car with the same set-up,” said Sainz.

“It was for some reason very, very painful and there was a bit of chaos in the car going on. But I saw there’s also others struggling around this track.”

Drivers raised concerns over the effects porpoising is having on them during Friday’s meeting with FIA F1 race director Niels Wittich. “It got to a point where in the drivers’ briefing we all looked at each other and said ‘we need to do something’,” Sainz recounted.

“Because it’s okay one race, but can we do 10 more years like this? I doubt it.

“We kindly asked the FIA to look into it, to don’t, let’s say, listen to the teams too much and to listen to us [instead], that we were saying that it’s getting to a point where we are struggling, all of us, to handle this.”

Along with the aerodynamic changes to the cars, teams were also required to simplify their suspension systems this year. Sainz suggested relaxing this rule as a means of allowing teams to control the porpoising.

“We need something smarter on the suspension or in the way the cars are being run where the FIA controls a bit better the possibility of the teams to run that stiff, that hard, that kind of ride that you see on the straights,” he said.

“I’m pretty sure if you ask two or three engineers they will know the answer and what can be done to limit this and regulate it. But we just need the FIA to act as soon as possible because if not it’s going to start accumulating.”

“I don’t know if you can call it a danger, but you can say is it necessary to Formula 1 to have 20 drivers at the end of each race with back issues?” Sainz added. “My personal opinion is that with the technology that there is nowadays, why do we need to carry this painful situation into our careers when you can put up a pretty easy solution to it.

“So it’s more a matter of, is it really worth it? Is it necessary when there is possibly a very easy solution to put in place? I don’t think so, it’s not necessary and we should all, teams included, think about the drivers’ health.”

RaceFans understands a change to the 2022 rules was discussed last year which would have prevented teams running their cars as low as they are doing, in order to prevent the porpoising which has occured. However the change was not supported by enough teams to be approved.

George Russell, who is also a director of the Grand Prix Drivers’ Association, warned yesterday it is “just a matter of time before we see a major incident” due to the porpoising.

Fernando Alonso, the most experienced driver on the grid, described the ride in the current cars as “the worst of the last 20 years.”

“I think it’s a combination,” he continued, “this track has been very bumpy on the straights also with the old cars, so this year it’s exaggerated.

“I think there’s going to come a few tracks like Jeddah, that it was very smooth, or Australia and no one was complaining.”

A rules change is “going to be very difficult to agree for all the teams”, said Alonso, “but yeah, I wish they do something for the young boys – for me it’s okay for a few more years.”

Russell’s team mate Lewis Hamilton told his race engineer Peter Bonnington “my back’s killing me” during his long run simulation on Friday, due to the porpoising and bottoming they suffered. He believes the problem is “becoming a safety thing, for sure.”

“Today it’s bottoming through corners where you’re doing 180 miles an hour and big, big bottoming. And there’s not really a lot that we can do to stop it.

“We can’t have this for four years of this car. So I think that they need to work on it. I think all the drivers have spoken about it.”

McLaren team principal Andreas Seidl expects the drivers’ concerns will be discussed by the FIA.

“I think it’s a fair point that drivers mention,” he said. “I’m sure it will be discussed and followed up in the Technical Advisory Committee, like it has been done at the beginning of the season when these strakes have been introduced.”

“The severity you see on some cars, it’s brutal on the drivers,” he added. “That’s why it’s a fair point and a good point to bring forward to the Technical Advisory Committee and see if it makes sense to address it.

“At the same time, right now, every team knows also how to stop it immediately. But because of the nature of everyone being within competition, it makes sense to look at it as a whole group and the best interests of the sport moving forward.”