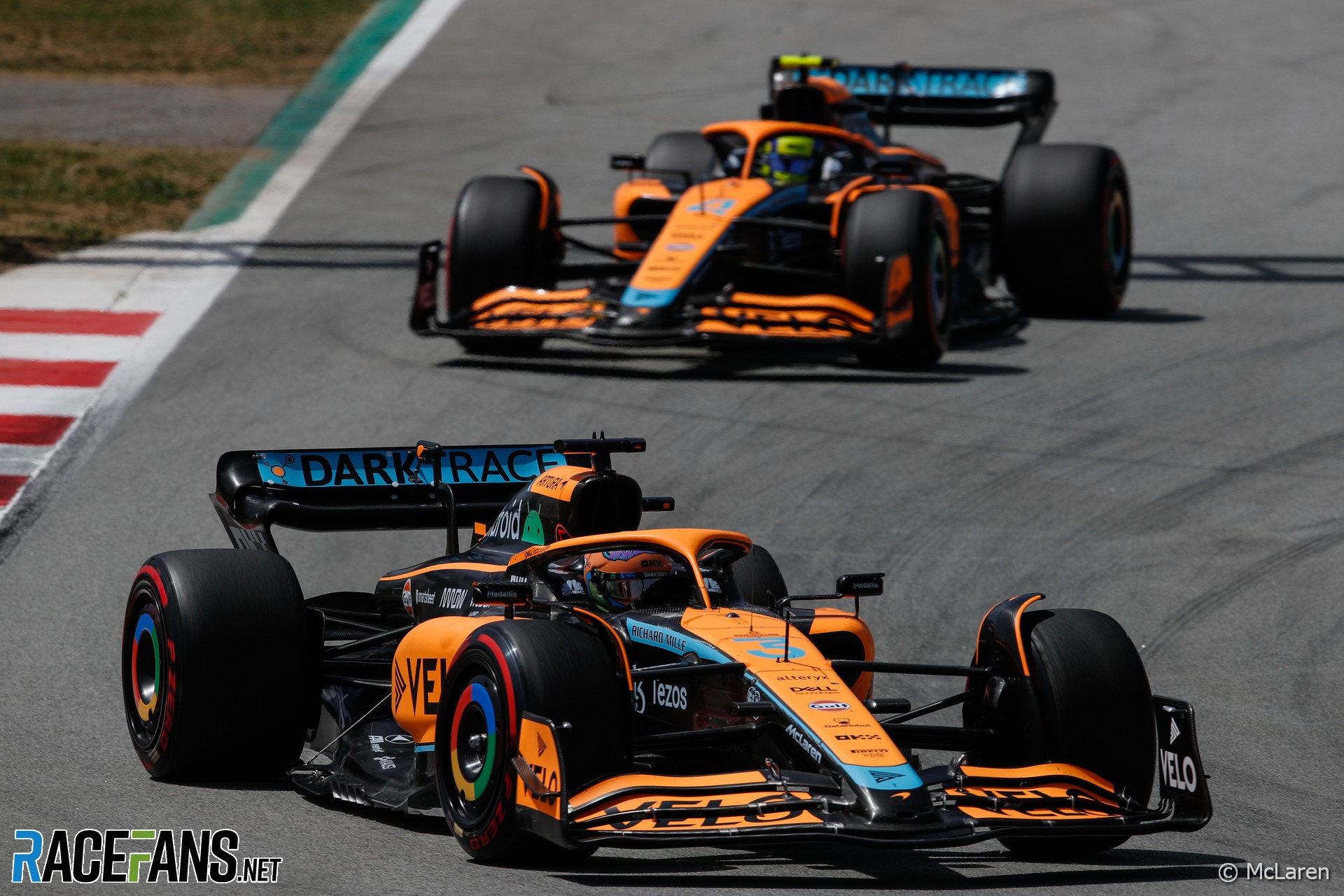 Daniel Ricciardo was mystified by his lack of pace compared to his team mate in the Spanish Grand Prix.

Ricciardo out-qualified team mate Norris in Barcelona but finished the race behind him, and said he felt a lack of grip from the first lap of the race.

“It was felt early on,” Ricciardo said. “I got up to eighth on lap one, obviously there was a few things going on around me, I remember Hamilton getting a puncture or something on the first lap. So we were a relatively good track position.

“But already from lap three, I knew that I was going to be doing some defending pretty soon,” he explained. “Then of course we knew it was two or three stops so I thought, okay, maybe we’ll pit, get a bit more pace on a different set of tyres. And no, we were kind of nowhere from the start to the end.”

Ricciardo described the race, which he ran on a three-stop strategy, as “one of the longer ones I’ve had in recent times.”

“It wasn’t like there was a slow stint,” he said, “it was a slow race from the start, but one where I just couldn’t basically couldn’t use any grip. And if I tried to use it, I was just sliding and slow.”

He said he “had no fight” as he slipped from ninth to 12th in the tight midfield battle.

“I tried to be conservative on the tyres and I just had to drive too slow to do that,” he explained. “[The car] simply was operating on a lower level of grip than everyone. I’m sure everyone complained because it’s hot and we [had] poor track conditions in terms of the heat.”

Riccardo doesn’t believe set-up differences between the two McLarens fully explain his deficit to Norris, who finished over 45 seconds ahead of him. “There’s always little bits here and there. But to be honest I hope to find something else.

“I hope that it’s, ‘oh, wow, this was wrong’ or ‘this was something,’ because when there’s set-up and stuff you could say, ‘oh, there’s a couple of tenths.’

“I haven’t seen the times yet but I know that I was just slow really,” Ricciardo admitted. “So I’m sure at times I was probably a second, if not more slower. So it felt more than set-up.

“So hopefully there’s something because obviously I’m experienced enough now to try throughout the race different things and try to push on the tyre, try to be conservative and approach the corners in different ways.

“But the net lap time by the end was the same each time I crossed the line, whether I’d use the tyres or not. So it was one of those ones where you’re just kind of scratching your head.”

McLaren team principal Andreas Seidl said they need to get to the bottom of what went wrong for Ricciardo.

“We need more time to analyse and understand why he was going backwards really from the first lap onwards and also then going to a different specification, tyre compound didn’t change the situation. That’s something we need to analyse and try to get on top of.”