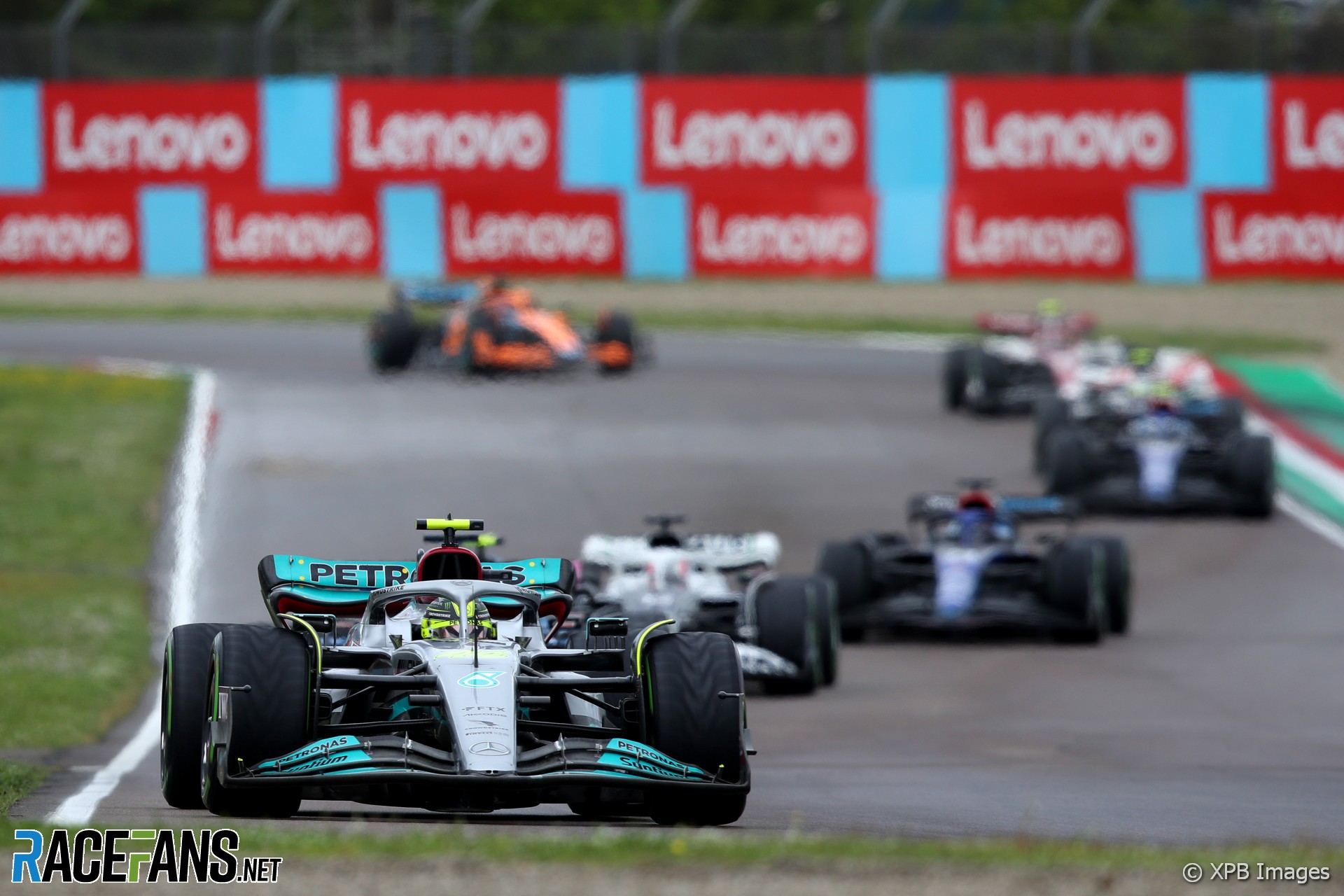 The two Mercedes drivers lined up 11th and 14th on the grid for the Emilia-Romagna Grand Prix, but finished much further apart.

George Russell made a strong start, picked up another couple of places and coped with a set-up imbalance as he clale
Meanwhile Lewis Hamilton was unsuccessful in his attempts to breach the top 10 and ended up stuck in queue of cars, ruing a lack of straight-line speed which made it difficult to overtake.

Their conversations with their race engineers throughout the afternoon reveal how their races unfolded, and also their contrasting styles on the radio. Russell had an almost continuous back-and-forth with his race engineer, Riccardo Musconi.

In contrast Hamilton’s exchanges with Pete Bonnington were much briefer. This reflects the difference between Hamilton in his 10th season as a Mercedes driver and Russell only in his fourth race for the team. The newcomer often prompted Musconi to confirm whether he was managing his car the way the team wanted him to.

Russell got away well and profited from the first-corner collision between Carlos Sainz Jnr and Daniel Ricciardo, moving up to sixth place. Although Hamilton also moved up thanks to the chaos, he lost a place to Lance Stroll who lined up behind him.

Ahead of the restart, Russell was surprised to note how Charles Leclerc, two cars ahead of him, was treating his tyres.

Russell quickly found his way past Kevin Magnussen, while Hamilton was boxed in behind the Aston Martin ahead of him.

Now running in free air, Russell felt more confident with the conditions and urged his team to consider taking the opportunity to be one of the first to put slick tyres on, and potentially make up places. However Mercedes were concerned he would immediately emerged in traffic if they did.

Russell couldn’t understand why other drivers behind him were reluctant to take the slick tyres. “I was asking to go slicks three laps before we boxed but nobody else was pitting,” he said.

“I would have just come out in the middle of the pack behind guys on intermediates. So I don’t know why nobody else at the back was taking the gamble because, for me, it was clear slicks I think three laps before I pitted.”

Russell still changed tyres earlier than Lando Norris ahead of him, who he briefly closed on when the McLaren driver switched rubber the next time around. He was satisfied with the team’s decision not to bring him in sooner.

“I would have came out in P13, I think, in a load of traffic of intermediate runners. We were pulling in two seconds a lap on these guys, you needed them to pit to clear up the space for us to pit.

“I was shocked when nobody else went sooner, it was really strange because it was clearly dry.”

However one setback during his pit stop affected the rest of his race. Mercedes were unable to increase the front wing flap on his car, which was necessary to correct its balance for the move to slick tyres. He was told soon after he rejoined the track.

Meanwhile Hamilton had lost another place in the pits to Esteban Ocon. The stewards judged Alpine had released their driver unsafely in front of the Mercedes and gave him a five-second time penalty, though this was only added at the end of the race and he continued to circulate ahead of the Mercedes.

Hamilton was finding it difficult to attack any of the cars ahead of him, saying his car was too slow on the straights. He queried why race control hadn’t activated DRS at this stage in the race, something other drivers also asked about on their radios.

With more than half the race still remaining, Mercedes’ concern for Russell was to keep him ahead of the driver who occupied his cockpit last year, Valtteri Bottas. Following a slow pit stop due to a temporarily cross-threaded front-right wheel nut, the Alfa Romeo driver was closing in.

Russell, meanwhile, was struggling more due to his shortage of front downforce. “It was doubly difficult because I was already struggling with a lot of understeer on the intermediate,” he explained, “so I would have wanted to make a big step initially for that and then another big step for that inter-to-slick change.”

Hamilton’s pace was badly compromised, and he soon got a call he did not want to hear: Race leader Max Verstappen, his former championship rival, was coming by to lap him.

As the race drew towards its final phase, Russell was growing increasingly concerned about his tyres. “That front-right was just falling to bits, it was so far out of bed on the set-up.”

He asked the team if it would be possible to make a pit stop at the end of the race, but they were wary of surrendering places to their rivals.

Russell was told he would have to tough it out until the end. Meanwhile Hamilton was also entertaining similar thoughts about an extra pit stop.

As Bottas closed on Russell, Mercedes became increasingly wary of the Alfa Romeo getting within DRS range.

However Hamilton was finding his DRS was of little use in attacking the cars ahead of him, as they were also able open their rear wings. He told his team he needed more power, and did not agree with their suggestion he wasn’t activating their ‘overtake’ boost as early as was possible.

Having been lapped, Hamilton took the chequered flag on the tour before his team mate. Russell had picked up another position thanks to Leclerc’s spin, and successfully held off the charging Bottas to the end of the race. The mood was very different on the Mercedes drivers’ radios as they drove back to the pits.