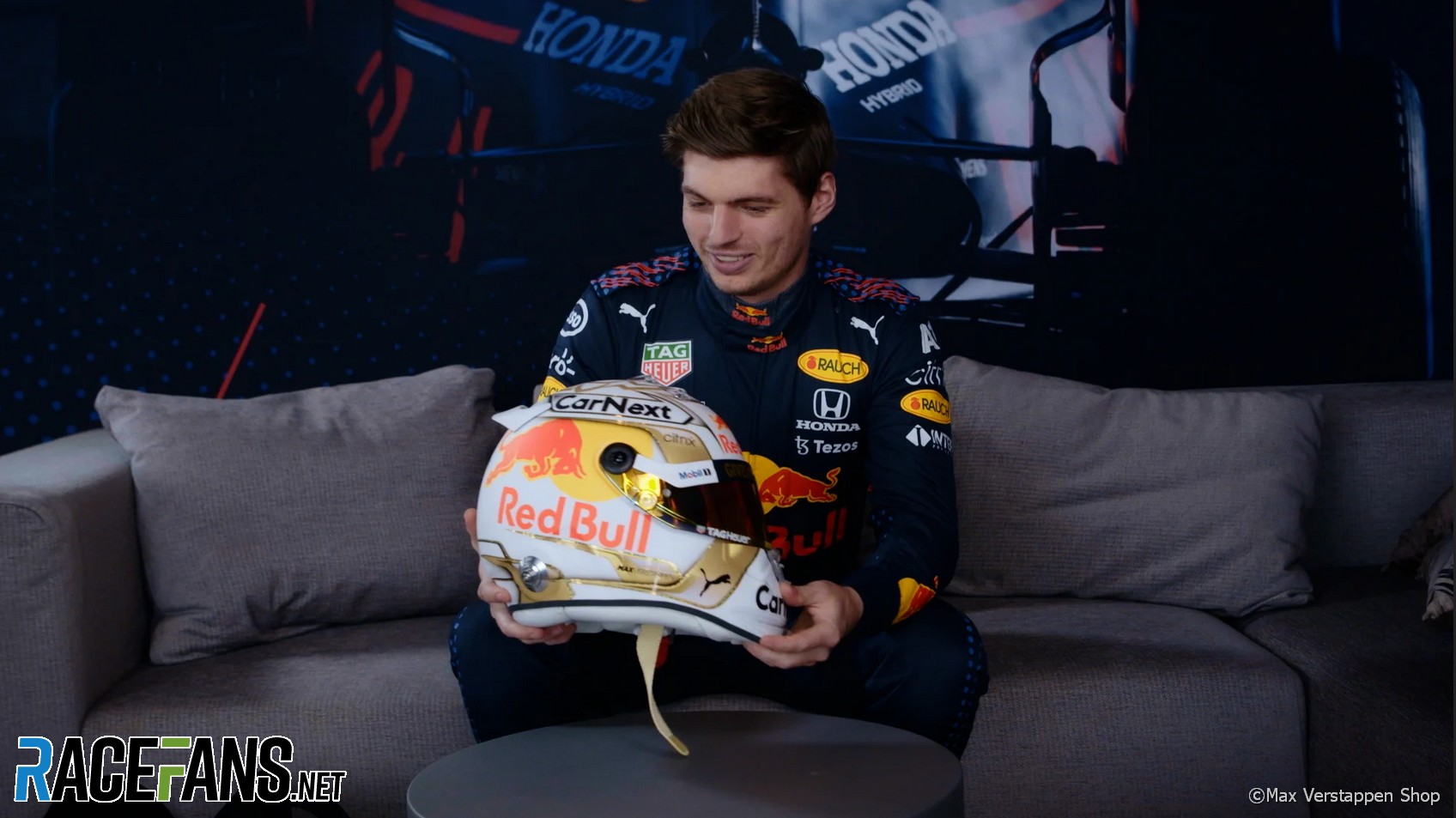 In the round-up: Max Verstappen has revealed a new gold helmet design for the 2022 Formula 1 season to commemorate his world championship victory last year.

Formula 1 world champion Max Verstappen has revealed an updated helmet design featuring a gold motif to celebrate his reign as world champion through the 2022 season.

The Red Bull driver secured his first world championship in controversial circumstances in the final race of the season in Abu Dhabi after overtaking rival Lewis Hamilton on the final lap following a contentious late Safety Car restart.

Ahead of the new season, Verstappen showed off in a video posted on social media the updated design that replaces the typical orange accents of his native Netherlands with gold colours and a small gold star at the rear of the helmet to symbolise his championship victory, similar to those used on the crests of national football teams who win the World Cup.

Verstappen also presented the graphical design of the number one he will run with as his driver number on his car throughout the 2022 season, as is his privilege under the regulations as the current world champion.

The Force Indy team have announced they will step up from the USF2000 series to Indy Lights with 24-year-old multiple Trans Am champion Ernie Francis Jr driving the team’s number 99 car.

The team, run by team principal Rod Reid – the only black team owner in the IndyCar system – has received support from IndyCar Series owners Penske Entertainment under the Race for Equality & Change programme, designed to increase diversity and representation for people of colour on and off-track in the US-based series.

Francis is a seven time class champion in the Trans Am series and will be the only African American driver competing in IndyCar or Indy Lights. Francis also raced in last year’s Formula Regional Americas Championship, finishing third in the standings with three race wins.

“I could not be more thrilled to promote our group to the Indy Lights championship with Ernie Francis Jr,” said Reid. “His work ethic and history of success speak for itself.”

“After getting a taste last year and beginning to learn what open-wheel racing is all about, I found myself wanting more,” Francis said.

“Open-wheel cars are incredible to drive. To know that I’ll continue my education with Force Indy and only one step away from IndyCar makes this unbelievably special. I cannot wait to get started.”

Venturi team principal Jerome D’Ambrosio believes Formula E’s new qualifying system introduced in today’s opening round in Saudi Arabia will help the series build a narrative through the course of the season.

Formula E’s previous group qualifying system was long criticised by drivers for unfairly penalising drivers nearer the top of the standings and having too much of an influence over how competitive individual drivers could be. The system led to 14 drivers heading into the final rounds of last season in Berlin with a mathematical chance of winning the championship.

Today, Formula E will introduce a new ‘duels’ system into qualifying, which D’Ambrosio thinks will help create the kind of championship battles that fans want to see in the series.

“I think it was good to address the qualifying format because things evolve rapidly in a young championship like ours,” D’Ambrosio said.

“I think it was important to do that to be able to create not only more sporting equity, but also to ensure that you build the story during the season. I think that’s what fans want as well. We need to get to the last race with a couple of drivers in the hunt and not 14 like we had last season. I think that’s a bit too confusing.

“But having said that, what we had before was right here for it’s time. And now we’ve identified something that can be improved and it was done directly as of this season. So I think it was the right call. This is my personal opinion.

Welcome to Season 8. There's No Turning Back. ⚡

"The Cassation also ordered the return of the confiscated yacht, but the twist is that its legal administrator recently sold it, even if Briatore’s lawyers had asked him to wait until the final verdict. The yacht was snapped up at a judicial auction by Bernie Ecclestone, a friend of Briatore and former Formula 1 boss, at a discount price of €7 million (about $7.8 million), a third of its estimated value."

Will having concerts be out of tune in a pandemic? (The Straits Times)

"While Mr James Walton, the sports business group leader for Deloitte South-east Asia, is expecting the Singapore Grand Prix experience to be less 'crowded and cramped as in previous years' as a whole, he is confident the concerts and other fringe events will take place."

"This particular chassis is R24-07, which was campaigned by Alonso in the final three races of the season in China, Japan and Brazil, where he placed fourth, fifth and fourth respectively."

"We are very excited to welcome Ferrari to the RaceRoom platform and glad to announce that the Ferrari 488 GT3 Evo 2020 will be part of the upcoming DTM Car Pack."

"Both the personal and professional tracks of race car driver Bubba Wallace's life are chronicled in this new docuseries."

With Max Verstappen named RaceFans’ top ranked F1 driver of the 2021 season, @Robbie does not expect the world champion to change his driving style any time soon…

The bottom line is Max is excellent at wheel to wheel racing and everyone on the track is well familiar with his skill and aggression that he likely learned from the likes of all the drivers preceding him, not just from his parents while karting. He takes no prisoners and it is up to the other drivers who have seen that to be aware of it if/when they get into combat with him. What we do know is that Max has said time and time again that he will not be changing his driving style. And as we see, he makes it work. This is no different than what many other drivers have done in the past and been revered for it being WDC-level driving.

Max has shot a harpoon across everyone’s bow, and they all know what they have to be wary of when it comes to racing him, what they can expect, and Max wouldn’t have it any other way. And therefore other drivers attempting to beat Max can have that challenge to look forward to, and if they succeed, well, what a huge feat for them that will be. Max will be giving the other drivers a chance to rise to the occasion, just as I’m sure Max would rather LH stay in F1 (I’m positive he will) so he can beat him on the track and not because he is no longer there. I’m sure it will be the same for the other drivers who must recognize what a mountain to climb it would be to beat Max, but then also what a mountain of reward that would feel like too.
@robbie

Happy birthday to Hoshi and Kingshark!