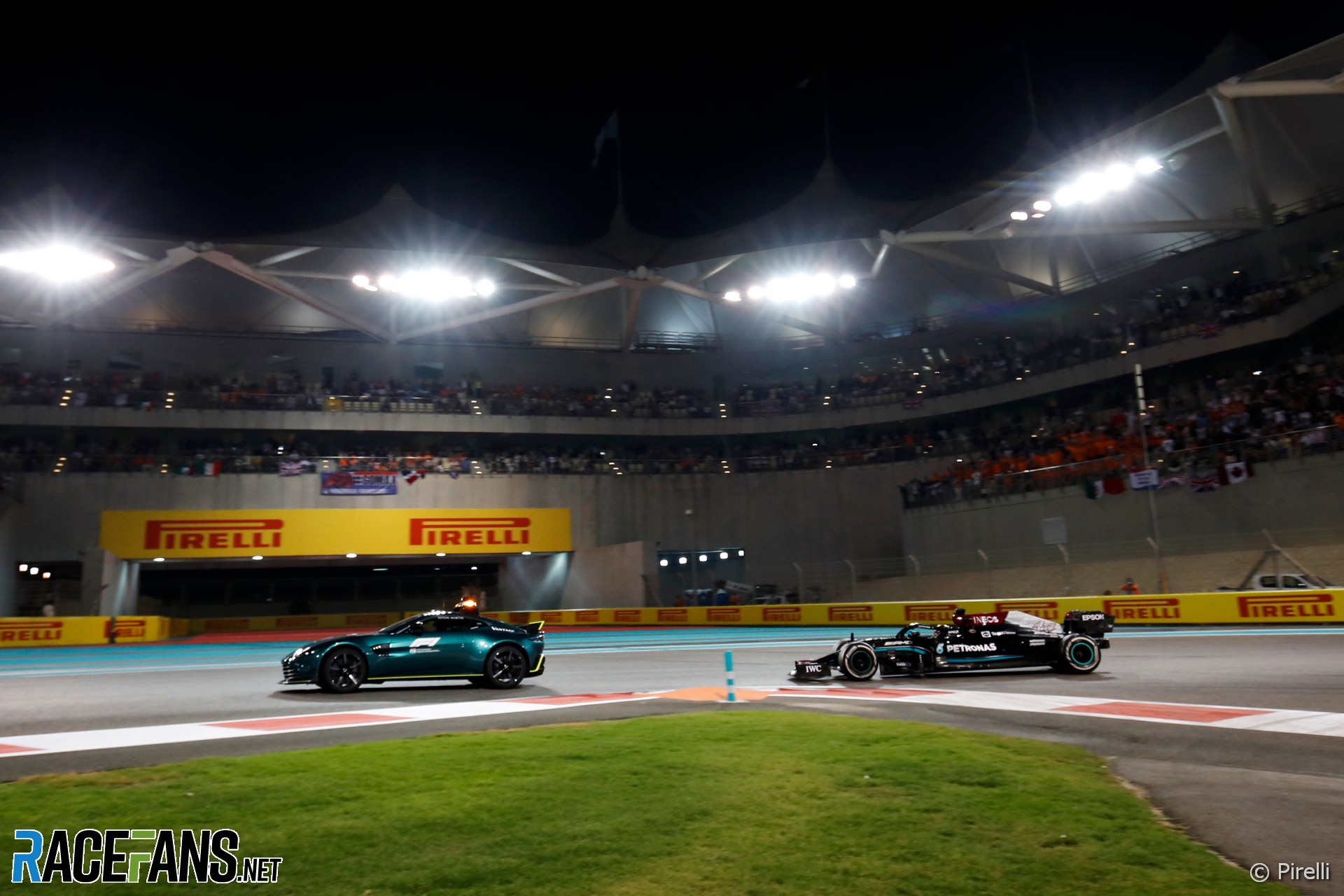 It called to mind the final seconds of the 2008 Brazilian Grand Prix, Nigel Mansell’s tyre explosion at Adelaide in 1986, or the contentious championship-deciding collisions of the nineties.

But was the drama contrived by an incorrect decision from race control?

The race was neutralised after Nicholas Latifi crashed on the 53rd lap of 58. Several drivers took the opportunity to pit.

Behind the Safety Car were six drivers on the lead lap and eight a lap down. Race leader Lewis Hamilton had five backmarkers between himself and second-placed Max Verstappen. Two other stragglers followed, separating Verstappen from the third and fourth-placed drivers, Carlos Sainz Jnr and Valtteri Bottas. Another backmarker came next, and then the AlphaTauri pair in fifth and sixth.

The time it took to clear Latifi’s crash scene originally led to race control advising teams lapped cars would not be allowed to overtake. Four minutes later, after the penultimate lap had begun, this decision was changed, and the first five of the eight lapped drivers were waved by. This left Hamilton and Verstappen running together, followed by two lapped drivers, then third-placed Sainz and the rest.

The legality of the decision was disputed after the race by Mercedes in a protest. It was rejected, but they are considering an appeal.

With the outcome of the championship riding on the race, did race control make the best decision in the interest of the series?

Race control were determined to allow the championship-deciding race to finish under green flag conditions, ensuring the title would be decided with wheel-to-wheel action between Hamilton and Verstappen. It would have been an enormous disappointment for a large audience to have sat through what was a largely processional event, only to have the race end under a Safety Car.

Releasing five lapped cars and allowing them to overtake the Safety Car also ensured an ideal finish to the championship. Without that, Verstappen would have had to get past all five of those cars in order to have any chance at sizing up a move on Hamilton, and while they would have been duty bound to observe the blue flags, the odds would have been stacked against Verstappen clearing them in time to attack his rival.

Allowing some drivers to un-lap themselves but not others is deeply unfair and caused confusion and dissatisfaction which wasn’t limited to Mercedes. If the race director wanted to ensure a green flag finish to the race, the option existed to red flag the race and perform a standing restart. This was done in Baku with just two laps remaining and would have been a fairer arrangement.

There are also doubts over whether the signal to restart the race was given correctly, as highlighted in Mercedes’ protest. The regulation which states “once the last lapped car has passed the leader the Safety Car will return to the pits at the end of the following lap” was not followed, as the Safety Car pitted immediately.

As the television broadcast showed, FIA Formula 1 race director Michael Masi was under pressure throughout the event from the Mercedes and Red Bull camps on which calls to make. While this may have been defensible as far as incidents involving their drivers go, it was completely inappropriate for them to be telling him how to handle the aftermath of a crash and resumption of the race. It’s time to put a stop to this kind of mid-race lobbying.

Rightly or wrongly, it gave an impression Masi had been pressured into changing his original decision not to allow cars to un-lap themselves. The eventual arrangement was demonstrably unfair and appears to have violated the FIA’s own rules, irrespective of its consequences on the championship.

I didn’t agree with the decision to reintroduce the ‘lapped cars may un-lap themselves’ rule a few years ago because of the delays and inconsistency it can provoke. If F1 is going to have it, it should not be enforced selectively. Race control shouldn’t have arranged the restart as it did when there were fairer options available within the rules. On this occasion ‘the show’ took clear priority over the sport.

Are you happy with the way Formula 1 handled the restart at the end of the Abu Dhabi Grand Prix? Cast your vote here and have your say below.

Do you agree race control handled the last-lap restart correctly?