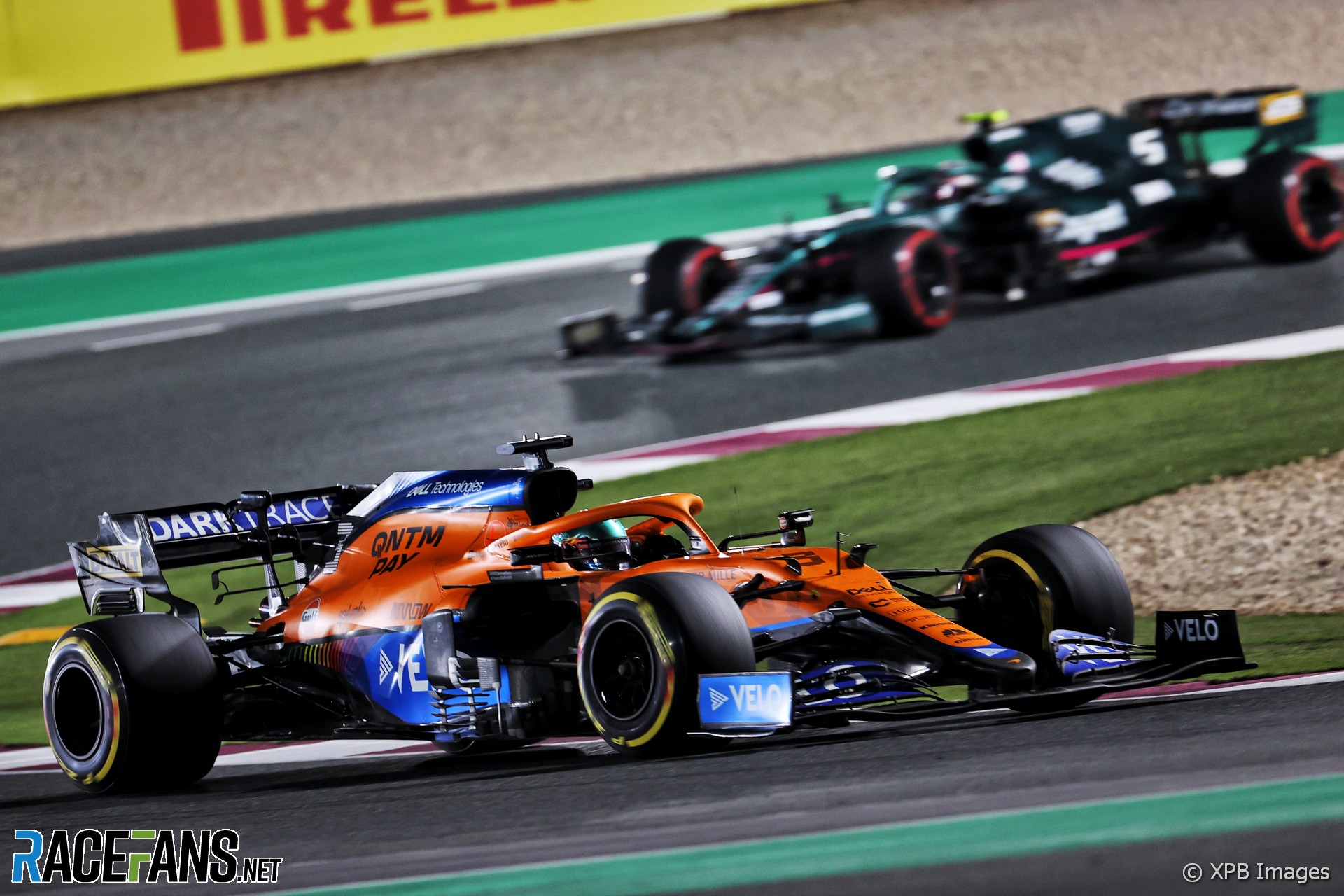 By lap 43 of the Qatar Grand Prix, things were looking very bad indeed for Daniel Ricciardo.

Team mate Lando Norris was nine places and 45 seconds up the road, having gained more than a second on him per lap. He’d just been overtaken by Valtteri Bottas in a damaged Mercedes running some way off the pace. What had gone wrong for the number three McLaren?

Ricciardo’s race got off to a difficult start. From 14th on the grid he lost two places at the first corner. “The actual launch wasn’t bad,” the McLaren driver explained after the race. “But there was Charles [Leclerc] and [Lance] Stroll and I think I was kind of in the middle and I basically couldn’t see turn one.

“If you can’t see, obviously when you’re towards the back it’s quite hard to see that far through the pack, so then you kind of look for the braking markers to get a reference on when to brake, and I just couldn’t see them. So I kind of stayed in it ’til as long as I thought and then I lifted and I ultimately just lifted way too early and then a lot of people I think on the outside had a clear run and went.”

That poor start left him 16th. But within a few laps he’d picked off the likes of George Russell and Antonio Giovinazzi. From there on, however, he was unable to make any serious inroads into the points-paying positions.

The problem for the number three McLaren was fuel management. From an early stage in the race, Ricciardo was being told to hit surprisingly tough targets for conserving fuel, lifting and coasting more than usual.

The first sign came as early as lap 10, when Ricciardo queried a message on his dash with his race engineer Tom Stallard:

As Ricciardo lifted early before each corner and coasted in, his tyres and brakes began to drop in temperature, further compromising his lap times.

“I started doing what I thought was already a lot and it was not enough,” Ricciardo explained. “So Tom said you need to do more, it’s not enough and blah blah blah to a point where I think at times we were losing probably two seconds a lap fuel saving.

“With that, brakes get cold, tyres get cold and you lose grip as well. So it’s just kind of a downward spiral.”

Initially Ricciardo’s lap times were in the vicinity of his team mate’s. Norris was stuck behind Gasly until lap 12, then his soft tyres began to fade, though even as their pit stops approached Ricciardo wasn’t able to use his mediums to lap quicker than his team mate.

As Ricciardo’s pit stop neared, he advised his team he didn’t want to switch to the hard rubber. However the softs would have forced him towards a two-stop strategy instead of one, which would have compromised his race even further.

Both drivers had hard tyres for the second stint, Ricciardo’s a lap younger than his team mate’s, but he was still much slower. “We were fuel saving for a good half of the race and that just took us way, way out,” he said.

“It’s the most I’ve had to save and the earliest in the race I’ve ever had to save,” said Ricciardo, who told journalists after the race they could have lapped at the pace he was doing. “I was coasting into every corner and it was never enough.”

Eventually the team realised something in the system was giving them wrong information about how much fuel Ricciardo needed to save:

“I don’t know what happened, obviously the system or they got another reading, but then Tom said ‘alright no more, just push’,” Ricciardo recalled. “I said, ‘but wait, no fuel saving?’ He goes ‘no, just push’.

“So I was like, I’m so confused. It’s clearly something that’s gone wrong.”

Ricciardo immediately brought his lap times within a few tenths of what his team mate had been doing. But by this stage Norris had succumbed to a front-left puncture which, ironically, Ricciardo may well have been spared because he was driving so far within the car’s potential.

But with the next car of Pierre Gasly around half a minute up the road in 11th place, Ricciardo’s hopes of taking points were over.

“It’s clearly a system error,” Ricciardo reflected after the race. “It’s a shame because when I could push, I felt the reference time I got at the time I was able to get, but we were at the mercy of an error today with the reading system.”

22 comments on ““I don’t know how much slower I can go”: Inside Ricciardo’s unnecessary economy run”