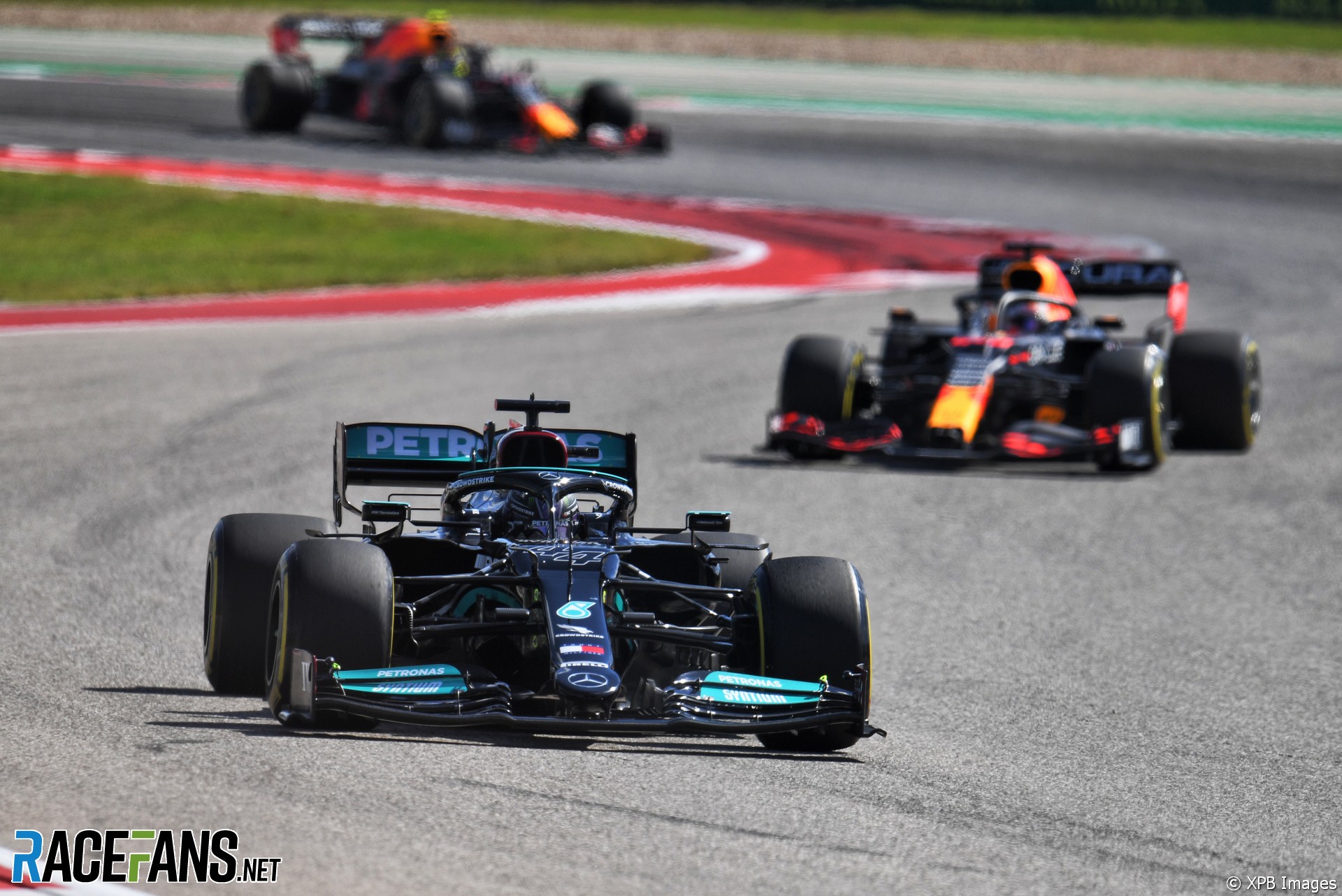 Despite describing the United States Grand Prix as one of their toughest races this year, Mercedes were encouraged by the fact Lewis Hamilton was able to challenge for victory.

Max Verstappen extended his championship lead by winning the race from pole position for Red Bull. But Hamilton joined him on the front row of the grid, led the race and finished just over a second behind his rival.

Mercedes’ head of trackside operations Andrew Shovlin described it as one of the team’s weaker showings in the second half of the season.

“You need to really, rather than just look at this weekend, look at the last few weekends and this is the toughest one that we’ve had for a long time,” said Shovlin. “I think since the break, probably only Zandvoort has really felt as difficult as this one was.”

However he took some consolation from the team’s performance in Austin. “While Max had us beat, I don’t think that was a comfortable win for them and we were sort of forcing them to take some risks. And if that’s a bad race for us, then hopefully if we can have more of the good ones we’re still in a decent position.”

Shovlin also feels Red Bull’s margin of superiority in the last race wasn’t as large as Mercedes’ has been in previous rounds. “I think the pace that we showed in Turkey, in Sochi, particularly in terms of race pace probably put us a bit further ahead of them than they’ve been ahead of us [in Austin],” he said. “Quali was tricky and we sort of managed to get through that still with a car on the front row.

“But it really will just come down to where the cars stack up over the remaining races, who adapts well. For us, the encouraging thing was we could still put them under pressure when we clearly didn’t have the best car.”

Verstappen’s victory last weekend was his first since the Dutch Grand Prix, where Mercedes were also at a disadvantage to Red Bull, which led Shovlin to expect the Circuit of the Americas would be a difficult venue for them.

“We were aware of the areas where we may struggle,” he said. “Zandvoort was one where we were struggling with the rear end and they seemed to be in a better position.

“That experience of Zandvoort gave us cause for concern coming here. We knew that the circuit’s going to be one where you’re overheating tyres.”

“But regardless of that, we’ve still got to arrive with a car that’s performing at the best of the car’s ability and give a car to Lewis and Valtteri [Bottas] that allows them to do their best job. And that’s the only thing that we’re working on. We’re not really worrying about where Red Bull are.”

The best Mercedes can hope for in Mexico is to “take the race to them like we did” in Austin, he said. “That’s probably the best-case scenario that we’re going to envisage.”

“We know where we’ve struggled in the past, we know what we need to be working on and that’s what we’ll get stuck into.”