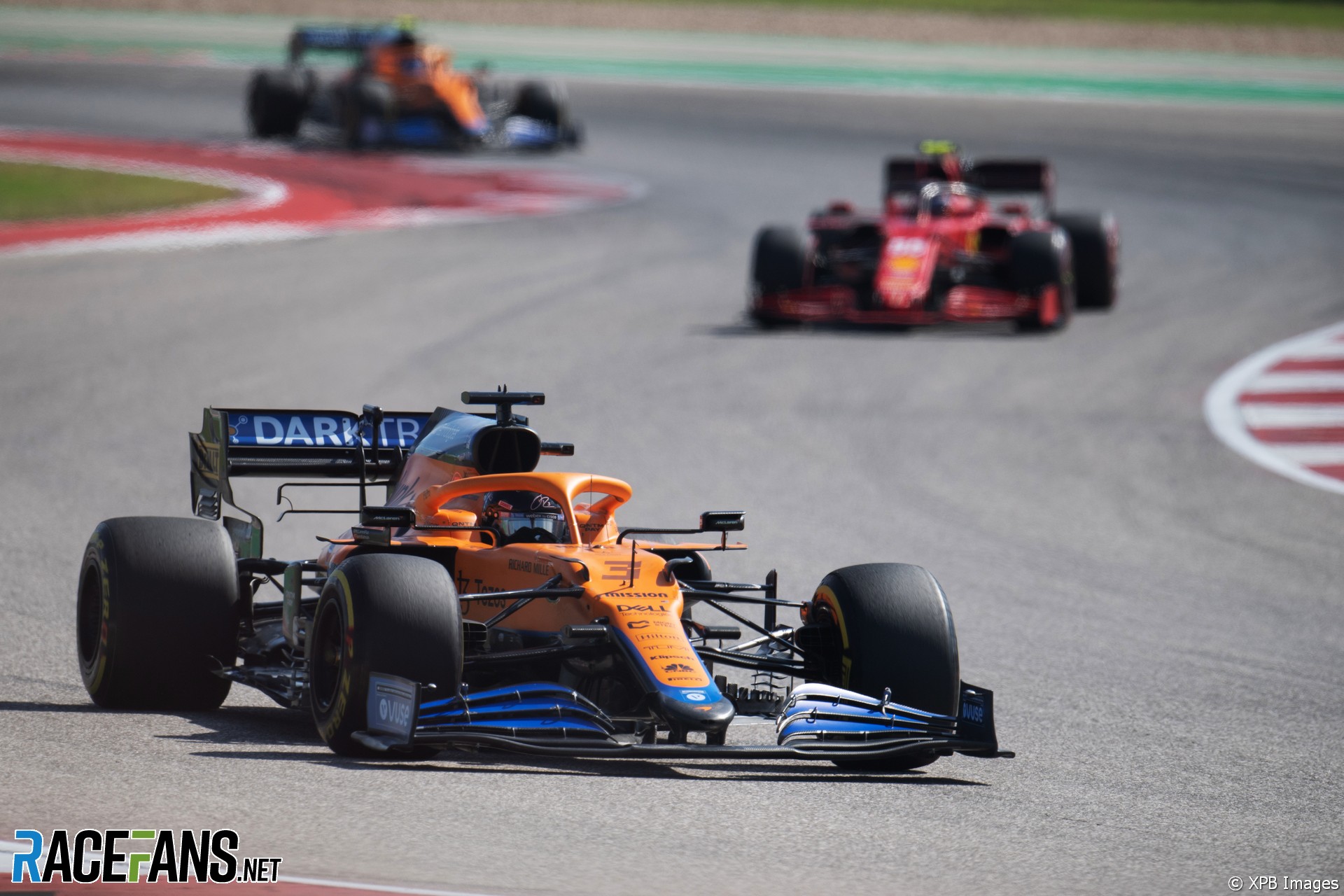 Carlos Sainz Jnr says he let Daniel Ricciardo pass him by mistake on the first lap of the United States Grand Prix.

The Ferrari driver intended to let Ricciardo’s team mate Lando Norris overtake him after he passed the McLaren driver off the track at turn 12.

Sainz arrived at the corner in between the two McLaren drivers on the opening lap. He ran wide at the exit of the corner and rejoined alongside Norris. The pair went into turn 13 side-by-side where Sainz claimed the position.

The Ferrari driver realised he needed to relinquish the position to his rival because he had left the track. He tried to do this into turn 16, where he slowed down.

However Ricciardo in the other McLaren, who had passed Norris in the preceding corners, came through on the inside of Sainz instead.

Sainz explained how the confusion arose. “I got a poor start off the line and this put me on the back foot,” he said. “So instead of being on the attack on the soft tyre I was defending from the McLarens.

“I actually managed to pass them back, then I went side-by-side with both of them into turn 12. I was in the middle. I think it was Lando who braked really late on the inside. We actually all three nearly took Charles [Leclerc] with us in the attempt to stay ahead of each other.

“Just to give a bit of space to Lando, I decided to go wide to make sure we don’t crash. When I rejoined the track I am ahead of Lando and Daniel in that order and exiting turn 15 I took the conscious decision to let what I thought was Lando by during turn 16 just to make sure that I didn’t get a penalty from the stewards.

“But what actually happened is during that battle Daniel overtook Lando. So I actually led by Daniel and not Lando because now Lando was the third of the group.”

On lap six the Sainz was told by his team to let Norris past, based on their conversation with race control. Sainz disagreed with the decision, but went along with it.

Norris said he came close to colliding with Leclerc when he dived down the inside of Sainz and Ricciardo at the start. “I was very nervous because Charles was just ahead so if I braked too late and locked up I would have crashed into him and I was very close to doing it. And I knew Daniel was on the outside so I didn’t want to do anything stupid.

“I had to almost take the cautious approach and therefore it didn’t pay off. If Charles wasn’t there, then I think I could have got both of them. So a bit of a shame.”