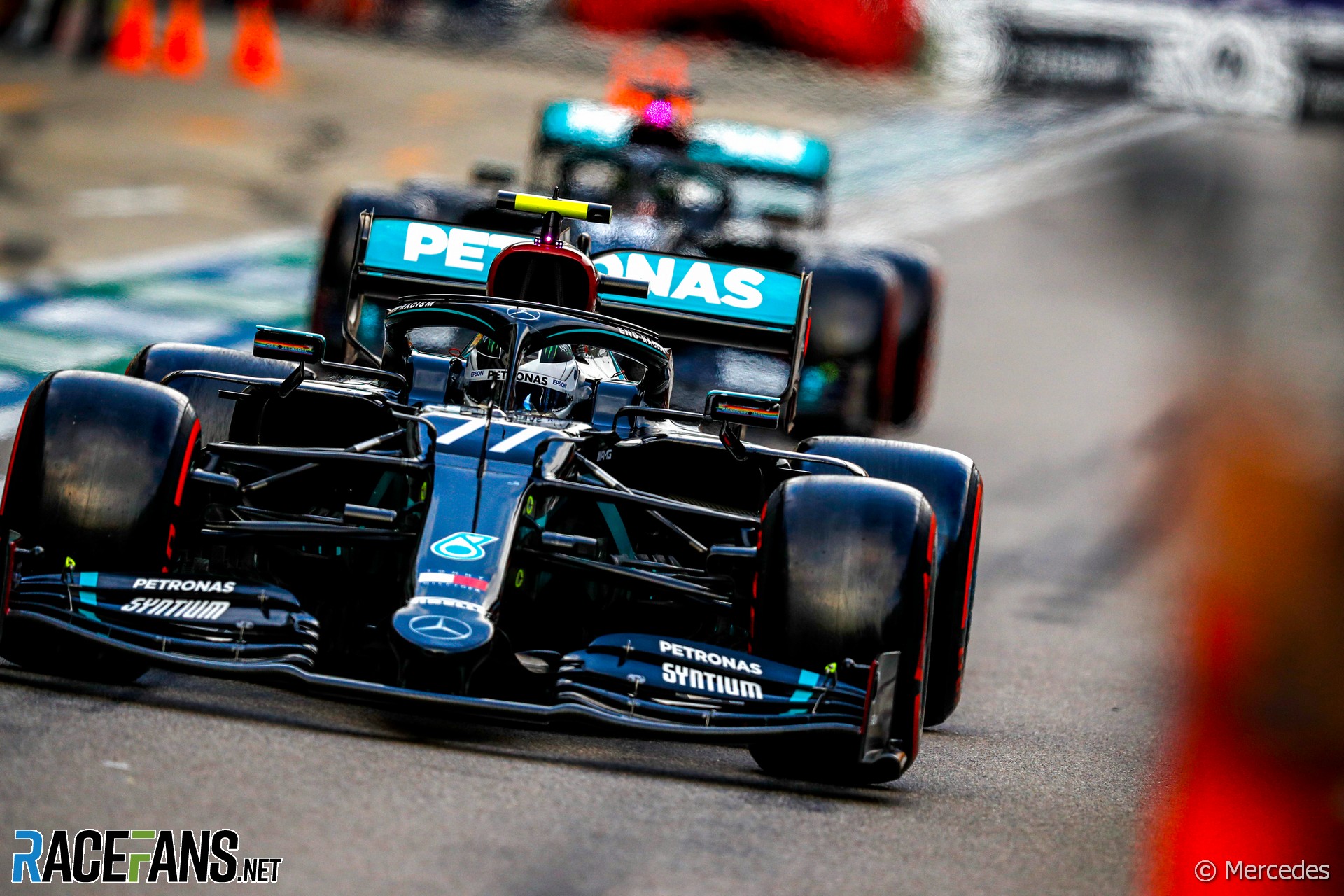 Mercedes ran rampant throughout 2020 as their under-performing rivals Ferrari and Red Bull let them off the hook.

The black cars could – and perhaps should – have won every race last year. They came remarkably close to taking pole position at every event. Aside from the freak circumstances at Istanbul, only at the season finale were they beaten to the quickest lap time in qualifying, and even then it was by a mere 25 thousandths of a second.

Until last year, Mercedes’ rivals had steadily closed the gap to them during the V6 hybrid turbo era. The 2017 to 2019 seasons were far more competitive than the three which went before.

So can we expect more of the same Mercedes dominance in the 2021 F1 season? Or does the fact Red Bull successfully chipped away at their lead throughout last year give cause for optimism that the coming championship will be about more than just the two guys in the W12s?

How dominant were Mercedes throughout 2020?

The gap above shows how far each team was behind Mercedes at each race in relative (percentage) terms across all sessions. Clearly, Mercedes held the upper hand for much of the year. But race-by-race variations due to conditions, differences in tracks and so on makes it hard to get an overall impression.

What the graph above does highlight, however, is how extraordinarily unusual the Turkish Grand Prix was. We haven’t seen race conditions like this for many years, and as a result its value to understanding the season is doubtful.

It was clear during Friday practice the resurfaced track offered very little grip. The rain which fell over the following day created wildly varying grip levels. As the amount of water on the track changed, and teams switched between different tyre compounds, the outcome was something of a lottery.

The quickest lap times of the weekend were seen in Friday’s dry practice, and these too varied so far from the norm they have been discounted here as unrepresentative.

Taking the average gaps between the teams from race to race reveals a clearer picture of how each team compared to season-long pace-setters Mercedes:

At the beginning of the year Mercedes were, on average, 1% quicker around a given lap than any of their rivals. This prompted them to take a decision which will have significant ramifications for the season ahead: They held off developments on their 2020 car, and prioritised work on their new chassis. Comparatively few updates arrived for the W11 over the rest of the season.

We won’t know until the start of this season how great a benefit Mercedes will reap from those tactics. Clearly it cost them little in terms of performance last year, though Red Bull steadily closed the gap to them as the season went on. That progress culminated in a pole-to-flag victory for Red Bull at the season finale, amid whispers Mercedes were more than usually compromised that weekend as they were carrying development parts for 2021.

Ferrari, Mercedes’ closest rival on pure performance in 2019, made a huge step backwards at the beginning of 2020. This was largely attributed to changes to their power unit, which arose due to new regulations prompted by a controversial private settlement between the team and the FIA.

Ferrari’s aerodynamic platform was also found wanting, though how far this was a result of them not having the expected power output and therefore being unable to tolerate as much drag is a matter of some debate. They made some gains over the second half of the season, however, and the Maranello concern is hopeful their 2021 power unit will at least no longer be the slowest in F1, and they will be able to lead the midfield charge.

Racing Point – which has become Aston Martin this year – is a curious case. They made great strides over the winter having switched to an entirely different aerodynamic philosophy, inspired by that of Mercedes. However they made little progress over the course of the season, and became mired in an increasingly fierce midfield contest. Even AlphaTauri, who were over 1% slower than Racing Point at the start of the year, ended the season with a slightly quicker car on average.

Nonetheless, with Lawrence Stroll’s operation revitalising the team, 2020-spec Mercedes hardware available for this year, greater familiarity with the design philosophy and the arrival of four-times champion Sebastian Vettel, there’s great scope for progress at the rebranded team.

On average, Mercedes were 0.67% faster than their closest rival over the course of 2020. That compares closely with the peak of their dominance at the beginning of the V6 hybrid turbo era.

How much greater might their 2020 advantage have been had they kept up a normal development rate? And how much do they have up their sleeves for 2021?

They will be constrained by the ‘tokens’ system which limits how far teams can change their chassis for this final year under the current aerodynamic regulations. But, of course, the same goes for all their rivals as well.

The remaining unknown is what progress teams will make during the off-season. Here it’s useful to recall what happened last year, not in the expectation that history will repeat itself, but as a guide. The data above shows which teams made the biggest gains from the final five races of 2019 to the first five of last season.

During the last off-season all the Mercedes-powered teams made gains, as did Renault. Ferrari made the biggest step back by far, and their power unit woes dragged their customers back too.

But while Ferrari’s huge step backwards made headlines at the beginning of last year, Red Bull’s faltering start to 2020 drew less attention. Partly because it has become somewhat typical of the team in recent years. Will that change in 2021?

When the new season begins it’s hard to imagine a scenario other than Mercedes having the fastest car in F1 for the eighth year in a row. The competition tightened up over the course of last year, but Mercedes’ rivals will be wondering if the world champions are right now winning the invisible off-season war again.

55 comments on “Analysis: Mercedes’ 2020 dominance and their chances of being caught this year”