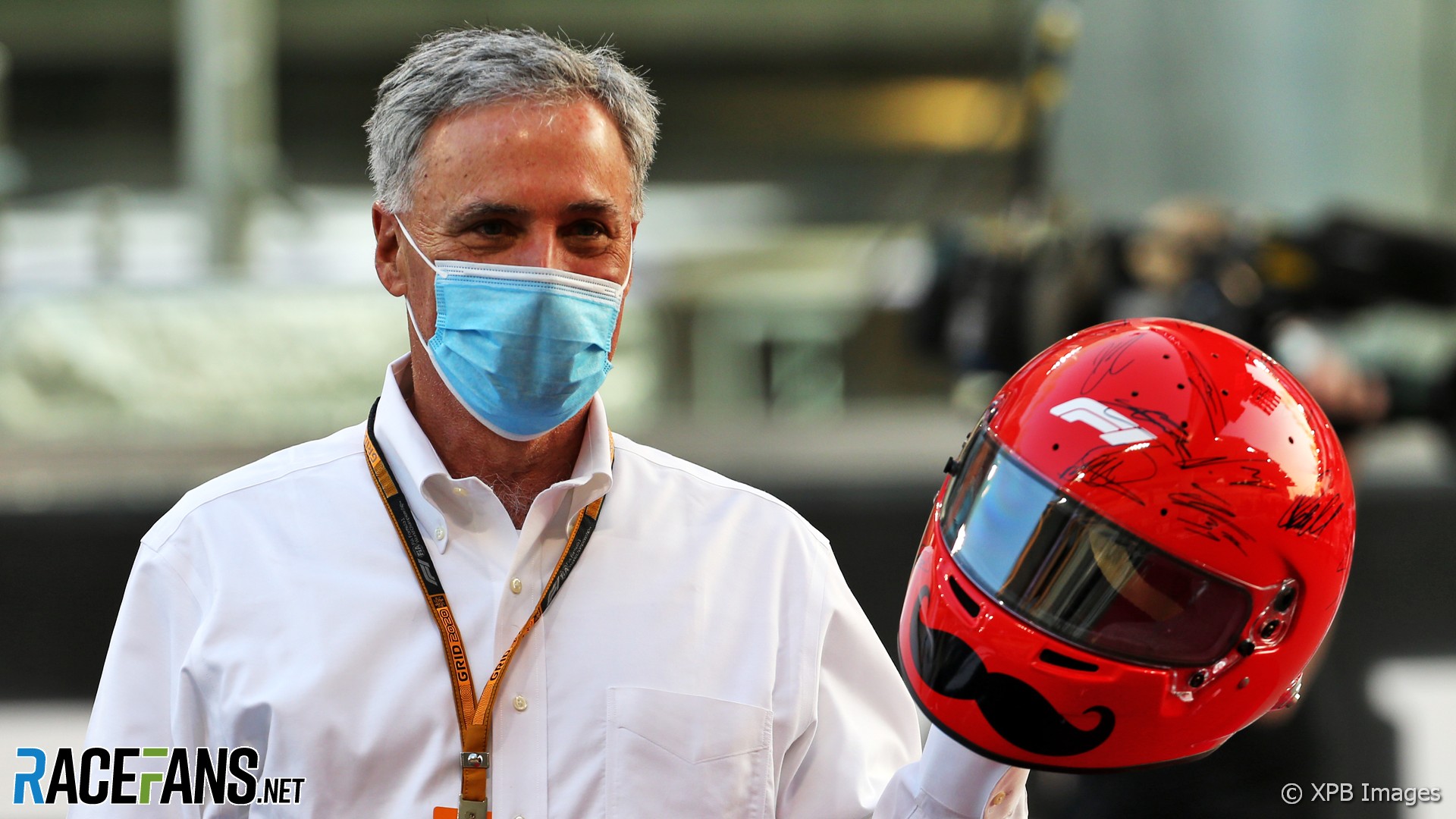 A season which, at one stage, looked like it might not happen at all came to a successful conclusion with its 17th race last weekend. Dieter Rencken brings his final Paddock Diary of 2020 from the Yas Marina circuit.

Abu Dhabi Grand Prix week starts with an airlift by Etihad Airlines from Bahrain to Abu Dhabi as part of a ‘Covid Corridor’ agreement between with the two states. The ‘bridge’ prevents the need for quarantine, provided personnel remain within a secure biosphere established on Yas Island, site of the final race.

All F1 personnel are tested at the airport upon arrival, then need to isolate in their respective hotels for 12 or so hours until their Covid results are received.

Bahrain was warm, efficient and welcoming; Abu Dhabi is the polar opposite. The biosphere provides a captive market for hoteliers, with food and accommodation prices being utterly ridiculous – up to 400% the standard rates despite no spectators being admitted to the race. 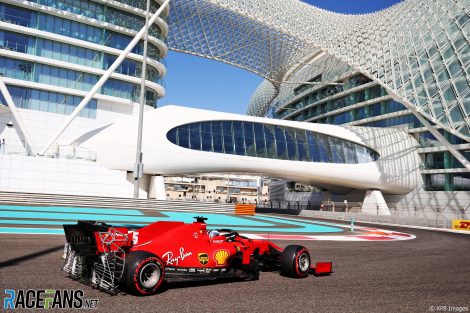 Out go paper menus and in come QR codes, meaning prices are hiked without the need for reprinting; the gouging is absolutely disgraceful and blatant: When I asked hotel management when food prices will revert to ‘normal’, I’m unashamedly told: “When the F1 ends [after testing] on Wednesday…”

Before being informed of the biosphere I’d booked four-star accommodation on the mainland for a quarter the rate of a three-star in the biosphere. Although the media was eventually offered a reduced rate it still panned out at double my internet booking. It is time circuits realised that we pay to report on their races, and the numbers need to add up.

As for hotel food quality: leathery hake and frizzled fries at 35 quid; eight bucks for a can of Coke. About the only favourable thing about the arrangement is that the hotels are within walking distance of the circuit.

I spend the day penning my weekly column on the pending Ferrari/Haas technical cooperation for 2022, as revealed here previously. It made me wonder which outfits will team up next. The end game will surely be five A-teams, each with a B-team in tow.

It’s not what F1 is all about, but the last time a stand-alone team from F1’s nether ranks won a grand prix was ‘Lotus’ with Kimi Raikkonen in the 2013 Australian Grand Prix. Since then, the only winners from outside of the major ranks are AlphaTauri and Racing Point, both of whom collaborate with ‘A’ teams – Red Bull and Mercedes respectively – and in both instances this year. Sad, but true.

I planned to relax by the pool while catching up on some reading, but as always in F1 something surfaces, in this case the Nikita Mazepin video.

Folk question why the FIA has not banned him rather than merely issuing a statement of condemnation. However, the act, disgusting as it is to most, occurred outside of the governing body’s jurisdiction and was not criminal. Thus, any sanction could potentially be overturned by a court of law. Billionaire boys can afford expensive lawyers.

With Yuki Tsunoda likely replacing Daniil Kvyat at AlphaTauri next year, Mazepin has arrived just in time to continue an almost unbroken run of Russian talent in the sport over the past decade.

The first, Vitaly Petrov (2010-12), was followed by Daniil Kvyat (2014-17), who was benched by Red Bull. Sergey Sirotkin filled the gap for a year (2018), and no sooner does the Williams driver lose out than Kvyat returns in 2019. After a two-year stint he leaves F1, and in comes Mazepin. Coincidence?

First proper day in the Abu Dhabi ‘office’, with the afternoon filled by Zoom conference calls. It’s a sad reflection on the state of F1 that so many talented drivers – Sergio Perez, Romain Grosjean, Kevin Magnussen, Kvyat and potentially Alex Albon – are out of F1 next year while a generation of pay drivers with bulging pockets appear. 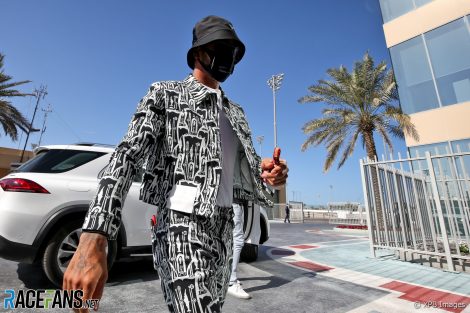 Over the years I’ve gotten on well with them all. True, we had prickly moments, but these are part of F1, and I’m sad to see them go. ‘KMag’ and I shared many a joke and his team mate was always ready with quotes. ‘Checo’s’ dogged determination in the heat of battle was masterful, while Daniil strung searing laps times together. Alex has always answered tough questions – and he’s had a few this year – most politely. Super-sub Nico Hulkenberg, too, deserves a seat and I hope they return soon – all of them.

In the early evening I receive news from a contact who has connections at the airport that Lewis Hamilton – who missed the previous race following a positive Covid-19 test – has landed following a private flight from Bahrain. The world champion had apparently tested negative and was ready to return. The information proves on the money. Again the chasm between ‘us and them’ became evident: We’d been warned that only folk who travelled within the airlift would be granted access to the biosphere.

I arrive at circuit at midday and head for a Covid test – hopefully the last of 2020. Where Bahrain’s procedure was quick and painless, Abu Dhabi’s is, you’ve guessed it: administratively slow, procedurally laborious and amongst the most painful – and I’ve had several rather uncomfortable tests. Possibly a medical expert can explain reasons for the differences because I simply don’t get it.

It emerges that McLaren has sold a 15% stake in its racing division to MSP Sports Capital, a Californian sports group that previously expressed interest in Force India and Williams. The investment group has an option to increase its holding to 33%, valuing McLaren Racing at £560m. Following a chat with the various principals I’ll reveal the full back story later this week. 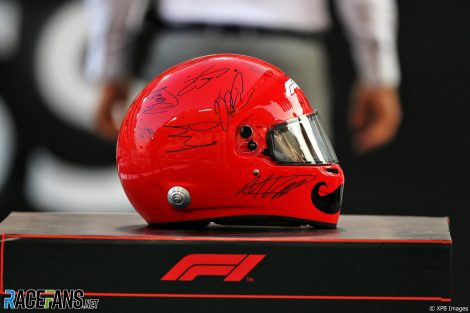 As I watch Hamilton and Max Verstappen present F1 CEO and chairman Chase Carey with a red helmet signed by all the drivers I reflect on his tenure since coming into F1 in 2017 as a rank outside, having not attended a grand prix before his appointment. Could Bernie Ecclestone have delivered 17 races under Covid, revamped F1’s complex revenues, completed a new Concorde Agreement and introduced three sets of regulations – including a budget cap – in under four years? I doubt it.

After the race I head for media sessions, but with a twist: As an experiment for next year the FIA permits drivers to enter a socially distanced ‘mix zone’ for face-to-face interviews. This has already enabled us to bring additional coverage your way. It’s still not what it was pre-Covid, but it’s surely a step in the right direction. 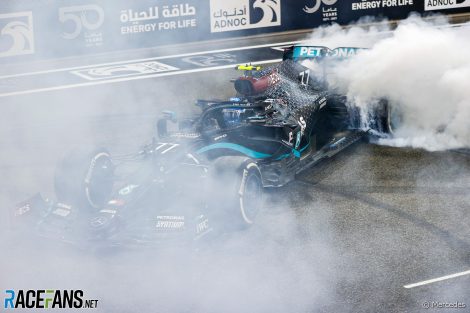 Depart for home from Dubai with Emirates. Even the 125 kilometre road journey, one I’ve done around 40 times in a rental car, is fraught with challenges. Only authorised cars are allowed into the biosphere so the only option is to book a (socially distanced) shuttle with three colleagues and pray our circuit-issued Covid certificates work at the Abu Dhabi/Dubai border. If you read this on Monday, they have.

The homeward flight marks the end of the weirdest season I’ve experienced since 1997, when I first started covering F1. It’s been a year of ups (more) and downs (many), but there are no doubts that F1 is stronger as a result. I managed to attend eight Covid grands prix – trips to Russia and Portimao were cancelled by airlines at short notice – and Keith two, making it 10 between us, which is 10 more than we imagined in the bleak days of March.

Next stop for F1 is testing on March 2nd-4th in Barcelona. Until then, have a great festive season and keep reading RaceFans!