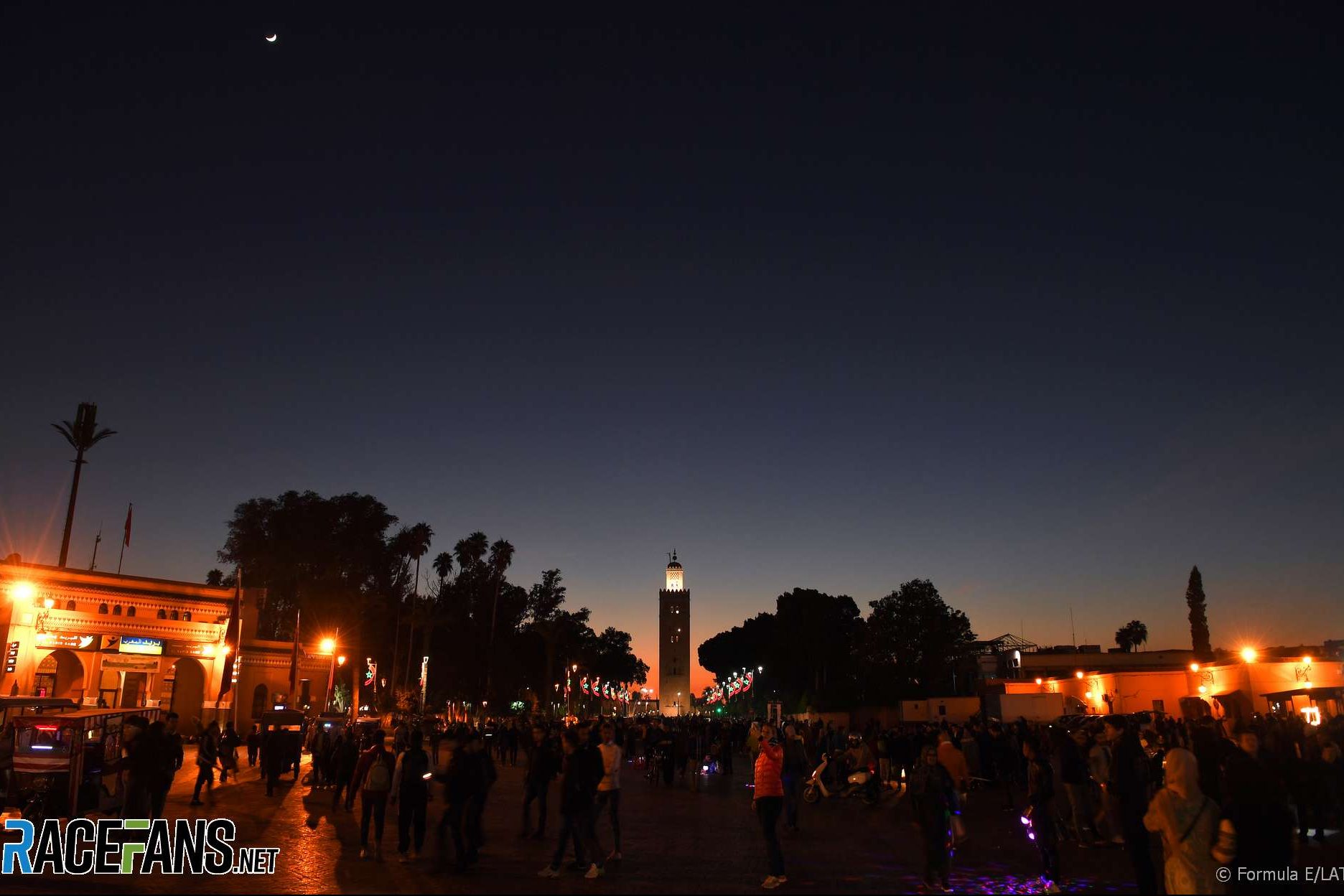 Max Verstappen isn’t the only Formula 1 paddock regular at this weekend’s Formula E race. Our special contributor @DieterRencken has also made the trip to Marrakech, from where he files his first Paddock Diary of 2019.

The 2019 motorsport season gets off to an early start for me. I depart home for Brussels Airport for a 10am flight to Marrakesh, venue for the second Formula E round of the 2018-19 season. It follows the opening race for the revised formula which took place in Saudi Arabia last month.

I’d been invited to Morocco by Formula E in order to gauge the progress made by the series with its new generation of cars. In addition, I have a to-do list planned, to form the backbone of an upcoming feature.

The flight is quick and painless, taking three hours from take-off to landing, with immigration proving a breeze. A driver collects me, and within an hour I’m checked-in my room at Kenzi Club Agdal Median, an upmarket resort situated a brisk five-minute walk from the paddock entrance. A bonus is my wonderful view across the snow-capped Atlas Mountains.

Unlike F1, nothing of consequence happens in FE on Thursdays, so I head for lunch – spicy lamb merguez sausage, grilled tuna steak and Mediterranean grilled veggies, followed by fruit and custard – before attending to emails and suchlike.

Catch cab to the Red House Restaurant in the city, where series title sponsor ABB hosts a typical Moroccan dinner for selected media. Strange to relate, but over Berber dinner – tender tagine-cooked chicken/lamb, complemented by Moroccan sweets – I catch-up with colleague Hazel Southwell, whom I hadn’t formally met as we cover different series and live in different countries.

The main discussion topic over dinner is the shocking driving standards of taxi drivers. During my return commutes I became convinced all my remaining birthdays would arrive at once, such were the close shaves. As we depart dinner ABB presents us with 1:43 scale model of the second-generation Formula E car, halo and all – a great addition to my collection.

Formula E thoughtfully delivered my pass to the hotel, so after omelette-on-toast breakfast and dark caffeine I head for the circuit, check into the media centre, then wander about. I’m amazed at the number of familiar faces about the paddock – racing folk who swapped the pressures and non-stop lifestyle in F1 for the more relaxed and open friendliness of the series. To a person they tell me they don’t regret it.

Opening interview of the day: Susie Wolff, former F1 test driver, now team principal of Venturi and wife of Toto, who I’d met a few times in the ‘other’ paddock. Without spilling beans, we discuss the budgetary gap between the independent teams and manufacturer outfits (sound familiar) for my feature. 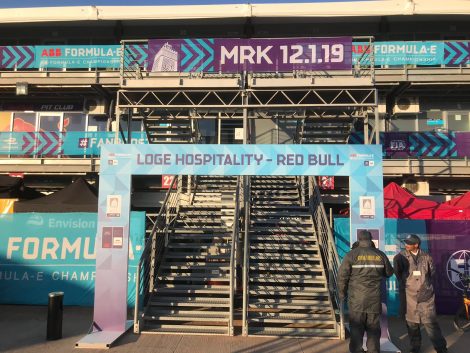 Next up is FE founder chairman/CEO Alejandro Agag, with whom I’ve always enjoyed an open relationship. The Spaniard originally granted me his first-ever FE interview back in 2012, and it’s always a pleasure to catch up the former European Parliament member and GP2 owner.

He reveals that FE recently acquired the former St Helena mail ship to provide a base for its nascent Extreme E series. The vessel will provide transport/HQ/accommodation for the five-leg marathon challenge, to be announced in London at the end of January, contested in inhospitable terrain using electric vehicles based on shared electric ‘skateboard’ chassis fitted with silhouette SUV shells. Rounds are planned for the North Pole, Amazon, Himalayas, a desert and a remote island.

Two FIA media sessions of three drivers each, with familiar faces being those of ex-Williams charge Sergey Sirotkin and Sauber tester Tatiana Calderon, both listed for Sunday’s ‘rookie’ test – make of that description what you will – then it’s off to the pen for individual interviews.

After lunch – I skip media centre fare in anticipation of dinner – I grill James Barclay, the South African-born team director/principal at Jaguar Racing. Then I catch up briefly with the team’s sporting director Gary Ekerold, an old mate from SA and son of 1980 350cc Moto GP world champion Jon.

Next I head for HWA Racelab, the de facto Mercedes FE team, for a chat with team boss Ulrich Fritz. I glean plenty of valuable material. 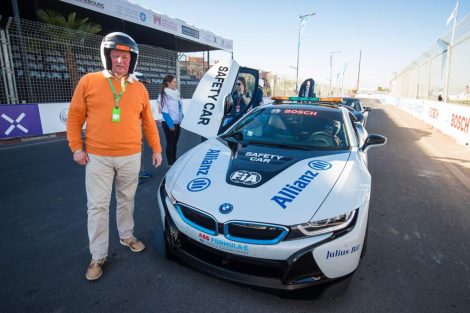 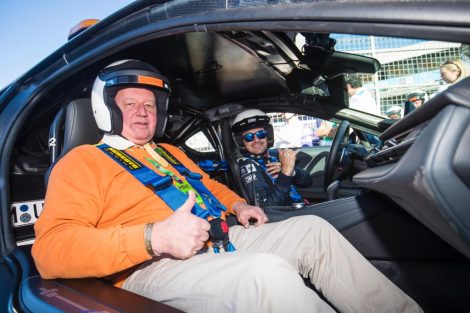 Next up, a hot lap of the Circuit International Automobile Moulay El Hassan with the BMW i8 Safety Car, driven by former touring car star, Bruno Correia.

During the lap, average around 100kph, I’m amazed by how much power the (admittedly uprated) 1500cc hybrid power unit delivers, and smooth surge of acceleration. Great lap, although I’m seated too far back to brace myself solidly against the floor under braking/cornering. Thanks to FE and Bruno – we’ll have video of the lap available soon.

I bump into former McLaren sporting director Eric Boullier, who confides he’ll soon announce a return to motorsport after a spell of contractually-obliged gardening leave, but makes clear hew’s had no shortage of offers.

I also cross paths with Cyril Abiteboul, who emerges from Nissan’s garage as though to prove the Renault-Nissan Alliance is alive and well despite the legal travails of boss man Carlos Ghosn. We discuss the situation, but understandably he’s guarded. 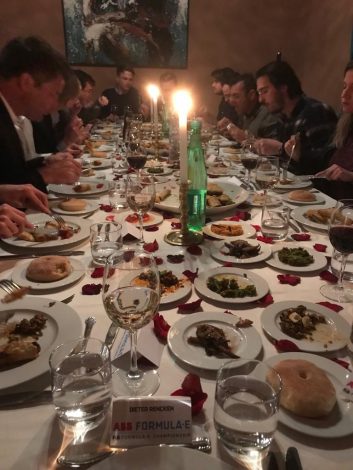 In conversation with Cyril I mention I’d heard Max Verstappen, with whom he’d oft exchanged words over the qualities of Renault’s F1 powrr unit, is expected in the FE paddock on Saturday. A frown. I explain Verstappen is due to serve his public service ‘sentence’ due to his physical altercation with Esteban Ocon in Brazil. A broad smile…

Depart circuit, head across the road, then prepare for FE’s Plug-In media dinner at Dar Zellij Riad, situated deep within ancient Marrakesh, and reached via a veritable maze of narrow hawker-packed alleys. We indulge in rooftop cocktails before proceeding to a private dining area for typical Berber fare – starters, and various tagine dishes. I can’t resist a double serving: tender lamb, then lemon chicken.

After superb food and much jollity its time to thread our way back via the maze and subsequent journey to base – en route we narrowly miss two cyclists, a couple of mopeds and force an oncoming bus to take avoiding action as our taxi driver determinedly proves he’s been overlooked for Saturday’s grid…

As I hit the pillow I hum the lyrics of Marrakesh Express by Crosby, Stills Nash and Young:

Formula E is kindly hosting Dieter for his visit to this weekend’s race.