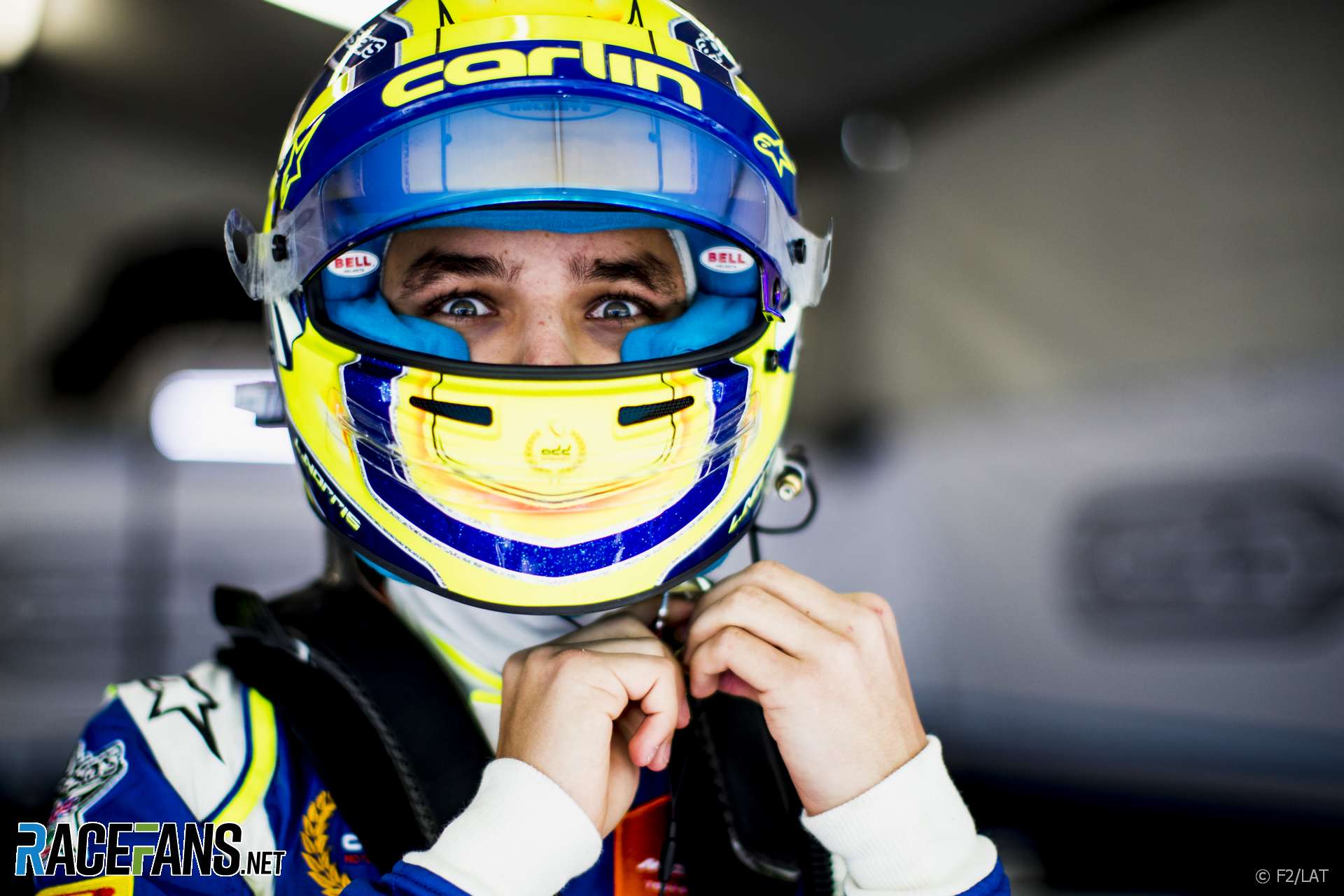 There’s no point denying the similarities are there, so let’s get the inevitable comparisons out of the way.

Next year Lando Norris will be the first British driver to make his debut for McLaren since Lewis Hamilton 12 years ago. And the two have more in common than just being British rookies joining Britain’s most famous F1 team.

Norris is arguably the most promising British talent since Hamilton, though he has emerged from a particularly strong crop of local rivals. In his one-lap speed, his superb touch in wet conditions and his flair for overtaking, Norris has demonstrated himself has fitting successor to Hamilton at McLaren.

But when it comes to their backgrounds and the circumstances of their debuts, the similarities go no further. Norris, wisely, has played down the chance of competing for wins in his first season as Hamilton did. The 2019 F1 season is unlikely to see McLaren restored to being the championship-contending force they were in 2007.

And they are cut from very different cloth. Hamilton’s rags-to-riches route from Stevenage to Monaco have been told many times: How Anthony Hamilton worked three jobs to keep his son in parts for his agricultural “four-poster bed” of a go-kart; the opportunistic introduction to McLaren chief Ron Dennis; the scintillating rise through single-seater racing that followed.

Norris’s background is completely different though, as he told me last week, he is largely unaware of the contrast. “I’m really bad at the history of Formula 1,” he admitted. “It’s easy for somebody from the outside to say what I’ve done different compared to him because I don’t know.”

While Hamilton was picked up by McLaren while he was still in karting, Norris only joined their junior programme two years ago. And while Hamilton’s family needed a benefactor like McLaren to keep him racing, that hasn’t been a concern for Norris. His father’s wealth, estimated at north of £200 million, has allowed his son and management team ADD, who came on board when he was still in cadet karts, to select the ideal championships (often more than one per season) as he ascended to F1.

So if Hamilton’s family circumstances were more like that of Esteban Ocon, who parents literally sold their house to keep him karting, Norris’s comparable reference point on the current grid would be Lance Stroll and his billionaire father Lawrence.

The current debate over Stroll being fitted for Ocon’s sear at Force India is a reminder that he has never been able to shake accusations his career trajectory is entirely down to his father’s backing, rather than merely facilitated by it. Is the same true of Norris, his success as European F3 champion? Is he just another Stroll who gets an easier ride from the anglophone F1 media due to his nationality?

It was clear from the reactions to the news of his promotion to McLaren last week that some view Norris as being all hype and no substance. This perception, which seems to be held by those who have only seen him racing in F2, is profoundly wrong.

I first saw Norris racing two years ago while I was commentating on the Formula Renault Eurocup. Those who’d seen him in karting had already advised me that neither money nor talent were in short supply. The latter point was immediately rammed home.

In a championship where second-year drivers normally vie for overall honours, the diminutive 15-year-old rookie stood out head and shoulders above his rivals. He left the opening triple-header at Motorland Aragon with two wins, one second place and a lead in the championship which he never relinquished.

It was one of three titles he won that year. Norris already had the Toyota Racing New Zealand Series title in his pocket and he doubled up in Formula Renault, winning the NEC series as well as the Eurocup.

He also did 11 out of 23 races in the then-MSA Formula Four (now British F3) series, scoring 247 points. This was good enough for eighth in the championship overall. Only one driver out-scored Norris during his spell in the championship, eventual champion Matheus Leist, who picked up 257.

In short, while Norris has undoubtedly had tremendous opportunities available to him, he has taken full advantage of them. The brief overlap between their spells in F3 provides an enlightening comparison.

In F3, Stroll had the benefit of a Prema team largely built around him and took two years to deliver the title. His 2016 success came against a significantly weakened and depleted field as few rival teams wanted to waste money going up against the Stroll/Prema juggernaut.

Among them was Carlin, who dropped out at mid-season, then returned for the final round so Norris could cut his teeth in the category. The wildcard entrant, in his first F3 weekend, out-qualified new champion Stroll for the final race of the year.

In 2017 Norris added the European F3 championship to the growing roster of titles he’s won first time out. But his F2 bid has not been up to his high standard. Though he won first time out in Bahrain, he hasn’t repeated the feat in the five months since then.

This has coincided with increased media attention thanks to racing on the F1 undercard and putting in convincing test performances for McLaren. With some in the British media nervously wondering where the next Hamilton is going to come from, the Norris hype machine has gone into overdrive just as his results on track have fallen slightly short.

Why has this happened? The spate of technical problems with the new generation F2 cars at the beginning of the year robbed Norris of some points, though the same is arguably true for some of his championship rivals to an even greater extent.

The greatest element appears to be that old bugbear for any driver moving into a FOM championship – the peculiarities of Pirelli’s high-degradation tyres, which require careful nurturing within a precise operating window to perform. With very limited practice time at each race weekend, drivers who are already familiar with the rubber, such as GP3 champion George Russell, are at an advantage.

A further complication for Norris in the last two races has been dovetailing his F2 duties with practice outings for McLaren. Driving the F1 car first thing on Friday before F2 practice has proved a distraction, a problem others in his have also discovered: Charles Leclerc was in the same situation in F2 last year, and George Russell has put further practice outings for Force India on hold for the same reason.

That won’t be a concern for Norris any more. While he will continue to make practice appearances for McLaren over the remaining races, he’ll skip those where he’s on F2 duty. McLaren has also ruled out the possibility of him making his grand prix debut before next year.

It promises to be a thrilling showdown between him and leader Russell, who is 22 points ahead with four races remaining. And Norris has made it clear he doesn’t want Russell spoiling his streak: “I don’t want it saying on my CV ‘win, win, win, win, win, loss, Formula 1…”

But whether he wins the title or not, Norris has a junior CV few drivers wouldn’t envy. The hype is real, but so is the talent. The question now is can McLaren give him a car to do something with it. Stoffel Vandoorne was the most dominant GP2 (now F2) champion when he won the title three years ago, but Norris will be in his place next year.