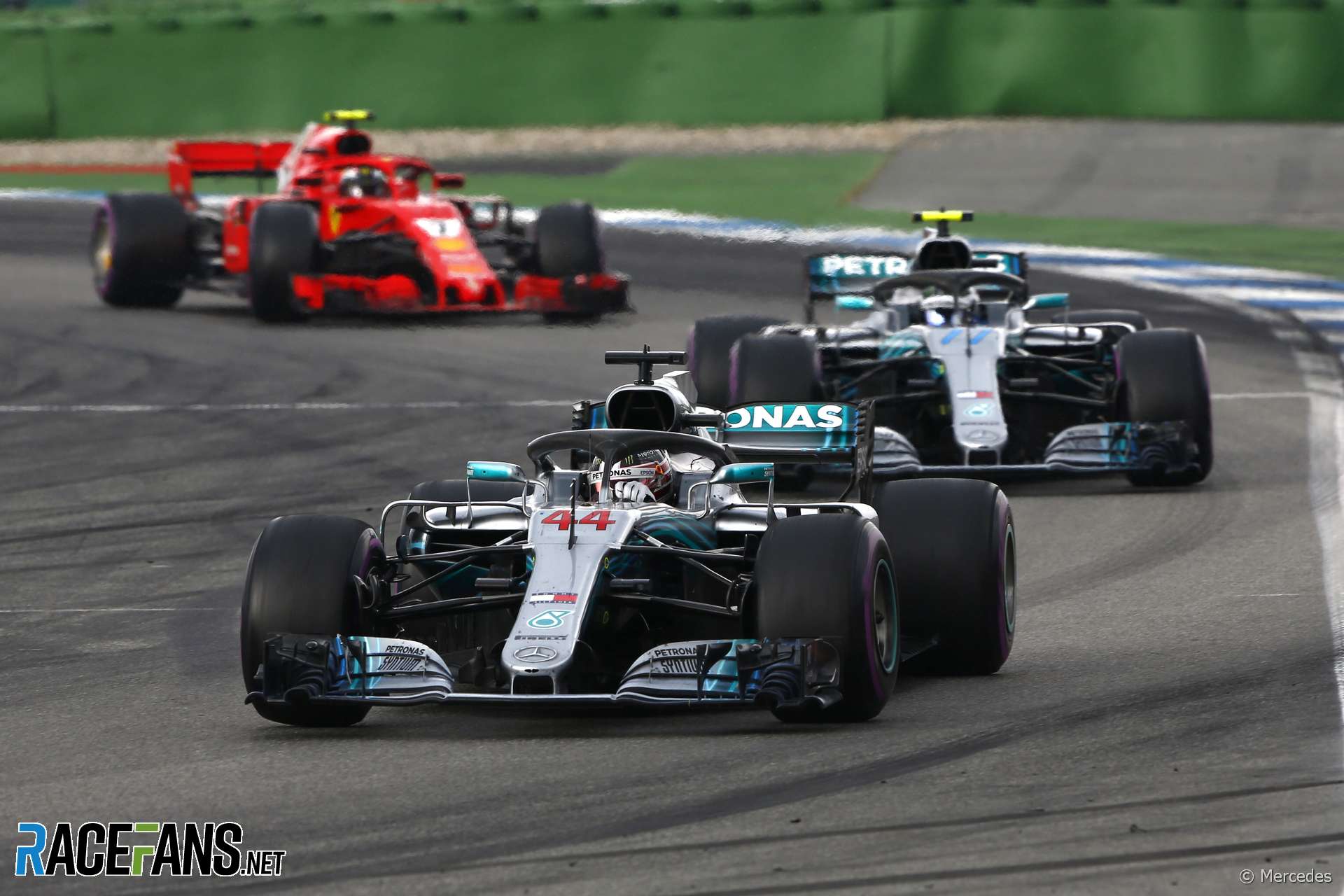 Lewis Hamilton says he would have won the German Grand Prix without Mercedes’ instruction for Valtteri Bottas to hold position behind him.

Hamilton and Bottas confirmed the order was given to him at turn 12 following the restart. The pair fought side-by-side through several corners earlier in the lap but Hamilton had drawn clear by turn 12.

“Valtteri had fresher tyres, they woke up a little bit quicker than mine, and it was fair game,” Hamilton explained. “He gave it a great shot, I think I positioned fortunately the car in the right place.”

“Afterwards when we were back in the meeting room Toto [Wolff, team principal] stood there and said ‘come over’ and Valtteri came over. Valtteri was like ‘it’s fine’, because by the time [Wolff] gave the order he said [Hamilton] had already pulled away. It wasn’t like [Wolff] told him while we were in battle.”

Earlier in the race Sebastian Vettel had been unable to get close to team mate Kimi Raikkonen despite the advantage of newer tyres. Hamilton said this showed Bottas was unlikely to get past.

“The fans of course they want to see us keep racing,” he said. “But I had pretty good pace that Sunday and if you look it’s not an easy track to overtake.

“Sebastian, who was quick in the first part of the race, wasn’t able to overtake Kimi. So that’s how it would have been pictured anyway if we were been left to fight it out until the end.”

Bottas said it was hard to predict whether he’d have been able to pass Hamilton.

“In all honesty, I think kind of the biggest of the battle was already there, at least, that lap, as it is very tricky to follow.

“We’re in similar cars, OK, there was a little bit of a tyre difference but the last sector is extremely difficult to follow and it is just unknown if I would have had any other opportunities or not.”

Hamilton said he understood the reason for the call but isn’t convinced it was necessary.

“When I spoke to Toto I understand his perspective: We’re at the German Grand Prix, all of a sudden we’re first and second. You’ve seen how other team mates cause trouble and lose points through silly mistakes.

“And whilst he’s got the utmost respect and trust in us, you see how passionate Toto is. He doesn’t want to lose what we’ve worked so hard to gain. And we were in a great position and he is like I want to keep it the way it is.”

“I don’t think at this point we need to have those kind of things,” Hamilton added. “But I think as a team, we are a team, we’re there to get those results so ultimately we do need to work together in certain scenarios.

“But I was quite happy with the battle we had. We were quite respectable in the space that we give each other. That space probably wouldn’t be there if he was racing against Ferrari or vice-versa.”