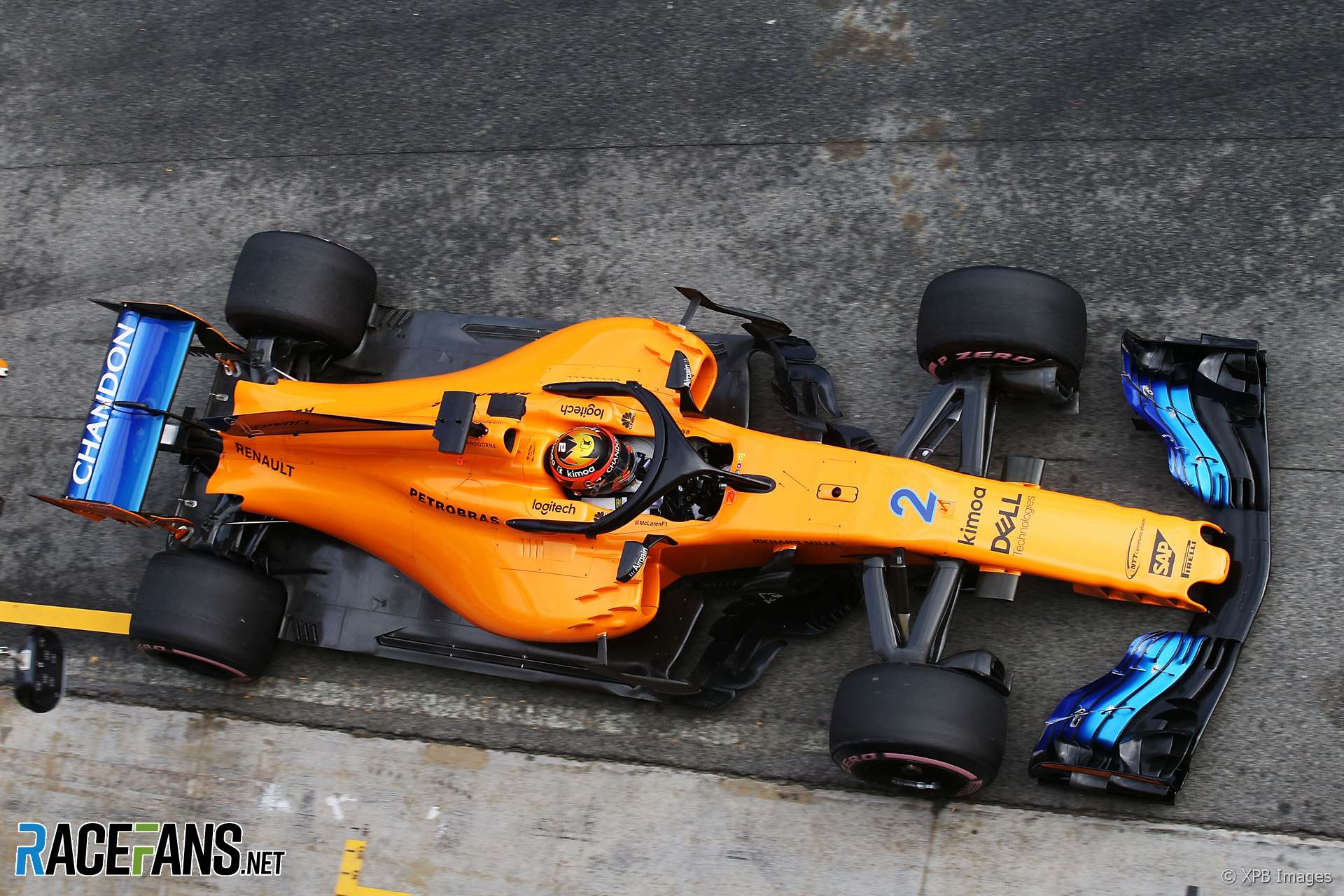 The McLaren MCL33 is the team’s first car to be powered by a Renault engine. It’s a change the team hope will make them more competitive and soon, though it meant a few compromises for their new car.

Work had begun on the MCL33 long before the switch of power units was announced. Describing the development procedure of the new car, technical director Tim Goss admitted “the disturbance of a significant engine change thrown in quite last-minute [has] probably been the main thing that has meant it’s been a little bit out of the ordinary this time round.”

Before the deal was confirmed McLaren’s technical team began laying the groundwork by scrutinising any pictures of the Renault they can lay their hands on. Power unit manufacturers and their teams guard the innovations on their hardware very closely, so this wasn’t always straightforward (whereas McLaren’s respect for its unloved Honda RS617H in late 2017 can be gauged by the fact it was often left uncovered).

“As soon as we knew it was happening then it was just everyone, all hands to the pumps,” said Goss. “The design team did a fantastic job of re-configuring the car to take the Renault engine.” This meant accommodating a substantially different philosophy of power unit design.

“You’ve got sort of two families of engines in Formula One at the moment,” Goss explained. “The Mercedes/Honda approach with the turbocharger split across the engine and compressor at the front, and the Renault/Ferrari approach where you’ve got the turbocharger in the back, so the compressor and turbine at the back and the MGU-H pushed forwards into the Vee.”

Both approaches “have pros and cons”, said Goss, which meant advantages and disadvantages for their chassis design.

“There are a few headaches with the Renault approach but I like the fact that because you haven’t got an intake coming down to the front of the engine you can push the engine further forwards and that helps packaging,” he said.

“But then you’ve got a compressor at the back of the engine, somehow you’ve got to get the outlet air from the compressor feed forward to the charge air coolers and you think it’s just something that’s in the way you’d rather not have it there.”

As to whether McLaren have moved from the ‘best’ engine layout, pioneered by the dominant team of the last four years, to a less successful one, Goss isn’t convinced. “The fact is if you look at the two fastest cars out there, a Mercedes and a Ferrari from last season both of which were championship contenders up until kind of mid-season or so, they’ve both got very different engine installations and very different approaches. So both of them can be just as successful.”

At first glance the MCL33 appears underdeveloped in comparison to its rivals. No Ferrari-like sidepods, nothing revolutionary regarding suspension or bargeboards. But study the papaya and blue skin closely and its superbly refined detail becomes apparent.

McLaren tend to be quite precise with their studio shots of the car, which means it is possible to compare geometrical changes from the previous year quite well. It seems they have increased the wheelbase slightly from the rear, which is done by lengthening the gearbox, making more use of their high rake angle setup.

The has indicated a new aerodynamic package will arrive at the first race of the year, so there are no surprise yet at this end of the car. The axle faces are open, suggesting that the team will continue to blow air through the brake ducts to aid the front wing’s job in pulling the tyre’s wake away from the bodywork behind. There is also an opening underneath the nose ahead of the front bulkhead, presumably for an S-duct.

McLaren hasn’t followed Mercedes/Toro Rosso in terms of front suspension design either, choosing to attach their upper wishbone directly to the upright rather than via a raised clevis.

We can expect the bargeboards to change slightly before the first race but their intricacy is certainly best viewed from above, featuring plenty of slots and fluted areas to carefully manage the air around the leading edge of the floor.

The sidepod area is where we can start to appreciate the new car, and where the lessons learnt from the ‘size zero’ philosophy during the Honda era have been applied. McLaren have managed to keep their tiny sidepod inlets and even reduce the size of the airbox, altered due to the Halo in front. So, unlike everyone else on the grid, all of their cooling is done through the sidepod intakes without sacrificing the tightly tapered Coke-bottle region.

No fewer than six vortex generators align the sidepod shoulder to guide airflow over the car, while pairs of elongated slots incised along the floor’s edge allow air above to migrate into the lower pressure area below, forming a vortex to seal the underside of the car off from turbulence.

There are also nice touches at the back, including the treatment of the rear upper wishbone which has been blended into one thick arm before dividing behind the bodywork to meet the gearbox case. Not a new idea but they are the first to do it with the rear upper control arm, tidying airflow up inside of the rear tyre.

The rear diffuser draws upon what the team ended with last year. A revised central section and fins stemming from the rear crash structure suggest better performance extraction from the airflow along the car centreline, no doubt aided by improvements to the surfaces upstream.

McLaren would not have taken the drastic step of forfeiting a works deal with Honda to become a customer team of Renault if they were not convinced the car they has built was not substantially better than the engine it was being powered by. However some rivals questioned whether the Honda really was so weak, and if its poor performance was exacerbated by McLaren running draggy, high-downforce set-ups which flattered the chassis.

“I don’t believe we did run high on drag,” said Goss of their approach last year. “We, like all the teams, do an aero scan [of] the wing levels and work out where you want to pitch yourself. And there is an optimum: You can shuffle yourself a little bit one way or other on the dip of the optimum and you’re not trading too much in terms of lap time. But generally pretty much every circuit we’re aiming for optimum minimum lap time and that would configure our car and what wing load we chose to take.”

“We obviously have GPS traces we can look at and interpret and make some analysis of where you think you are. I think in the main we had what appeared to be fairly good high-speed performance and I then there was work to do in the low-speed. I think that’s a fair reflection of where we were last year. But very difficult to break that down into engine and chassis.”

With Red Bull and Renault to benchmark themselves against now, that won’t be the case this year.