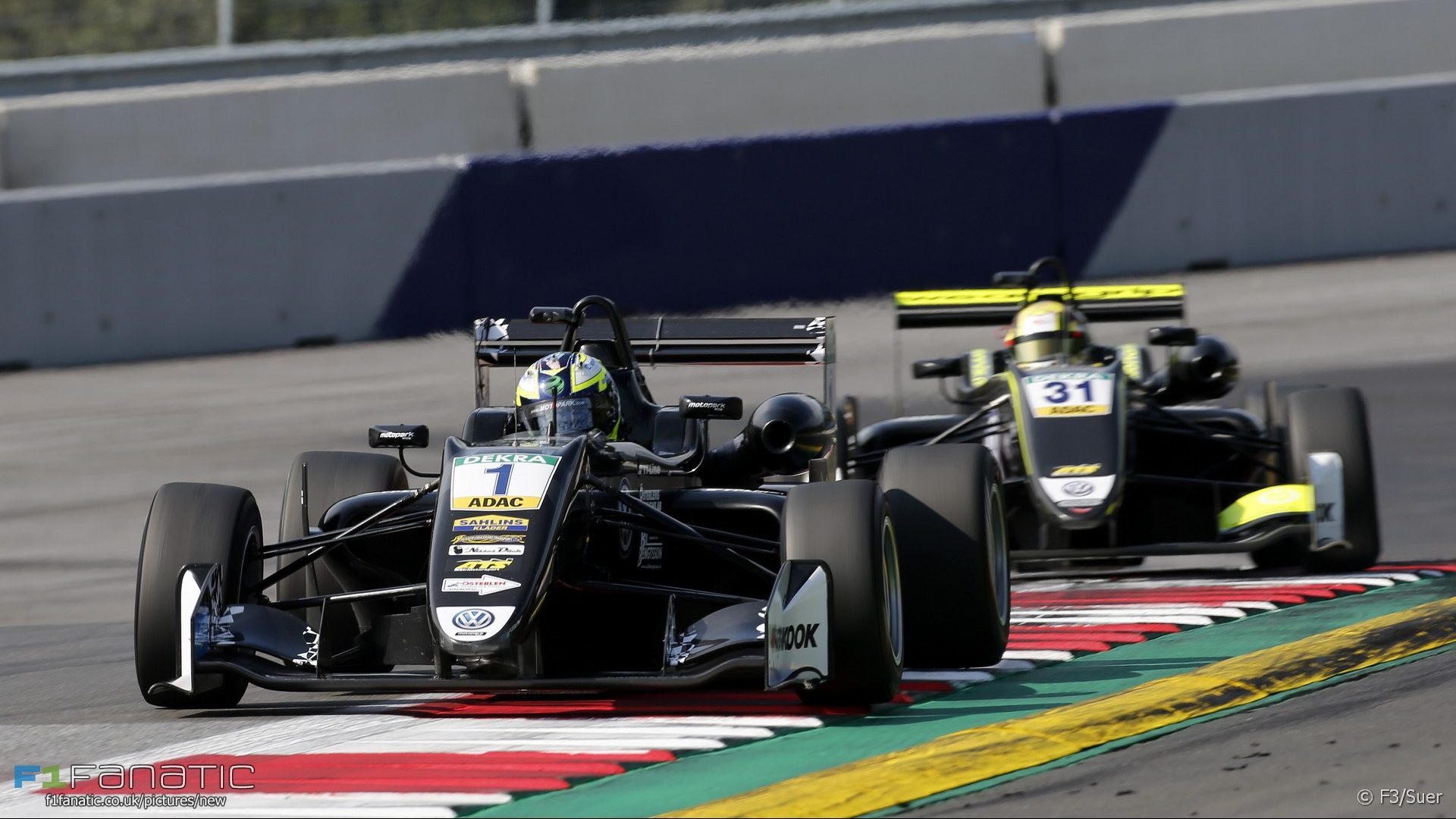 Meanwhile in Germany’s TCR series Jasmin Preisig survived a huge crash at the Hockenheimring. Catch up on last weekend’s highlights below.

Lando Norris was poised to clinch the European Formula Three title with three races to spare as the final lap began at the Red Bull Ring. But a mis-judged overtaking move by Ralf Aron (below) punted the Carlin driver into a gravel trap and put the champagne on ice until the season finale.

However Maximilian Gunther failed to capitalise on a rare win-less weekend for the championship leader. The Prema driver can only take the title if he wins all three races at the Hockenheimring and Norris scores less than three points.

The McLaren junior fell into Aron’s clutches after ripping off a front wing end plate while trying to pass Joel Eriksson for the lead. The latter went on to take his second consecutive win from pole position. Norris had followed him home in race two.

All three races at the Red Bull Ring were won from pole position. Callum Ilott did the honours in race one while Eriksson deprived Gunther with a gutsy move around the outside at turn one.

Gasly was unable to stay close enough to Sekiguchi to move ahead through the pit stops, despite staying out 15 laps longer than his rival. Gasly unleashed a string of personal best times in the closing stages, bringing him within a second with three laps remaining. The pair crossed the line separated by just 0.243 seconds at the chequered flag.

Gaslys third top-two in three races leaves him just half a point behind championship leader Hiroaki Ishiura. The title will be decided in a double-header weekend at Suzuka next month.

After the DTM’s sudden decision to scrap success ballast, Audi swept the podium at both races in Austria. Points leader Mattias Ekstrom won the first despite falling behind Jamie Green in the pit stops. Ekstrom had saved his DRS uses and a late dive saw him take the victory ahead of the pole man. Nico Muller completed the podium.

Audi repeated the feat in race two as Rene Rast took his third win of the season ahead of Mike Rockenfeller and Muller. Jamie Green – who had started on pole once again – led the race from the off but was cruelly denied less than two minutes before the end by a gearbox problem. Auer’s slim championship hopes took a further blow when he was knocked out of contention by Bruno Spengler. The title is likely to go to Ekstrom or Rast at the Hockenheimring.

The Europcup’s triple-header weekend at Spa-Francorchamps got off to a farcical start. Saturday morning fog meant race one consisted of four laps behind the Safety Car and no green flag running, despite which half points were awarded.

That was good news for pole sitter and championship leader Sacha Fenestraz who extended his advantage at the head of the standings. But it meant frustration for title rival Robert Shwartzman who started alongside him but was unable to challenge. The R-ace GP driver’s title hopes ended in race three following a collision with Richard Verschoor.

Gabriel Aubry out-dragged Fenestraz on the run to Les Combes to take the lead and the victory in race two. The Safety Car was deployed following a heavy crash for Gilles Magnus at Raidillon but Aubry maintained his advatnage despite fierce pressure from Fenestraz, who later lost second to Max Defourny.

Will Palmer followed Fenestraz home in race three and is now the only driver who can keep the Josef Kaufmann Racing man from clinching the title at the Circuit de Catalunya next month. Palmer has a deficit of 52.5 points with 75 available in Spain.

Kyle Busch and Martin Truex Jnr monopolised the lead of the race at New Hampshire but it was the pole sitter Busch who claimed victory. The result leaves Austin Dillon, Ryan Newman, Kurt Busch and Kasey Kahne in need of strong finishes at the next round in Dover in order to avoid being knocked out of championship contention.

Video not available yet.

TCR Germany held their season finale at the Hockenheimring with two races. Race one (above) was won by Hari Proczyk, his first of the season after electing to switch to the Opel Astra for the final round. Meanwhile Josh Files clinched his second TCR Germany title and his third in TCR competition with tenth place. Files capped his title win with victory in the second race ahead of Max Hofer and Niels Langeveld.

However, the biggest moment of the weekend was arguably an accident involving Jasmin Preisig and Jaap van Lagen, in which the former was pitched into the barriers, spun and struck another battier head on. It took 15 minutes to extract Preisig who was then airlifted to hospital for further checks. After an overnight stay in the hospital, she returned to the circuit relatively unscathed, albeit only as a spectator.

Marc Marquez opened up a 16 point championship lead on closest rival Andrea Dovizioso with victory at Aragon while the latter could only manage seventh. Jorge Lorenzo led the majority of the race but was deposed late on by both Honda riders, with Dani Pedrosa flying through the field in the final laps to claim second. Impressively Valentino Rossi finished fifth having started third, despite breaking his leg just 23 days earlier.

What racing action did you watch last weekend? Let us know in the comments.

Formula One heads to Malaysia next weekend and the following series are also in action:

Thanks to Robert Mathershaw (@mathers) for contributing to this article.