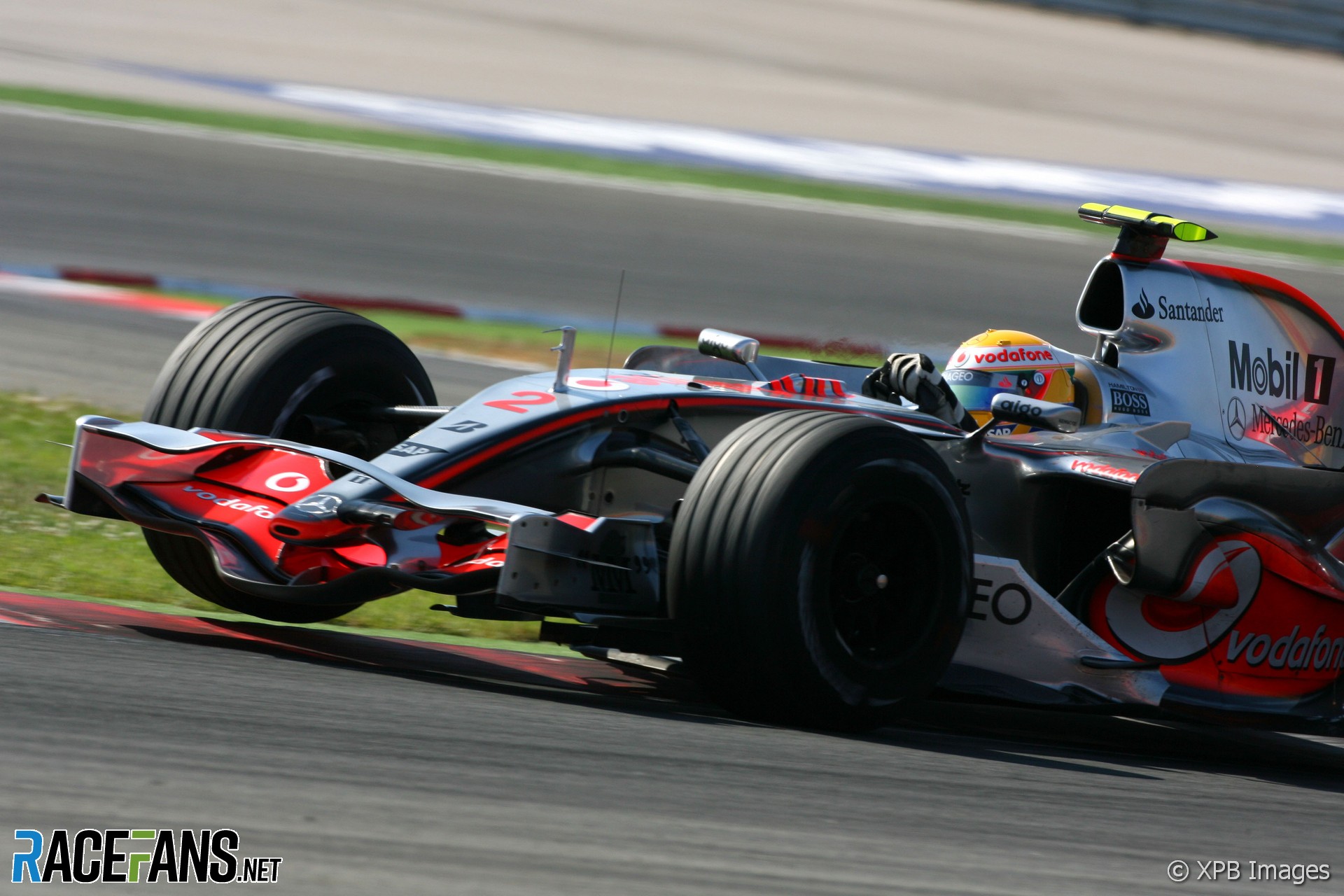 Lewis Hamilton’s third world championship victory on Sunday was the outcome of a passion for motor racing which was fired by his idolisation of Ayrton Senna and later on by Senna’s former team McLaren.

However before he even made it that far Hamilton’s unconventional route to F1 began in remote control car racing and was aided by a father who took three jobs to take his son from his humble roots all the way to the top of international motor racing.

In a sport thick with competitors from wealthy backgrounds and often aided by parents who were racers themselves, Hamilton stands out as a clear exception. He grew up on a council estate in Stevenage with his mother, who was divorced from Hamilton’s father Anthony, whose relationship with Lewis allowed his racing talent to blossom.

There is no doubt that without the support of his father Hamilton’s career would never have gotten off the ground in the first place. In many ways the archetypal ‘racing dad’, Anthony Hamilton’s competitive nature and his desire to see his son succeed all helped create the opportunity for Lewis to demonstrate his ability.

In contrast to most young drivers, who take their first step on the motorsport ladder in karts, Hamilton’s introduction to racing came in the form of remote controlled cars. Given an electric remote control car by his father when he was six years old, Hamilton’s enthusiasm quickly grew, and within months was competing against adults in championships using petrol-powered cars and even appearing on national television:

Soon the Hamiltons visited their local kart circuit, Rye House in Hoddesdon, to see if Lewis’s ability transferred to karts, too. It did, and that Christmas Hamilton received a kart of his own: it may have had many previous owners, but his father worked tirelessly to clean and fix it up.

Hamilton’s incredible natural talent, allayed with his father’s relentless championing of his cause, enabled him to quickly make waves in the karting scene, and by 1995, aged ten, Hamilton was a national champion in the Super One series. It was that success which gave him the opportunity to attend the Autosport Awards where he famously introduced himself to McLaren boss Ron Dennis.

Dennis jokingly replied he should come back and ask again when he turned 19 – but the pair crossed paths much sooner than that. The following year Hamilton won the McLaren-backed Champions of the Future kart series, and spoke again with Dennis at the season finale. The McLaren boss continued to keep a close eye on Hamilton as he progressed through the ranks.

In 1997, Hamilton moved to the Junior Yamaha series. It was interpreted by some as a sideways step, a much easier championship with fewer top drivers competing, and he took the championship with ease. But crucially, it was another McLaren-affiliated championship, and before the start of the following season Dennis offered Hamilton a place on McLaren-Mercedes’ fledgling young driver program. Their racing costs would now be completely covered – it is estimated that they amounted to £4 million over the following nine seasons.

A 13-year-old Hamilton duly stepped up in 1998 to the British JICA kart series. Racing against older and more experienced drivers – and now sporting the familiar number 44 – Hamilton still managed to finish second in the championship in his rookie season.

The following year, Hamilton made his first forays into an international series. Things were beginning to change in his life: aged 14, Hamilton’s racing was beginning to impact more on his education, and he was now taking more and more time off school to race in Europe. His father Anthony was also forced for the first time to hand over control of his son’s team.

In 1999, Hamilton competed in the Belgian and Italian kart championships, finishing fourth in both. It was in this year that he first came across future rivals Nico Rosberg and Robert Kubica.

The following season, Hamilton and Rosberg were paired together in a McLaren-Mercedes backed karting super-team. Competing in the European Championship together, Hamilton beat his future F1 team mate to the title.

Their team boss that year, Dino Chiesa, had some insightful comments on why it was that Hamilton had the edge over Rosberg: “It was Lewis’ fighting attitude”, he said, “he would take risks to win, risks that could mean he wouldn’t finish, whereas Nico would always have an eye on finishing the race.” Some 15 years later, some would say this assessment still rings true.

The 2001 season was Hamilton’s final season in karts. Progressing with Rosberg to the exacting discipline of Formula Super A, the 16-year-old suffered a win-less campaign – the only one of his career to date – hampered by a sub-standard engine that left him unable to compete at the front.

The next step for Hamilton was a move to car racing. With McLaren’s continued support, he moved to Formula Renault. His first racing team was Manor – the fore-runner of today’s F1 outfit, run then as now by John Booth.

Their relationship got off to an inauspicious start – Hamilton crashed on his third lap of his debut test – but he improved consistently over the course of the season en route to third in the standings. McLaren insisted that he stayed on for a second try in 2003, and he duly took the title with ease.

As soon as he had clinched the championship, Hamilton pulled out of the series and turned his attention to F3. His first impression on making his debut in the British series at Brands Hatch was positive: despite minimal prior experience in an F3 car he qualified seventh. He had in fact posted the fourth-fasted time, but that had been deleted as he’s crashed and brought out the red flags.

More incidents followed when the racing began: Hamilton went off in the first race, then suffered a huge crash in the second after tangling with team mate Tor Graves. Hamilton’s car went hard into the barriers at Clearways, he was knocked unconscious and taken to hospital for treatment.

Just a few weeks later Hamilton knocked himself out again in another F3 crash, this time at Oulton Park. Nonetheless Manor entered him for the prestigious end-of-season Macau Grand Prix.

He began the qualifying race from 18th on the grid, and from there the Macau rookie proceeded to give his rivals a lesson in overtaking. He took the chequered flag in fifth, which set his starting position for the final race.

The yellow helmet in the black car was ducking and weaving between the front runners as the main event got going, and he was in the process of passing a rival for third place when the other car hit the barrier, leaving him with a puncture:

Despite that promising start, Hamilton’s first full season of F3 competition in the Euroseries proved tough. He won just once, ending the year fifth in the championship. The real highlight of the season was his first test in an F1 car. Naturally this was a McLaren: Hamilton covered 21 laps of Silverstone in an MP4-19 as campaigned by the team that year.

His return to Macau was another case of what might have been. He started the final from pole position but lost the lead to Rosberg. His rival then out-braked himself at the first corner and Hamilton, who had also gone deep into the corner, ran into him:

The McLaren-Hamilton relationship came perilously close to fracturing at this point. Anthony Hamilton was eager for his son to continue ascending the ranks, and considered cutting ties with McLaren who wished to see Hamilton remain in F3. McLaren’s view prevailed, and the result was a season of utter dominance by Hamilton.

Remained in the F3 Euroseries, but moving to ASM who had just taken Jamie Green to the title, Hamilton won 15 of that year’s 20 races, and lost another at Spa to a technical infringement which several other drivers were also excluded for:

Now Hamilton was ready for the step up to GP2, and he was signed up by ASM’s sister outfit ART. He took his first victory at the Nurburgring, and followed it up with another in race two despite beginning from eighth place on the reversed grid. He was set to win again in the following race at Barcelona, but was tipped into a spin by his teammate Alexandre Premat on the final lap and limped home in second.

Further stunning victories came at Monaco and Silverstone – the latter including a pass on title rival Nelson Piquet Jnr and Clivio Piccone at Becketts – but it was at Istanbul Park where Hamilton truly announced himself as something special. A spin early in the feature race dropped him to 16th position, but Hamilton scythed his way through the field to a superb second place.

Hamilton took the title at the season finale at Monza two weeks later, and it was clear he was ready for the step up to F1. McLaren had seldom placed a rookie driver in their team straight away, but needing full-time replacements for both Kimi Raikkonen and Juan Pablo Montoya, and fearing a rival team might poach Hamilton if they didn’t race him, McLaren took the plunge.

In September 2006, Dennis informed Hamilton he would be a McLaren driver the following season. Despite his promise, expectations were limited: Hamilton would be expected to learn from his double world champion team mate Fernando Alonso.

Nine months later, as Hamilton took his breakthrough grand prix victory and the championship lead in only his sixth F1 race, those views were quickly being revised.