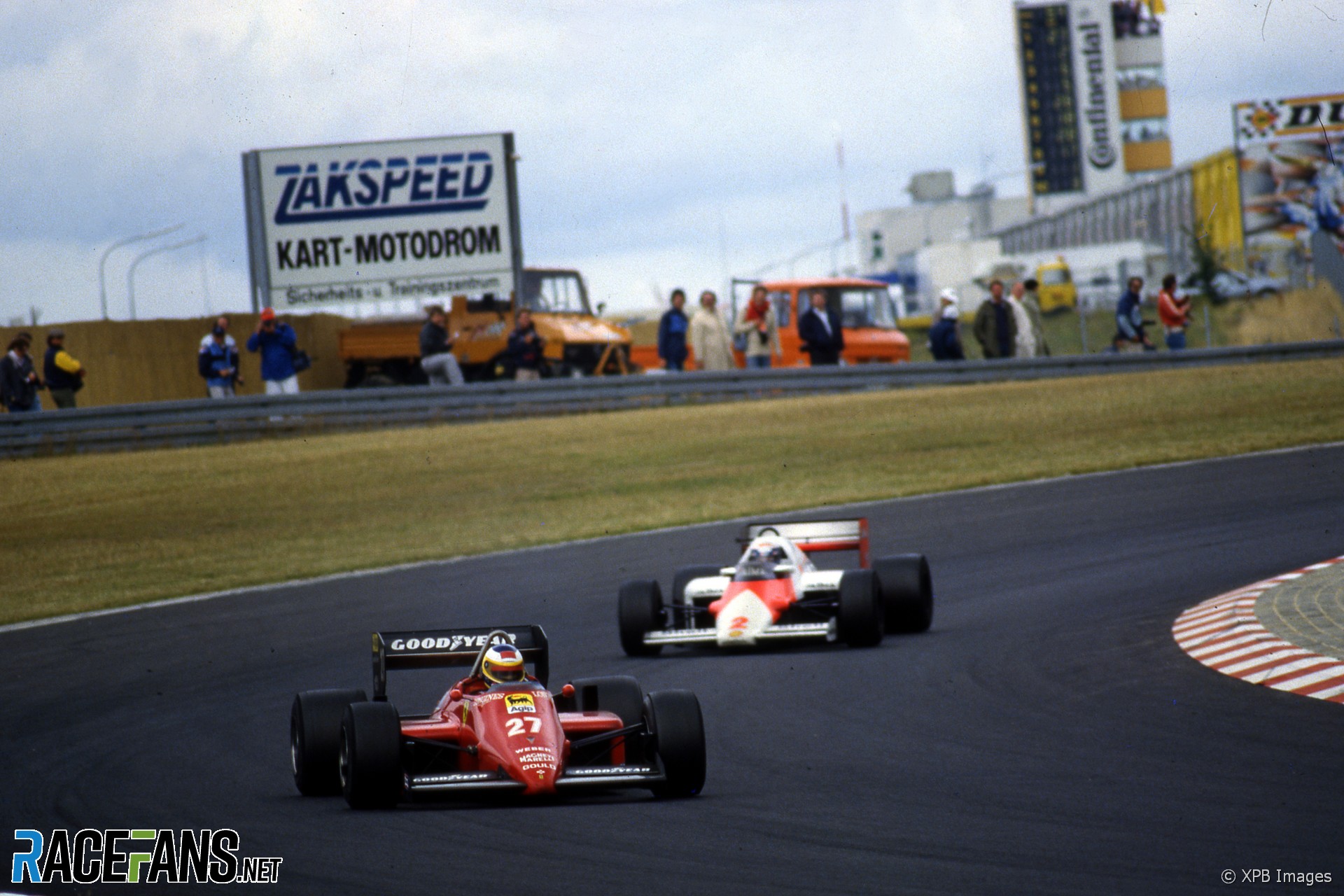 Italy is home to Formula One’s oldest and most successful team but its track record in producing world champion drivers is far less shining. Its last was Alberto Ascari with Ferrari 1953.

But 30 years it seemed as though Italy finally had another world champion on its hands – and one at the wheel of a Ferrari, no less.

Michele Alboreto’s victory in the German Grand Prix extended his championship lead as the 1985 season entered its closing stages.

“Sanitised”, “anaesthetised”, “bland”, “featureless”, “a shadow”, “pathetic”, “Mickey Mouse”, “forgettable”. If you think today’s F1 fans give new tracks a hard time on social media, journalists 30 years ago were no kinder to the ‘new’ Nurburgring.

The Nurburgring hadn’t held Germany’s round of the world championship since 1976, the notorious race which was already doomed to be the last on the Nordschleife even before Niki Lauda’s fiery, near-fatal accident. Since then the race had been held at the Hockenheimring.

In the meantime a new, shorter Nurburgring had been built. Smooth, wide and bordered by ample run-off, it pointed the way forward for grand prix circuit design. But it offended those for whom the Nurburgring title had always been associated with the narrow, sinuous, tree-lined giant of a track.

The new Nurburgring held its first world championship event the previous year as a second German round of the championship titled the European Grand Prix. Lauda had spun on his way to fourth place while team mate Alain Prost won, setting up a final round showdown where Lauda triumphed.

But his 1985 title defence had been shot to pieces by chronic unreliability, and ahead of round nine in Germany Lauda informed his McLaren team boss Ron Dennis that he did not intend to race beyond the end of the season. He waited until the next round to make his decision public.

Rain on Saturday meant the lap times from Friday’s qualifying session decided the grid – and produced a major shock.

Toleman, who had missed the first three races of the year, hadn’t started inside the front four rows all season and had only one car in the race. But it would start with all the others behind it, as an inspired lap by Teo Fabi put him over a second ahead of the best of the rest.

By coincidence Stefan Johansson’s Ferrari shared the front row. Johansson had been due to continue with Toleman who he had driven for at the end of 1984. However with their tyre supplier Michelin withdrawing over the winter and with both Goodyear and Pirelli unwilling to supply tyres, Toleman found themselves unable to race at the start of the year.

Only when they took over the Pirelli tyre contract for the defunct Spirit team were they able to join in. In a supreme irony, Toleman now gave Pirelli their first pole position for almost two years.

Ninth on the grid for Riccardo Patrese was his best qualifying position of the year so far, and it came after the Euroracing-run Alfa Romeo team had reverted to its 1984 chassis. It later transpired they were one of two manufacturer teams preparing to quit F1 at the end of 1985.

The others were Renault. But for this race they had an extra, third car on the grid. While regular drivers Derek Warwick and Patrick Tambay had the up-to-date RE60B chassis, Francois Hesnault had to make to with an upgraded RE60 which featured one further innovation – an onboard camera.

Renault had successfully gained the support of all the other teams to allow the grid to be expanded to 27 cars so they could run their extra car. While onboard cameras had been used in closed-cockpit racing for years, mounting them to open-cockpit F1 cars presented new challenges. Among which was how to keep the lens clean – Hesnault was under instruction to periodically pulls strips of clear film from the camera lens to ensure clear pictures were beamed back.

For his home race, Stefan Bellof had the use of Tyrrell’s only turbo-powered car. Ken Tyrrell had dropped his long-term opposition to running a turbo motor, but financial pressures and the fall-out over his team’s exclusion from the 1984 championship meant he was only able to obtain a single unit of year-old specification from Renault.

But Bellof’s 19th place on the grid was no better than he or Brundle had managed with either car. Clearly the turbo wasn’t the solution to their problems.

Fabi had crashed heavily during the wet qualifying session on Saturday, taking such a knock to the head that at one point he could not remember where he had qualified. And when he did take up his place at the head of the field his start couldn’t have been much worse.

The field was held for a long time on red, and as his car began to creep forward Fabi began to press the clutch in – just as the lights finally turned green. Johansson shot into the lead, but his car was stuttering on the up-shifts, so as they reached turn one it was Senna who headed the field with Rosberg in hot pursuit.

Alboreto had made a lightning getaway from eighth but as he arrived at the first corner his team mate was already turning in and the gap to avoid him was narrowing. “I thought, ‘Not Stefan, anybody but Stefan…'” he said afterwards.

The two Ferraris made contact, Alboreto’s front wing slicing his team mate’s right rear tyre, and condemning him to a slow limp back to the pits followed by a futile race at the back of the field. They weren’t the only team mates to collide at turn one: for once, crash magnet Andrea de Cesaris could point the finger at the other Ligier of Jacques Laffite for causing his early departure from proceedings.

Before the first lap was over Rosberg’s Honda-powered Williams had blasted him past Senna into the lead. Behind them came the title contenders – Alboreto followed by De Angelis and Prost. Piquet was next, though he was passed by Nigel Mansell on lap two, and Fabi had fallen to eighth.

Senna kept Rosberg’s FW10 within range, and as the pair began lapping the slower traffic the Lotus filled the Williams driver’s mirrors. On lap 14 Senna tested Rosberg’s defences at the hairpin, and the next time by he made a dive for the inside. Rosberg saw him coming at the last moment and left Senna just enough room to squeeze by into the lead.

This was the fifth race Senna had led since scoring his breakthrough victory at Estoril in the second round of the championship. But time and again his car his Lotus had let him down and today was to be no different. On lap 28 he raised his right arm and coasted into the pits, a driveshaft having failed on his car.

The same thing had happened to De Angelis in practice, and a different problem halted his pursuit of vital championship points. The oil pressure began to rise in his Renault V6 turbo, and on lap 41 it came to a smoky halt.

By this point in the race more than half of the starters had dropped out. Brabham’s involvement in the race ended when Piquet’s BMW turbo failed on lap 24. The last of the Renault trio dropped out two laps later – Hesnault’s clutch failed after nine laps, but not before he treated television viewers to the first live onboard camera footage from an F1 race, including an overtaking move on Jonathan Palmer’s Zakspeed.

The single Zakspeed retired from its home race on lap seven. The following lap saw both RAM drivers retire together on the approach to the Veedol chicane: Philippe Alliot lost oil pressure and Manfred Winkelhock’s final grand prix – he was killed in a World Sportscar race a week later – was ended by an engine failure.

Those at the head of the pack also had problems to grapple with. Alboreto’s Ferrari was smoking noticeably in right-handers – particularly the long turn before the pits – and Prost’s TAG-Porsche engine was lacking power. Even so they had closed on race leader Rosberg, presenting Alboreto with the tricky task of trying to pass him for the lead while not opening any doors for Prost.

The leaders were expecting to complete the race without a tyre stop, but Rosberg’s Goodyears were beginning to lose their adhesion. Heading into the fast Veedol chicane – which the front runners tackled flat-out in fifth gear in qualifying – Rosberg got off-line and rode the kerbs. Alboreto pounced, barging the Williams aside in the final corner, and the opportunistic Prost followed him through.

Rosberg pitted on lap 57, but was later forced to stop with fading brakes. Carbon fibre discs were in their infancy in 1985: Prost was another driver using them, but found his brake pedal beginning to go long. With ten laps he was pressuring Alboreto hard for the lead when his McLaren snapped into a spin at the final corner, forcing him to settle for second.

Mansell’s Williams held third but his lap times dropped off dramatically in the final laps as his Honda turbo lost boost pressure. He had Jacques Laffite filling his mirrors, and after holding the Ligier up to the tune of 20 seconds Laffite eventually slipped by to claim the final podium position. He lost further places to Thierry Boutsen and, on the final lap, Lauda, who had charged through the field after being forced to pit early due to a loose wheel.

Mansell collected the final point for sixth place followed by Gerhard Berger and Bellof. Brundle brought the normally aspirated Tyrrell home an unheralded tenth, three laps behind anyone else.

This turned out to be the final race finish for an engine from the Cosworth DFV/DFY lineage, which had been introduced 18 years earlier and won 155 races since. “I remember crossing the line in tenth and thinking what an amazing drive it was and nobody would ever recognise it or know it,” Brundle recalled recently.

Pierluigi Martini’s Minardi was classified 11th behind Brundle despite having stopped with a blown Motori Moderni engine. Nonetheless, this was the first official finish for the team in its debut season.

Wary of running low on fuel and dropping beneath the minimum weight limit following Prost’s exclusion from victory at Imola, Alboreto came to a stop immediately after taking the chequered flag. His victory extended his lead in the championship over Prost to five points – and made up for hitting Johansson at the start. But it marked the high-point of his 1985 title bid.

He finished behind Prost in the next two races and failed to score at all in the final five as the Ferrari reliability which had served him well in Germany deserted him when he really needed it.

But Ferrari were also struggling with a car whose performance varied wildly from track to track. Uneven surfaces were a particular weakness: the smooth Nurburgring presented few such problems, but at Zandvoort, Brands Hatch and Kyalami he qualified on the eighth row.

It was the beginning of a long, largely barren spell for Ferrari. Having won the constructors’ championship as recently as 1982 and 1983, they would not be regular championship contenders again for more than a decade.

Alboreto’s career suffered with them. This was his final grand prix victory, and after three win-less years with Ferrari he saw out his time in F1 with the likes of Tyrrell, Arrows, Lola and Minardi. He went on to win the Le Mans 24 Hours with Audi was killed while testing one of their sportscars at the Lausitzring in 2001.