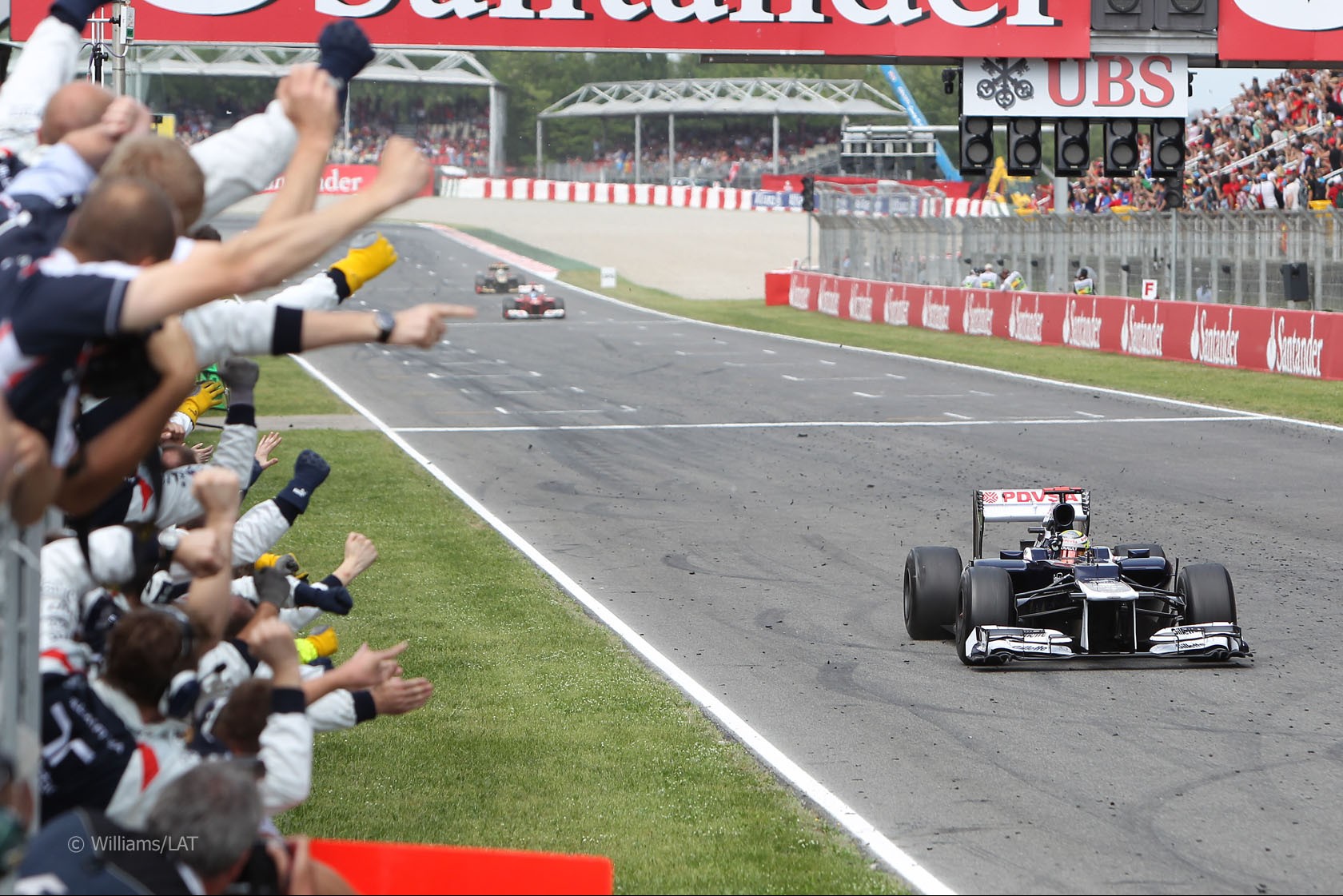 The surprise winner of the Spanish Grand Prix, Pastor Maldonado, was voted the Driver of the Weekend by the F1 Fanatic readers.

The Williams driver was followed by Lewis Hamilton, who recovered from starting last to finish eighth. He had less than half Maldonado’s votes tally.

Maldonado qualified second but was promoted to his first ever pole position when Hamilton received a penalty.

He lost the start to Alonso, but overtook the Ferrari driver in the pits. He came under considerable pressure from Alonso in the second half of the race, but held the lead to deliver his first ever win and the first for Williams since 2004.

Looked lively all weekend. Amazing qualifying lap, worked his strategy well and kept behind one of the best drivers on the grid. What more could you ask for?
DaveF1

Easily Pastor Maldonado, didn?óÔéĽÔäót make a single mistake all weekend. Brilliant qualifying, aggressive in the race when he needed to be, calm and composed when he needed his tires to last, while fending off two attacks from Alonso in the final stint. There were more good drives, but only one great one.
BS

Impossible not to give it to Maldonado on his maiden victory.

A near faultless drive, including substantial pressure from Alonso towards the end. Both were conserving tyres and aware of Raikkonen closing rapidly. This is a difficult balancing act to hold together, particularly with the vastly more experienced double world drivers’ champion Alonso closing in on younger tyres.
Cosicave

Hamilton looked to have set his third pole position of the year in qualifying, but was relegated to the back of the grid after his team stopped him on his return to the pits due to a fuel shortage in his car.

He responded with aggressive yet sensible driving picking up places and fighting his way through the field to finish in top ten, ahead of his struggling team mate. He was the only driver to run a two-stop strategy, suffering a delay in his first pit stop when a tyre was left in the path of his car.

I think starting from the back of the grid and finishing eight beating your team-mate who qualified tenth (after a penalty) is something special. And then go on a set of tyres for 30 laps and only going into the pits twice.

Not to take away from Pastor?óÔéĽÔäós win, but Hamilton is definitely a worthy runner up, if not driver of the day
Zubair

I voted for Hamilton. He was completely without peer on Saturday, and in spite of starting from the back through no fault of his own, he put his head down and put in a great race. He made the hard tyres work better ?óÔéĽÔÇŁ for longer ?óÔéĽÔÇŁ than any other driver, had some great overtakes, kept his nose clean, and altogether brought home more points than he should have been able to.
Hallard

Lewis Hamilton couldn?óÔéĽÔäót have been asked to do any more – took an excellent pole by half a second, but disqualified for a team error. Still, he put that behind him, and stormed through the field to beat Jenson Button easily, with good passes along the way, like on the Toro Rossos.

He didn?óÔéĽÔäót even lose his cool after the pit error in the race. He?óÔéĽÔäós got himself into the right frame of mind since the start of this season.
David-A

In an upgraded Ferrari, Alonso started the race from the first row for the first time this season. He took the lead when the lights went off, but lost it to Maldonado in the pit lane.

He looked like ready to fight for the win, but his tyres went off towards the end of the race and he found himself under pressure from Kimi Raikkonen at the end.

Alonso: again, as usual, completely dominated his team mate and wrung 100% out of the F2012. Great start, but questionable pit strategy probably cost him the lead to Maldonado.

Chased Pastor bravely during the final stint, but seemed to abuse his tires in vain trying to pass the Williams. All around great drive.
MylesW

2012 Driver of the Weekend results so far

Pastor Maldonado is a fifth different winner of the Driver of the Weekend poll this season. Alonso is the driver who is in the top three most frequently so far – the Ferrari driver is there for the third time.

12 comments on “Maldonado voted Spanish GP Driver of the Weekend”