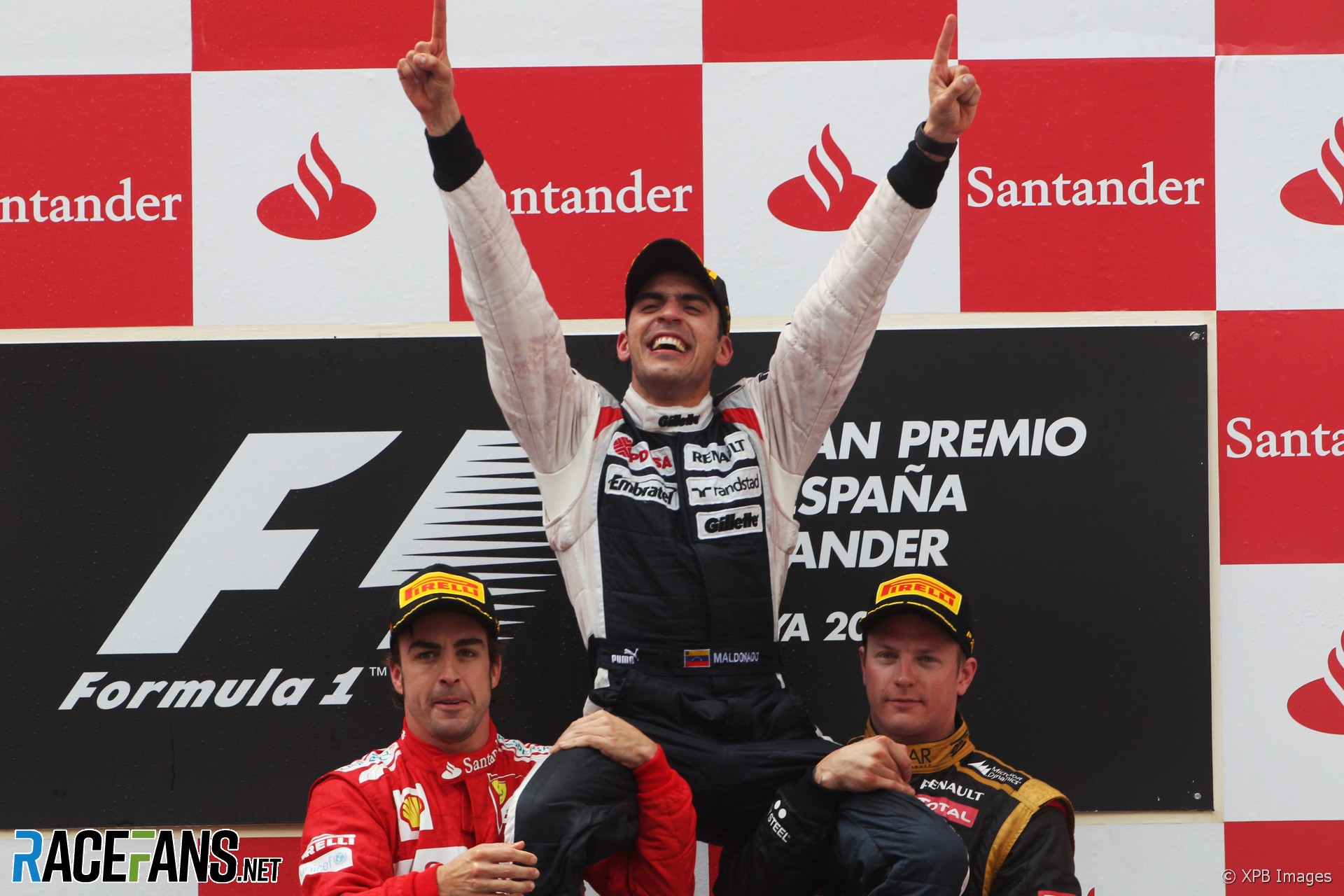 Pastor Maldonado made history by scoring his first F1 victory in the Spanish Grand Prix.

He ended an eight-year win drought for Williams, leading home Fernando Alonso who had been ahead for the first half of the race.

A charging Kimi Raikkonen reeled them in over the final laps and finished within striking distance of Alonso.

Having been handed pole position by Lewis Hamilton’s penalty the day before, Maldonado made a slightly slower start than fellow front row sitter Alonso.

He squeezed the Ferrari to the inside of the circuit, the Ferrari’s wheels touching the grass. But this was familiar territory for Alonso – he’d been in the same position last year, and neatly slotted past to take the lead.

Behind them Raikkonen moved up to third ahead of Nico Rosberg and Romain Grosjean. Sergio Perez, who had started fifth, picked up a puncture and skidded onto the run-off at turn four, the long trek back to the pits ruining his race.

Mark Webber had got away slowly and fallen behind the fast-starting Jean-Eric Vergne and Felipe Massa – the latter climbing five places from 16th. Unable to make progress, Webber repeated his tactic from China of making an early first pit stop.

He returned to the circuit having lost track position to the HRT of Narain Karthikeyan, who he almost ran into the back of at turn five.

Sebastian Vettel came in the next time by as the other front runners responded by pitting to avoid losing time and places.

Grosjean had been under pressure from Michael Schumacher but after they pitted Grosjean was quicker to pass the Williams of Bruno Senna, who was yet to pit.

Schumacher had a run on Senna at the first corner on lap 13, but misjudged the move and ran into the back of the Williams, putting both out. A fuming Schumacher branded Senna an “idiot” – the stewards said the incident would be investigated after the race.

The collision brought the yellow flags out which caused a problem for Vettel, who was found to have slowed down insufficiently and was handed a drive-through penalty.

Alonso retained the lead through the first round of pit stops but Maldonado closed in on him during the second stint. On lap 25 Williams were first to blink, pitting Maldonado first in an attempt to use the ‘undercut’ to get him ahead.

Maldonado’s out-lap was superb – covering the middle sector 1.3 seconds faster than Alonso had. Ferrari kept Alonso out despite him catching the driveshaft-troubled Marussia of Charles Pic to lap him.

Pic made way at turn one, Alonso gesturing angrily at the driver, who was later issued a penalty but never served it as his car problem became terminal.

Alonso’s lap 27 pit stop saw Maldonado easily take over the lead. Within two laps he had a seven second margin over the Ferrari.

Meanwhile Hamilton had made good progress having started last. By lap three he had passed Senna for 17th at turn seven, and in the following laps he picked off Kovalainen, Ricciardo and Hulkenberg – the latter running wide at Campsa.

He rose as high as fourth place during the first round of pit stops as the team edged towards a two-stop strategy, counter to the three stops being favoured by most. But the plan nearly went off the rails when he clipped his discarded left-rear tyre while exiting the pits, losing several seconds – another problem on pit lane for McLaren.

On his return to the pits he picked off Hulkenberg and Webber. Hamilton spent much of the remainder of the stint stuck behind Massa until the Ferrari driver was found guilty of the same infraction as Vettel and was also penalised.

His second and final pit stop came on lap 36. Despite needing to look after his tyres he lost no time passing the two Toro Rossos, squeezing past them in the first corners.

During the third stint Alonso gradually eroded Maldonado’s advantage. By lap 41 the gap was down to 4.1s. On the next lap Maldonado came in but a problem with his right-rear wheel delayed him.

Ferrari left Alonso out for three more laps, and he returned to the track three seconds behind the Williams. But now they had another problem: Raikkonen, who was yet to pit and now right in front of Maldonado.

The Lotus driver was also three-stopping. Raikkonen’s engineer told him Alonso and Maldonado were likely to make four stops, which turned out not to be the case.

First Maldonado, then Alonso picked off the Lotus on the pit straight. Raikkonen’s late final pit stop would bring him back into contention later on. After clearing Raikkonen, Alonso drew close enough to Maldonado to activate his DRS on the straight.

He wasn’t close enough to pass, and when they lapped Massa and Paul di Resta Maldonado took the opportunity to use his DRS and pull away from the Ferrari.

Alonso came back at him and closed to within six-tenths of a second of the Williams at one point. But just as he looked poised to strike the Ferrari began to slip back, Maldonado gaining time in the final sector of the lap and edging back out of DRS range.

Now Raikkonen was catching the pair of them – but the laps were ticking away too quickly for him to do anything about the leaders.

After 66 laps, Maldonado came home to win by 3.1 seconds, ending Williams’ eight-year wait for a Grand Prix victory. Raikkonen slashed 1.6 seconds out of Alonso’s advantage on the final tour, crossing the line six-tenths behind the Ferrari.

Grosjean and Kobayashi completed the top five, while Vettel recovered to sixth place, passing both McLarens and Rosberg as he recovered from his penalty. Hamilton was climbing over the back of Rosberg for seventh place at the end, team mate Button seven seconds in arrears.

Nico Hulkenberg was the final driver in the points, narrowly fending off Webber – both Red Bulls needing front wing replacements during the race.

The Toro Rosso pair of Vergne and Ricciardo finishing in front of di Resta and Massa. Kovalainen, Petrov, Glock and de la Rosa were the remaining finishers.

It should have been a day of unbridled joy for Williams, who scored their first Grand Prix victory since Juan Pablo Montoya won the Brazilian Grand Prix eight years ago. It came on the weekend Frank Williams celebrated his 70th birthday.

But their celebrations were marred by a serious fire which broke out in their pits a few hours later.