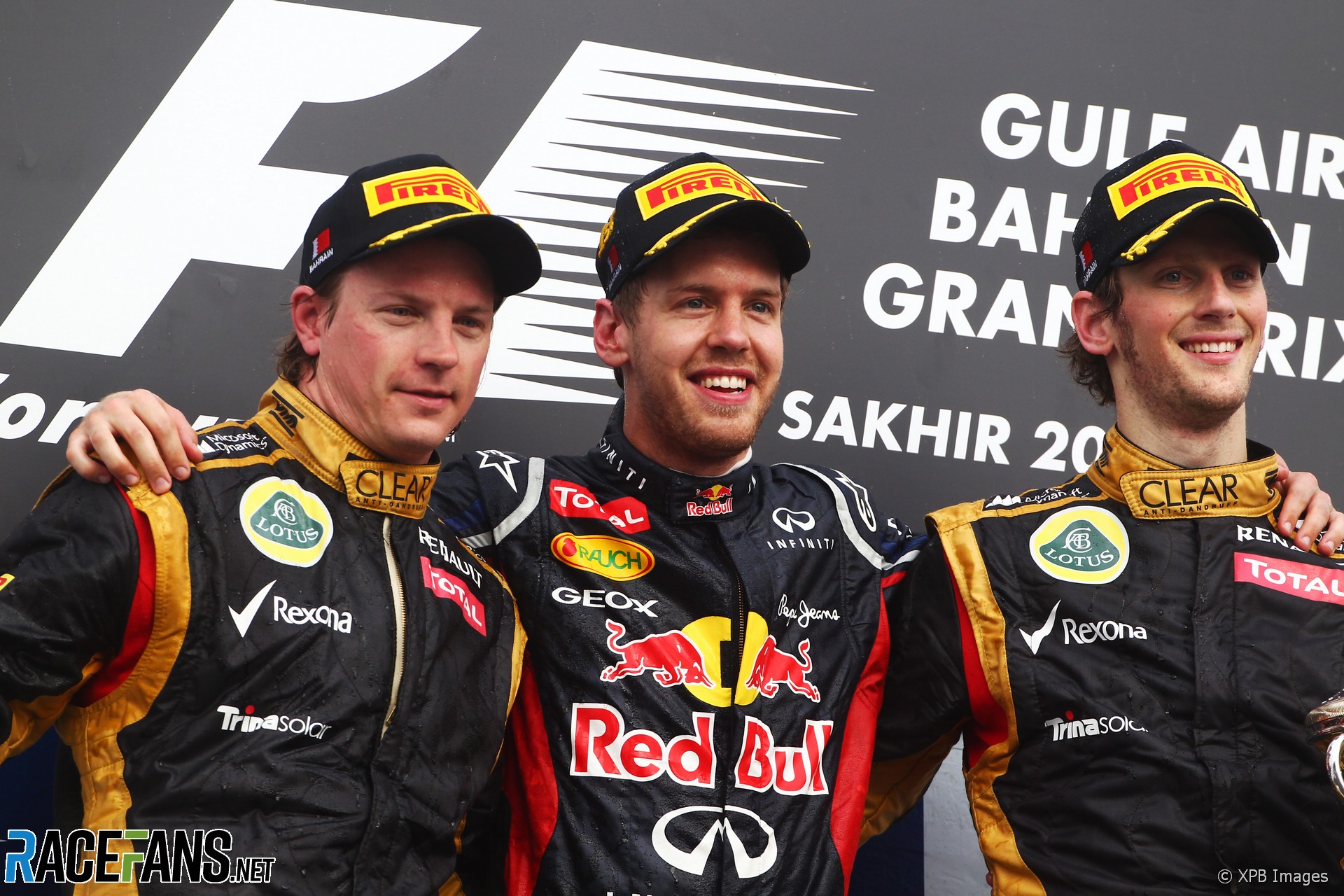 He came under brief pressure from Kimi Raikkonen in the middle part of the race, but eased ahead in the final stint to win by 3.3 seconds.

Romain Grosjean made it two Lotuses on the podium, taking third place.

Vettel’s start looked much like one of his 2011 getaways – he pulled effortlessly clear of the pack on the first lap.

Behind him Hamilton and Webber held their positions at the start, but Grosjean made a superb getaway to take up fourth behind the Red Bull.

It quickly became clear the Lotuses had strong pace. Grosjean passed Webber for third place then caught and passed Hamilton for second. But he couldn’t make much impression on Vettel, who was already almost five seconds ahead.

Meanwhile Raikkonen, who had slipped behind Felipe Massa at the start, re-passed the Ferrari and started to make progress of his own. He took a second per lap off the other Ferrari of Fernando Alonso, and passed him easily in the DRS zone.

Despite the cooler temperatures on race day, drivers found their tyres dropping off quickly. On lap eight Button radioed his pits and warned them his tyres had gone off – he came in at the end of the lap, accompanied by Massa and Rosberg.

Next time by the pits were packed with Hamilton, Webber, Alonso, Perez, Senna, Schumacher and Hulkenberg all making stops. Hamilton fell behind many of them as he suffered the first of two slow pit stops due to a problem at the left-rear of the car.

He emerged behind Rosberg’s Mercedes and tried to go up the inside of him heading to turn four. Despite being squeezed off the track, Hamilton kept his foot in and took the place.

Meanwhile Vettel was in the happy position of being able to pit after most of his pursuers – with one exception. Paul di Resta stayed out and led a lap before Vettel took the lead back.

Grosjean also passed the Force India shortly before Di Resta headed for the pits. The gap between him and Vettel remained little changed after the first pit stops, Grosjean now 5.2s behind Vettel.

Raikkonen emerges from the midfield

But Raikkonen was coming on strong. On lap 13 he got down the inside of Mark Webber at turn 11 for third place.

He now set about reducing the gap to his team mate, who was 2.9s up the road. By lap 21 the gap was down to a second and Raikkonen prepared to attack his team mate using DRS.

Grosjean held on for a couple of laps while Raikkonen urged his team to take action, telling them “I have to get past”. By lap 24 he was through, Grosjean not fighting him for the place at turn one.

The next time by Vettel came into the pits. Grosjean came in on the same lap but Red Bull’s turnaround was quick enough to have Vettel on his way again before the Lotus had come to a stop.

Raikkonen began making inroads on Vettel’s lead after he pitted. Over the course of the third stint he edged a tenth here, a tenth there, and cut Vettel’s lead from 2.2s on lap 27 to just a few tenths by lap 34.

On the next two laps Raikkonen attacked the Red Bull driver using DRS, but couldn’t get by. At the second time of asking Vettel made a late move to cover the inside of turn one, obliging Raikkonen to switch to the outside, from where he couldn’t make a move stick.

That was the closest Raikkonen came to wresting the lead from Vettel. From then on he slipped back slowly.

Hamilton’s second pit stop went more or less as badly as his first and left him outside of the top ten for several laps.

Meanwhile Alonso was the latest driver to come up against Rosberg, who repeated his robust defensive move on the approach to turn four. A furious Alonso criticised Rosberg on the radio afterwards, and the stewards declared they would investigate Rosberg’s driving against Hamilton and Alonso after the race.

He wasn’t the only frustrated driver. Di Resta had criticised Pastor Maldonado’s defensive moves earlier on, before taking advantage of the scrap between the Williams driver and Sergio Perez to pass the pair of them at turn four.

As di Resta gambled on making two pit stops while others preferred three, he came under pressure from those who had just pitted. Webber passed him easily for fourth place.

Maldonado, however, picked up a puncture and suffered a violent spin at the exit of turn three. He later retired.

Vettel and Raikkonen came in together on lap 40 for their final pit stop. They left in the same order.

As they returned to the track Vettel reeled off a new fastest lap and began to edge away. Raikkonen, perhaps remembering the degradation that dropped him from second to 14th in China, saw the RB8 draw further ahead with each passing lap.

Raikkonen’s engineer told him Vettel would have worse tyre degradation but it didn’t come to pass. However, Red Bull were cutting it fine on fuel.

As Vettel crossed the line to win, he was instructed to pull over and stop immediately. He won by 3.3 seconds, Raikkonen followed home by team mate Grosjean.

Webber continued his run of finishing fourth in every race this year. Rosberg made a late pass on di Resta to claim fifth.

As di Resta coaxed his tyres to the end he came under pressure from Alonso – which he resisted. “The tyres were gone at the end” he told his team after finishing sixth.

He might have had a more difficult time had Jenson Button not hit trouble late in the race. He had to make a pit stop with a puncture and shortly afterwards an apparent engine problem forced his retirement.

That left Alonso seventh ahead of Hamilton, who was left to rue McLaren’s disastrous performance in the pits.

Massa picked up his first points of the season with ninth place, while Michael Schumacher took a single point for tenth.

Sauber failed to score points as Sergio Perez and Kamui Kobayashi came home 11th and 13th – the latter abandoning his attempt to finish the race with two pit stops. Nico Hulkenberg finished between the pair.

Daniel Ricciardo plummeted down the order after starting sixth. He ended the first lap behind team mate Jean-Eric Vergne – who had lined up 17th – and concerned about front wing damage.

The Toro Rosso pair finished in that order, Vergne 14th ahead of Ricciardo.

Vitaly Petrov led home team mate Heikki Kovalainen who picked up a puncture on the first lap. Glock, de la Rosa and Karthikeyan were the remaining finishers, with Button and Senna classified despite having stopped.

A race to forget

The Bahrain Grand Prix is history for this year. The annals of motor racing will remember Sebastian Vettel as its winner.

But this weekend the sport was a sideshow. Formula 1 allowed those with a political agenda to exploit it, and brought shame on itself by holding this race.