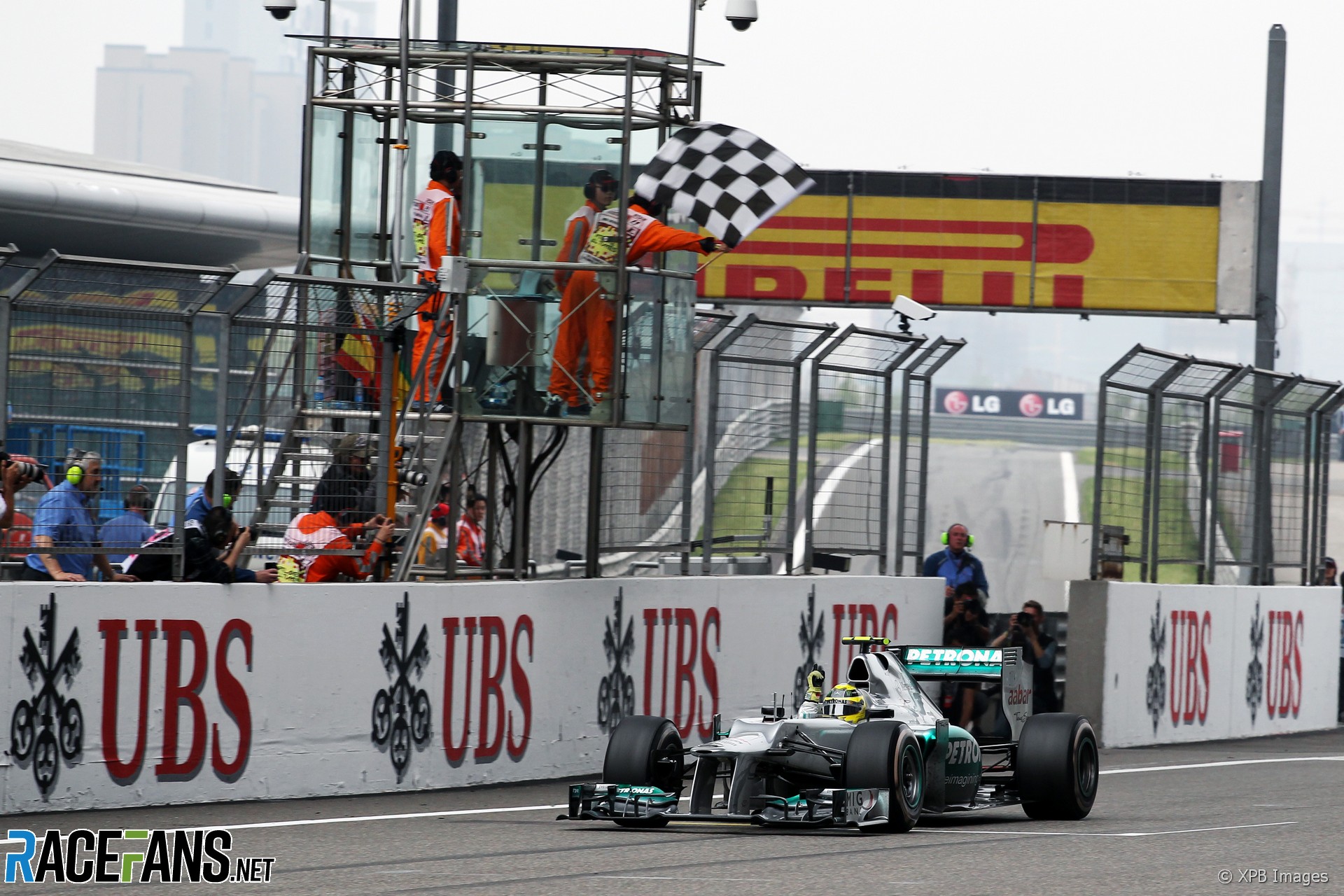 The Mercedes driver finished more than 20 seconds ahead of Jenson Button.

The pair ran different strategies during the race but a slow pit stop for Button tipped the race in Rosberg’s favour.

Behind him the McLaren drivers came out on top of a fierce scrap for the final two podium positions.

Rosberg made an immaculate start, showing a clean pair of heels to Michael Schumacher who held onto second.

While Kamui Kobayashi went backwards from third place, Button came through from fifth to take up the running behind the Mercedes drivers, ahead of Kimi Raikkonen.

Lewis Hamilton dived past Kobayashi at turn six and Sergio Perez took the opportunity to demote his team mate as well.

Mark Webber slipped back at the start and was passed by Fernando Alonso. By the end of the lap they had already passed and re-passed each other again, leaving Webber tenth.

Rosberg made his escape in the opening laps, pulling out a lead of almost three seconds over his team mate. Schumacher’s slower pace did not seem to be a case of Mercedes tactics to give Rosberg a bigger lead – behind him, Button was struggling to get within range to use DRS against the Mercedes.

Webber made an early pit stop at this time, in an attempt to recover some of the places he lost at the start. He switched to the medium tyres and fell to 20th place, but was immediately the quickest driver on the track.

What’s more, even as he got stuck into passing the battling Vitaly Petrov and Jean-Eric Vergne, he was still able to match Rosberg’s pace and take time out of the cars he had been racing.

That forced several others to pit to keep Webber behind. Hamilton followed Raikkonen in on lap 11, and led him out of the pits after speedy work by the McLaren pit crew. It also kept him ahead of Webber, who passed Raikkonen as they rejoined the track.

Button and Grosjean came in the next time by – the McLaren driver asking for more front wing on his first visit.

Schumacher pitted from second on lap 13 but as he pulled out of the pit box a mechanic on his right-front wheel was signalling furiously for the car to be held. The wheel hadn’t been fixed properly, and Schumacher came to a halt shortly after rejoining the track.

While one Mercedes was stopping for good, the other came to a temporary halt – Rosberg made his first pit stop, handing the lead to Perez. Mercedes had suffered heavy tyre degradation on Friday so they inspected Rosberg’s tyres closely after his first pit stop, and told him one of his rears had been close to wearing out.

Perez’s pit stop did not go to plan – he crept away slowly and lost places to Kobayashi and Grosjean.

This briefly handed the lead to Massa but Rosberg caught him before the end of the lap and, with DRS open, motored past easily on the back straight to resume the lead.

The McLaren drivers took up second and third places, Button 4.7 seconds behind the leader with a 1.7s margin over his team mate. But not for long: fourth-placed Webber made for the pits on lap 22, and Hamilton and Button followed in the next laps. This second round of stops left them with more passing work to do. Button quickly picked off Pastor Maldonado and Perez using DRS.

Hamilton was more circumspect in his attempts to pass Massa – perhaps wisely given their altercations last year. He thought better of a move at turn one, and waited until the hairpin turn six before squeezing down the inside of the Ferrari.

Button was able to quickly pass cars on the straight and still gain time on Rosberg, reducing his advantage from 21.8s to 20.2. But Hamilton lost time behind Perez, and the gap between him and Button grew to 5.7s.

Once he hit clear air, Button took huge chunks out of Rosberg’s lead – as much as two seconds on lap 34, cutting the gap between them to 12.3 seconds. That finally pressed Rosberg into making his second pit stop, although his team noted his left-rear tyre still had some life left in it – an encouraging sign which was quickly relayed to him.

The battle for the lead had echoes of last year’s contest between Hamilton and Vettel. Button needed to make a third pit stop which would drop him behind Rosberg – but with a faster car for the final stint that could allow him to make a pass for the lead.

However Button’s third pit stop on lap 40 dealt a blow that cost him a shot at victory. The left-rear wheel was slow to go on, and while McLaren avoided Mercedes’ mistake of sending the car out too soon, it cost him precious time.

Worse, it left Button mired in the middle of a string of cars disputing second place. He took up fifth behind Massa, Raikkonen and Vettel, with Grosjean, Webber and Senna behind him.

“There’s still plenty of points to play for,” Button’s race engineer reminded him. “We need to overtake at least Vettel, the rest will probably pit.”

Massa duly came in shortly afterwards but Raikkonen tried to hang on to his tyres. It was a gamble that didn’t pay off: the returning world champion learning the hard way that there’s only so long a worn set of Pirellis can be persuaded to cling to the tarmac.

Vettel and Button made it past the increasingly lairy Lotus. But Webber – who had already had a dramatic moment at turn 13, taking to the air on the run-off – ran wide at turn eight. That allowed Hamilton past, and he went on to take Raikkonen at the hairpin.

Raikkonen continued to go backwards, Grosjean and Alonso were the next to demote him. Grosjean then took sixth place off the Williams of Bruno Senna. With five laps to go, Button was within range of Vettel and made a tentative – but successful – move at the hairpin to take second place. Two laps later Hamilton claimed the final podium place off the Red Bull.

“We had absolutely no straight line speed the whole race,” fumed Vettel afterwards. But his team mate seemed to – Webber took fourth place after attacking Vettel at the hairpin and getting a quicker run out of the corner into turn 16.

Button set his fastest lap on the final tour but it was far too late to do anything about Rosberg, who duly took his first F1 win having led most of the way.

Hamilton claimed his third consecutive third place and with it took the lead of the drivers’ championship, by a scant two points over his team mate.

Grosjean scored his first F1 points with sixth behind the Red Bulls. Senna was seventh, despite having damaged his front wing on the rear of Massa’s car at the first corner.

The other Williams of Pastor Maldonado claimed eighth. Alonso came in ninth after losing time by running off the circuit trying to pass Maldonado on the outside of turn seven – one of several drivers to get caught out by marbles and dirt off the racing line.

Kobayashi claimed the final point – and the race’s fastest lap – ahead of team mate Perez. Paul di Resta struggled for grip in his Force India and was 12th.

Behind him were Massa and Raikkonen, whose tyre gamble saw him slip from second to 14th. Hulkenberg was 15th ahead of the Toro Rossos and Vitaly Petrov’s Caterham.

With both Marussias and HRTs finishing ahead of Heikki Kovalainen, Schumacher was the only driver who didn’t finish.

It was a race of contrasting fortunes for Mercedes. But having unlocked the performance of their W03 this early in the season, Schumacher must be optimistic about the races ahead.

Today, however, was all about his team mate. After 111 attempts Nico Rosberg claimed his first F1 win, and followed in the footsteps of his father Keke, becoming the third son of a Grand Prix winner to claim a victory himself.

87 comments on “Rosberg races to emphatic first win in China”