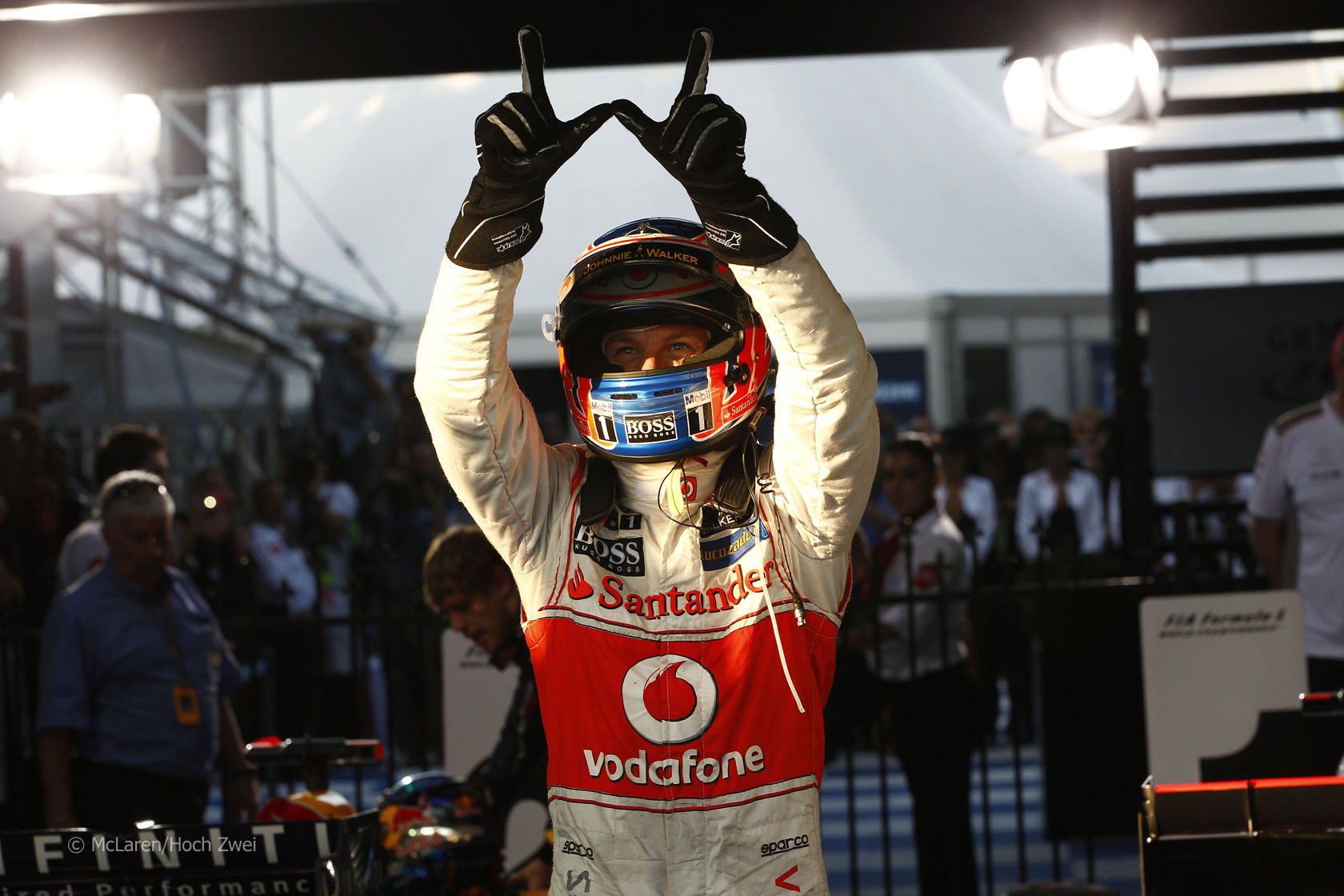 Jenson Button produced a dominant performance to win the first race of 2012.

He took the lead from team mate Lewis Hamilton at the start and never looked back.

Sebastian Vettel split the two McLaren drivers on the podium after a safety car period played into his hands.

A frantic first lap set the scene for the race: close action in the midfield, but at the front a consummate performance from Button.

As Hamilton bogged down, Button got “excited” and shifted up into second too quickly. Despite that he was was cleanly into a lead he rarely looked like losing.

From third on the grid, Romain Grosjean started slowly, finding trouble selecting second gear. Nico Rosberg, who started four places back, drew alongside him on the outside of the first corner. Rosberg braked later and made the turn, taking up fourth behind his team mate.

Grosjean’s race didn’t last much a longer. Pastor Maldonado dived down the inside of him at turn 13 on the next lap, the pair made contact and the Lotus’s front suspension broke.

Vettel picked off Nico Rosberg on the second lap, sweeping around the outside of the Mercedes at turn nine. He set off after Michael Schumacher, but went off at turn one on lap six and briefly fell back into the clutches of Rosberg.

Rosberg was under pressure from Fernando Alonso, who’d made remarkable progress from 12th on the grid.

Mark Webber made a poor start by his own admission and suffered damage to his RB8 in contact with Nico Hulkenberg. Having fallen to ninth he passed Maldonado when the Williams driver collided with Grosjean, and took up the running behind Alonso.

The other Ferrari of Felipe Massa had also started well and he too moved up at Maldonado’s expense. But within the fist ten laps he was struggling with tyre wear and Maldonado re-passed him.

Button pulled away quickly at the start, building up a 3.4s lead over Hamilton. His advantage was boosted by Vettel’s mistake and Schumacher’s retirement on lap 11. By lap 13, the closest driver to him besides his team mate was Vettel, 13 seconds behind.

Massa came in to shed his worn tyres on lap 12, and the drivers in front soon began to pit in response.

McLaren faced a dilemma familiar to Red Bull last year, of how to manage the pit stops of their drivers who were running one-two, without inadvertently handing one an advantage over the other.

“We give control for selection of the lap to the car in front,” explained Whitmarsh. So it was Button who came in first, followed by Hamilton on the next lap.

At their second stops McLaren brought both their cars in together: “We nearly did it at the first stop – we chickened out of that one,” added Whitmarsh.

Vettel followed Button in on lap 17. When Hamilton emerged from the pits on the following lap he came out behind Sergio Perez, who was repeating Sauber’s tactics from last year of running a long first stint on the harder tyre.

Hamilton spent a costly two laps behind Perez before using DRS to pass him on lap 21. Vettel, now within range of the McLaren, followed him past on the same lap.

The next man past was Alonso, who was running in an impressive fourth place in a Ferrari which had looked a handful all weekend.

Further back Rosberg and Webber were disputing fifth place. Webber took a brave look at Rosberg in the high-speed turn 11, but backed out of it just as Rosberg realised he couldn’t make the corner and took to the escape road.

The Mercedes driver pitted at the end of the lap, releasing Webber to hunt down Alonso. He took over a second per lap out of the Ferrari before Alonso, too, headed for the pits.

Hamilton loses out under safety car

After passing Perez, Hamilton initially made an impression on Button’s lead, bringing it down to under ten seconds. But by the time they were ready for their second pit stops the gap was back up to ten seconds and McLaren felt they could risk bringing both their drivers in on the same lap without losing any time.

They were ill-rewarded for this risky move as the appearance of the safety car shortly afterwards ultimately cost Hamilton second place to Vettel.

Vettel believed he would have had a chance at passing the McLaren even without the safety car appearance, which was triggered by Vitaly Petrov’s Caterham stopping by the start/finish line.

But in another respect the safety car was good news for McLaren, as the team had found they were using fuel at a quicker rate than they expected and needed to back off to make sure they reached the finish.

Having let the lapped cars move out of the way – a revived procedure that not all the drivers in the queue seemed to be ready for – the safety car released the field for a 17-lap sprint to the finish.

Button pulled 1.9 seconds out on Vettel at the restart. Behind him Hamilton initially kept Vettel in range before slipping back – the pair and Webber in a three-way stalemate.

Behind him the action built to a dramatic climax. Maldonado was piling the pressure on Alonso for fifth place and as they headed into turn three he braked desperately lately, almost hitting the back of the F2012.

A few corners later he came completely unstuck, battering the barriers at turn seven. He had been on course for sixth place – better than any Williams managed last year.

Further back his team mate’s race had ended after contact with the other Ferrari. Bruno Senna had been knocked into a spin on the first lap and was making a recovery drive. He tried to take Massa on the outside of turn four and the pair collided, putting both out.

Maldonado’s crash wasn’t the only last-lap drama. Perez made contact with Rosberg while trying to pass, damaging one of Mercedes’ tyres and dropping Rosberg out of the top ten.

The cars behind pounced and Kimi Raikkonen took three places in the final lap to clinch seventh.

Perez hung on to seventh while Daniel Ricciardo and Paul di Resta passed Jean-Eric Vergne for the final points places.

Both Marussia drivers were classified despite their car having done no pre-season testing. Timo Glock celebrated his birthday with 14th place.

Maldonado, Senna and Charles Pic were all classified despite having stopped, leaving just 13 cars circulating at the finish.

“Every lap it felt a little bit in doubt”

If Button’s run to victory had looked straightforward, he said it wasn’t. “Every lap it felt a little bit in doubt,” he admitted afterwards.

McLaren’s win shows they can challenge Red Bull’s supremacy in 2012. But despite their strong showing Hamilton looked distinctly unhappy after a race which saw him start first and finish third.