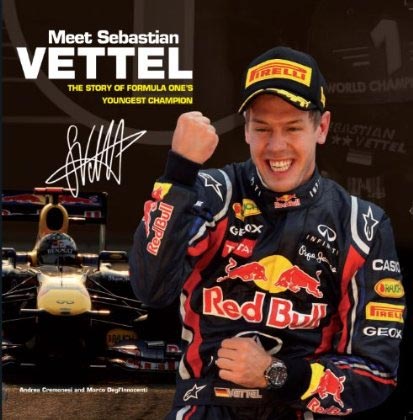 Sebastian Vettel is one of six world champions on the grid this year. Sadly, neither he nor his fellow champions are well-served by English-language biographies.

You can forget about reading up on Fernando Alonso or Kimi Raikkonen for starters. There are a few, mostly fawning, books on Michael Schumacher, though James Allen’s Michael Schumacher: The Edge of Greatness is an exception.

Inevitably it’s the British drivers who have the most English-language books written on them but even here the pickings are slim.

Take Lewis Hamilton, for example: when he burst onto the F1 scene in 2007, biographers were quick to take advantage of the popular but little-known new star.

As that championship drew to a close a succession of around half-a-dozen Hamilton biographies appeared and while a couple may have been worthy of your time the majority were flimsy, uninteresting cash-ins – not least of which the dreary authorised Hamilton biography.

Vettel made his F1 debut the same year as Hamilton. But while there have been a handful of books on him for the German market this is the first English-language biography of Vettel I’ve come across.

Even so the glossy, 142-page book has the unmistakeable feel of a cash-in. Much of the space in the book is given over to images and the large typeface used leaves you with very little reading to do.

But this is far from the worst thing about this book.

The organisation of the opening chapters is a baffling affair, making the book rather difficult to get into in the first place. It begins with a much-vaunted “exclusive” interview with Vettel, in which we get to learn all about what music he likes and what he thinks of the layout change made at Silverstone two years ago – less than riveting stuff.

The book then jumps around between ordinary prose and Q&As with other people. The disorientating feel is not helped by the vast swathes of images which break up the text for 20 pages at a time in places.

We learn little about Vettel that could not have been gleaned from headlines. In the chapter titled “from karts to F1” his junior racing career is covered in less than four paragraphs, and by the end of the first page he’s reached Formula 1 with BMW.

You might expect matters to improve when we reach the more familiar territory of Vettel’s F1 career. But no, it continues to regurgitate stories we’ve heard plenty of times before, and offers no new analysis, no insight, no revelations, not even any interesting new quotes.

What few details there are manage to get repeated: twice we are told who was the last driver to win a race in an Italian car other than a Ferrari, prior to Vettel’s breakthrough victory at Monza in 2008.

There seems little need to belabour the point: I was not at all impressed with Meet Sebastian Vettel. It reads more like a poorly-written forum post than a book with a ?é?ú15 retail price.

Aged just 24, Sebastian Vettel has the motor racing world at his feet, has won the world championship twice and is in the process of demolishing every record in the book.

This book somehow manages to make his story boring, and completely fails to do justice to one of the foremost talents of our generation. Avoid it.

F1 Fanatic earns a commission on products sold via the links to our affiliate partners above, however you are not charged any extra. See here for more information.