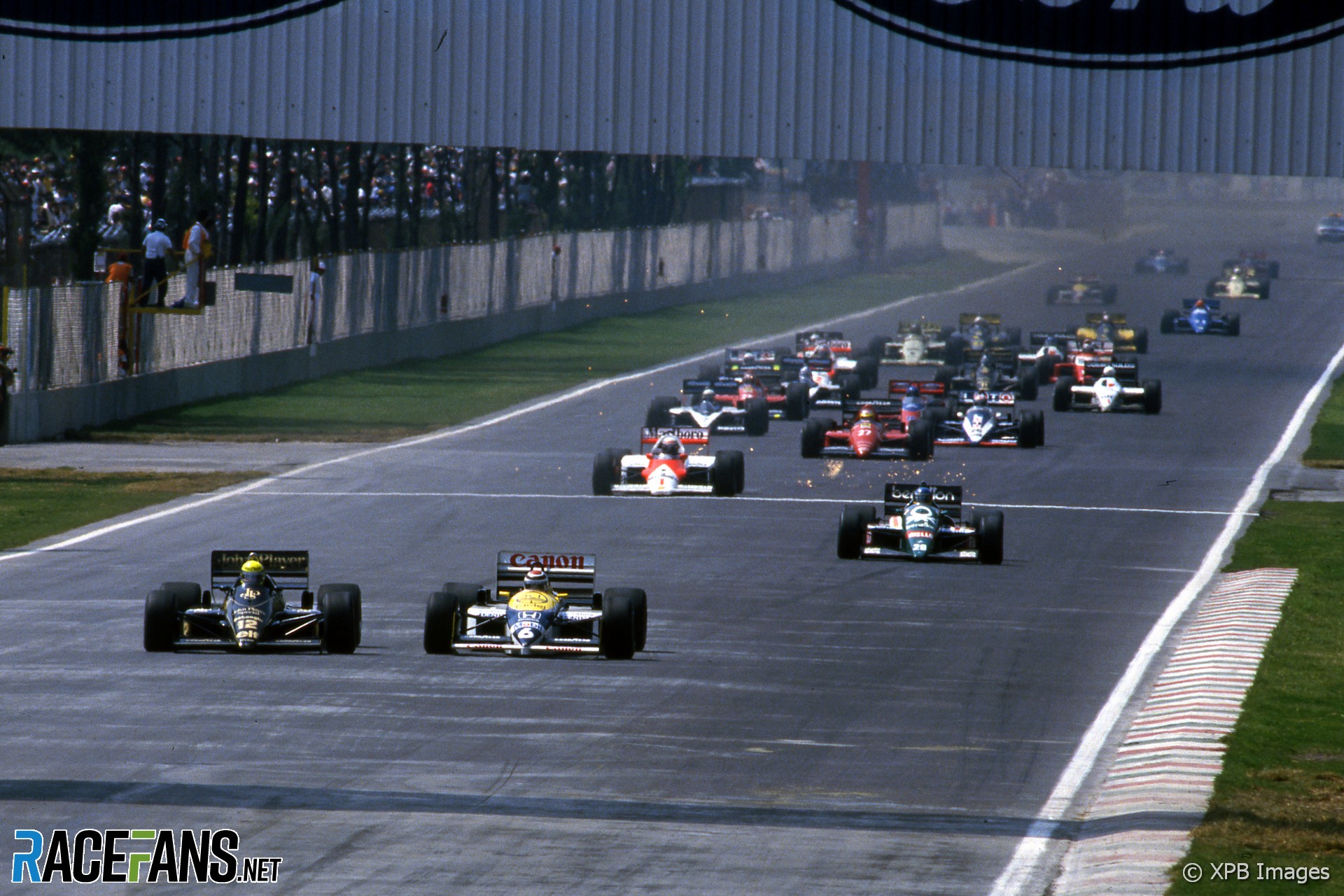 A dramatic twist in the 1986 championship 25 years ago today set up a three-way contest in the final round.

But championship leader Nigel Mansell was left to rue a disastrous race.

Mansell under a cloud

Journalist and BBC Radio 5 Live commentator Maurice Hamilton covered the race for The Independent. Like many of his colleagues, he was keeping an eye on the progress of the world championship leader:

“He wasn’t quite himself,” remembers Hamilton. “You could tell that he was very preoccupied and he wasn’t feeling too good.”

Mansell had fallen victim to a stomach bug known as Montezuma’s Revenge. Making matters worse, a stingingly critical piece about him appeared in a British newspaper that weekend:

“On Saturday morning the fax machine clicked into life. Somebody had sent through from London a piece by James Hunt in The Times.

“It was a very scathing piece. And there was the fact that it was coming from the last British world champion, saying things that a lot of people thought.

“Typical James: he was coming out with it in a forthright fashion, saying that Nigel was actually not popular in the pit lane.”

In his article Hunt said of Mansell: “His naivety may appear quaintly attractive to the public at home, but in the business it is often seen as crossing the border into foolishness – unacceptable in the sport’s standard-bearer.”

He added that paddock insiders: “by and large… do not want Mansell to win.”

This was the first glimpse the public had of Mansell’s fraught relationship with the media, which became more evident over the rest of his career.

“He just had this thing that unless you were writing nice things about him, you weren’t on his side,” said Hamilton. “Therefore you weren’t to be liked or trusted.

“He had this persecution complex – but the fans loved him to bits.”

Nor did Mansell have a happy environment in his team. He and Nelson Piquet had been at loggerheads since the season began, Piquet believing he had been promised number one status in the team, which he hadn’t received.

Formula 1 made its first return to Mexico since the 1970 Mexican Grand Prix. That race had been marred by severe crowd control problems as the spectators could not be persuaded to abandon their vantage points sat at the edge of the track.

Despite the after-effects of a series of earthquakes which had killed over 10,000 people (and possibly far more), Mexico successfully held the football World Cup earlier that year. Now it welcomed F1 back to the track in the heart of Mexico City, named the Autodromo Hermanos Rodriguez in honour of the late Mexican racing brothers Ricardo and Pedro.

But renovations to the circuit had not gone entirely to plan, as Hamilton explained: “Although they’re resurfaced it the equipment they’d used had made indentations in the track!”

This caused grumbles from the drivers when they took to the circuit for the first time on Thursday. The practice of giving drivers extra time to practice on a new circuit has since been abandoned.

The surface was been bumpy and low on grip. But the configuration proved decidedly satisfying with a long straight for overtaking, a Suzuka-esque series of fast, rhythmic sweeps, and the daunting 180-degree Peraltada at the end of the lap.

It was at this corner that Ayrton Senna showcased his astonishing skills by deftly catching the car as he hit a bump on the way to recording pole position on Saturday.

Mansell lined up third behind Piquet. He shared the second row with another driver who was feeling unwell – Berger.

He had been fastest on Friday in his Rory Byrne-designed Benetton B186. A problem with the BMW turbo on Saturday kept him from challenging for pole position, but he gave further indication of the car’s potential by heading the pre-race warm-up on Sunday morning.

But Huub Rothengatter’s weekend ended early as he crashed heavily in his Zakspeed. As the team had no spare car he was unable to take his place on the grid. With AGS not showing up the field was cut to 25 cars.

On race morning the last Mexican to start an F1 race, Hector Rebaque, did a demonstration run in a spare car belonging to his former team Brabham, to make up for the lack of local talent on the grid.

When the real action started, Senna held his lead as far as the first corner before locking up, running wide, and letting his countryman Piquet through.

But Mansell had made a far worse start. Unable to select first gear, he crawled away from the line in second and completed the first lap in 18th place. With no chance of a safety car deployment, he faced a long grind from the back of the field.

By lap 11 he had dispatched several of the stragglers and was up to ninth. But suddenly he was in the pits with a blistered right-front tyre – the stop dropping him back down to 17th.

Tyre wear became an overriding concern as the track cleaned up and more rubber went down. One by one the front-running drivers on Goodyear tyres were forced to make stops.

Berger non-stops his way to victory

Berger, with Pirelli tyres on his Benetton, took a different approach.

Having fitted harder tyres to the outside (left-hand) wheels and softer tyres on the inside – a practice which is forbidden by today’s rules – he gambled on getting to the end of the race without pitting. With no mandatory pit stop rule forcing him to change tyres, Berger was free to do this.

Meanwhile Mansell, Piquet and Senna all had to make multiple stops. Although each visit meant around eight seconds stationary – rather slower than the three-second stops we see today – the lack of a pit lane speed limit reduced the time lost in comparison.

Alain Prost managed to get away with making a single stop for fresh Goodyears. But his tyre conservation owed more to just his light touch at the wheel.

After his pit stop he felt his McLaren’s TAG turbo engine firing on only five cylinders instead of six. Driving to preserve both engine and tyres, he could do nothing about Berger, who crossed the finishing line 25 seconds ahead.

This was good news for Mansell, whose championship rival was denied an extra three points. Mansell was forced to call off his pursuit of Piquet after Stefan Johansson’s Ferrari blew its engine, dropping oil a large part of the track.

Riccardo Patrese spun off on the oil, promoting Mansell to fifth. But under the “best 11 scores count” rule he had to drop the two points he earned.

Senna was already out of the championship hunt and he finished third, his tyres severely blistered. Piquet was fourth, setting a new lap record in between his visits to the pits.

Philippe Alliot, who like Berger was also on Pirellis, collected the final point for sixth place. After the chequered flag he tried to give team mate Rene Arnoux and Johansson a lift back to the pits, but his Ligier also came to a stop.

Fortunately Piquet pulled up and found room for all three of them on his Williams, with Alliot straddling the engine cover.

For the driver and team who had just scored their first victories, this was a watershed race. Eleven years down the line, they also scored their final victories together, at Hockenheim.

At the previous race Berger had signed a contract to drive for Ferrari in 1987. It took Benetton two more years to score their next world championship victory.

In the closing stages Hunt, commentating for the BBC, raised the question of whether Williams should instruct Piquet to let Mansell past, giving Mansell an extra point.

This would have been an enormously controversial decision as Piquet himself was still in contention for the title. Thankfully, Williams did not do this, and in the end that decision did not have a significant bearing on the championship.

Mansell high-tailed it out of Mexico. “Because Nigel had screwed it up, when he got out of the car he just disappeared,” said Hamilton. “We never saw him. There was nothing to be said because he didn’t want to answer awkward questions.”

He moved on to the final round in Australia where tyre wear would once again play a deciding – and dramatic – role in the determining the outcome of the championship:

Martin Brundle’s race started well, the Tyrrell driver climbing from 16th to seventh, but ended in confusion and acrimony.

Two cars went past him as he backed off having seen a red light, which he mistakenly believed was signalling the end of the race. Team boss Ken Tyrrell launched a protest without success.

Do you remember this race? Were you there? Leave a comment below.