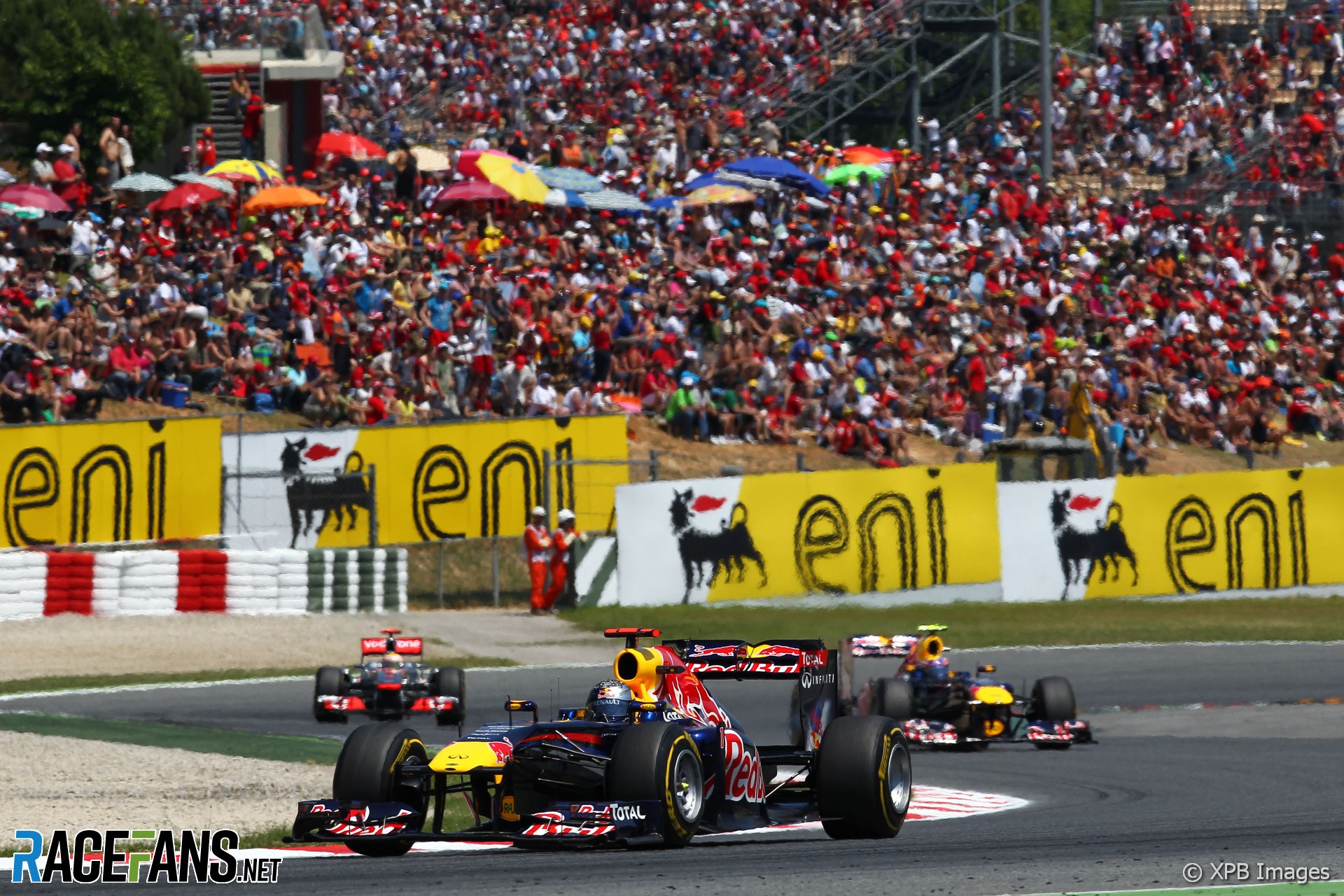 Sebastian Vettel clinched his fourth win out of five this year at the Circuit de Catalunya.

But it wasn’t as straightforward as his other wins as he had to cope with a faulty Kinetic Energy Recovery System and sustained pressure from Lewis Hamilton.

Vettel made a good start from second and passed pole sitter Mark Webber around the outside at the first corner.

But Fernando Alonso made an exeptional getaway from fourth place and dived past both Red Bulls to lead, to a roar of approval from the Spanish crowd.

Alonso held the lead but couldn’t leave the chasing Red Bulls and Hamilton’s McLaren behind – the leaders remained covered by a couple of seconds.

Vettel made an early first pit stop on lap eight to try to get ahead but Alonso reacted on the next lap, as did Webber. While Vettel picked off the likes of Jenson Button and Felipe Massa, Alonso stayed ahead.

Hamilton delayed his stop by another lap and came out in third ahead of Webber.

Vettel came in early for his second stop as well – heading for pit lane on the 18th lap – and Alonso stayed out, resigning himself to losing the lead. He also dropped behind Hamilton.

That left Vettel and Hamilton in a battle for the lead, and the McLaren driver was able to cut into the Red Bull driver’s lead. Radio messages between Vettel and his team revealed he was having to turn KERS off at times, and reactivate it later.

That allowed Hamilton to use the Drag Reduction System to close in on Vettel on the main straight, but couldn’t get close enough to try to pass. The RB7 was clearly faster than the MP4-26 through the faster corners on the Circuit de Catalunya.

With Vettel unable to back off, every driver bar the two McLarens and Red Bulls were lapped – even Alonso, who had led to begin with.

Button recovered from a poor start during which he fell to tenth place. He took Sebastien Buemi on lap three and later took Massa as well.

Once again he ran one fewer pit stop than most of his rivals and was able to stay of soft tyres for longer. He breezed past Webber and Alonso on lap 35 to take third.

Alonso made an early fourth pit stop for a second set of hard tyres but that couldn’t stem the huge amount of time he was losing to the leaders. It handed fourth to Webber who closed in on Button, but dropped off the pace at the end.

The two Mercedes were sixth and seventh, Nico Rosberg spend most of the race stuck behind Michael Schumacher, who made a very strong start.

Nick Heidfeld recovered from starting last by getting his hard tyre stint out of the way early on, then using his three fresh sets of soft tyres to carve through the field.

He passed Sergio Perez and Massa to take eighth and had just caught the Mercedes when the race finished.

Massa retired in the gravel trap at turn seven shortly after Heidfeld passed him. He’d struggled during the race and spun at turn ten shortly after putting hard tyres on.

Kamui Kobayashi in the other Sauber rounded off the points finishers – both drivers used hard tyres for their second stints and ended the race on softs.

Vitaly Petrov finished out of the points in 11th. Behind him were the two Force Indias, led again by Paul di Resta.

Having started in the top ten Pastor Maldonado could only finish 15th, two places ahead of his team mate with Jaime Alguersuari in between.

Jarno Trulli was the only Lotus to finish. Team mate Heikki Kovalainen crashed out on lap 48 and four drivers were later penalised for failing to slow under the resulting yellow flags.

The two Virgins and Narain Karthikeyan’s HRT were the final finishers.

Another victory for Vettel gives him a 41-point lead in the drivers championship over Hamilton, who is the only driver to finish a race ahead of him this year.

99 comments on “Vettel resists Hamilton to win in Spain”